Sonnet Technologies has expanded its family of professional media readers with the addition of the SF3 Series – Red Mini-Mag Pro Card Reader.

Featuring dual card slots and a 40Gbps Thunderbolt 3 interface, it is compatible with Mac, Windows and Linux computers with Thunderbolt 3 ports. 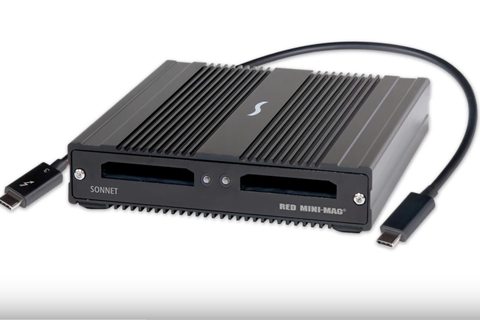 Designed for demanding workflows, Sonnet’s SF3 Series card readers are built with rugged aluminium enclosures and dual Thunderbolt 3 ports. These features enable users to stack and connect up to six readers in a daisy chain to their computer through a single cable, and ingest footage from four, six, or more cards simultaneously.

With the move to shooting footage in 8K and at high frame rates, Red Mini-Mags fill up fast, and the need for a tool that accelerates offloading footage from multiple cards is greater than ever.

By itself, one Sonnet reader can ingest files simultaneously from two cards at up to 1,060 MB/s, cutting ingest times in half (or better) compared to any single-slot reader available. Users can connect three Sonnet readers to their computer to exploit Thunderbolt 3’s 2,750 MB/s bandwidth and ingest six Red Mini-Mags in the same time it takes to ingest one card of the same capacity via any single-slot reader.

For digital imaging technicians working multicamera shoots or in a small space, the ability to stack multiple SF3 Series Red Mini-Mag, SxS and CFast 2.0 readers in the same footprint is convenient, while connecting them all to the computer through a single cable takes this a step further.

Being able to ingest multiple cards simultaneously means that users can complete the ingest process — without swapping cards — in a little as one-sixth the time required using single-slot readers.

For users who need to mount their gear in equipment racks, Sonnet SF3 Series readers include threaded mounting holes to support installation in a standard rack shelf, enabling side-by-side mounting of two readers in 1U of rack space.