More is more: Investigating attention distribution between the television and second screen applications – a case study with a synchronised second screen video game

Attention is a key concept for the design of second screen applications that are to be used while watching television (TV).

One of the key design goals is to balance the user’s attention between the second screen application and the TV content.

To investigate the influence of interactivity on attention and overall perceived workload and user experience, we developed video games with varying degrees of interactivity allowing users to play while watching a TV show.

The small games were synchronized with the TV show in both the temporal dimension (presenting games as the show progressed) and with the content (enabling users to play games similar to the storyline in the TV show).

Results from a laboratory-based user study show that highly interactive video games that are interleaved with the content, draw up to seventy percent of attention on the game (tablet) and are judged with a perceived workload similar to doing real ‘work’ while watching TV.

Nevertheless participants rated the games as fun to play with a high user experience.

Second screen applications are becoming more and more popular and widespread due to the growing popularity of tablets and smart phones.

These applications can considerably enrich the TV experience by providing more information or additional features, like background information about actors and movie plots, access to the movie’s web site, or other interactive features like quizzes or voting.

Second screen applications typically allow the user to interact with the content they are consuming such as TV shows, movies or music. The main characteristic is that additional information is displayed on a portable device - usually the smart phone or tablet.

The way that the content is enhanced (i.e. added value for the user) seems critical for the user acceptance.

Work by Basapur et al. (2012) indicates that the experience is only positive when the additional media are in sync with the TV show and that it provides information that is judged to be relevant. The primary and secondary screens have to give the user the feeling of having a holistic (and synchronized) experience.

From the user’s point of view, a high level of synchronization means having a holistic experience when using the TV screen together with a second screen application.

An example is a game where you play along with the main character on the screen; the game being only available during a specified time or scene during the show.

A low level of synchronization would describe an application that provides a TV experience only on the second screen without taking into account the content on the main TV screen. We refer to this category as TV stand-alone apps for second screens. 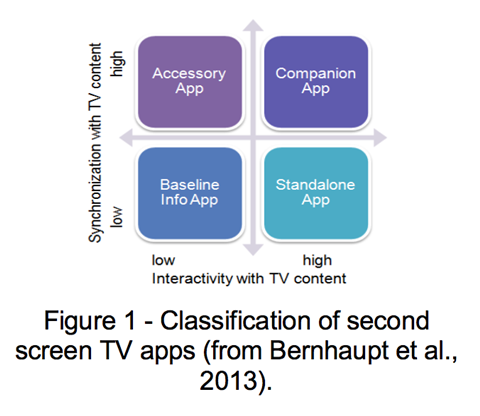 In terms of perceived interactivity, a high level of interactivity refers to a user interface design that allows the user to seamlessly interact with content on both screens (e.g. a jump-and-run game that is connected to the main screen content - and ideally would change the course of events in the movie or show).

A low or limited level of interactivity would refer to a simple selection of content on the second screen (e.g. an electronic programme guide that could enable parts of the content to be displayed on the TV screen).

Overall, what we would want to achieve is a positive user experience. But is this still the case when second screen applications are highly demanding?