NAB 2019: Tech giants and social media firms should be subject to greater regulation, according to NAB president and chief executive Gordon Smith,who accused them of damaging local journalism. 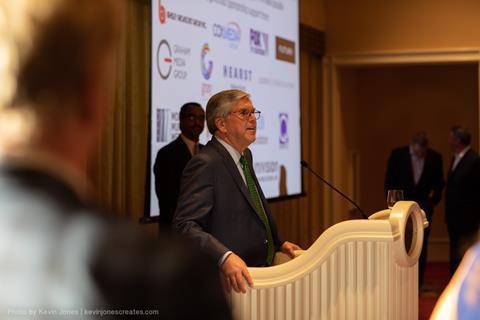 In his annual NAB State of the Industry address on the opening day of NAB 2019, Smith spoke about how broadcasters offer a lifeline during emergencies and their role in providing trusted, unbiased news.

But he said that local journalism had been “undermined by the rise of the internet and social media companies”.

“Now, some of these companies and our competitors are complaining that there’s not enough local news to feed their own news stream. This irony is not lost on me.”

Smith said social media companies would never have the same commitment to investigative journalism or connection with communities as local broadcasters and newspapers, and he called for US lawmakers to help broadcasters by “modernising outdated broadcast regulations to allow us to compete on a level playing field with these behemoth tech and pay-TV companies to better ensure that broadcast journalism can flourish”.

And he said there should be an “increase in regulation on the tech industry to ensure that these companies cannot use ther market power to stifle competition and the financial viability of local news”.

While Senator Warren’s Medium article referred specifically to Amazon, Google and Facebook, the only company named by Smith today was Apple.

While extolling the capabilities of ATSC 3.0, which combines over-the-air broadcast technology with over-the-top delivery to TVs as well as tablets and mobile, Smith questioned Apple’s decision not to include broadcast chips in its mobile devices and pondered whether “this growing tech power is one of the reasons why this consumer benefit is being held back by the manufacturers.”