New broadcasters: Zeitgeist of our time

Global digital media publishers are defining broadcasting with 80% of audiences opting for video, according to Vice and Refinery29 executives who discussed the power of harnessing platforms and chasing niche audiences. 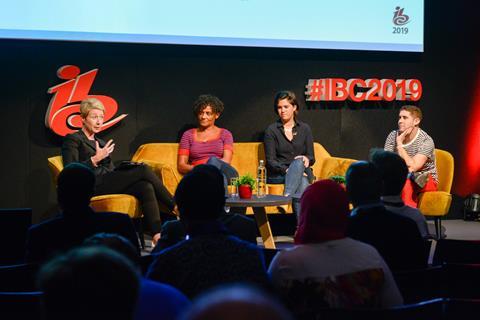 Engaging audiences across multi-platform interactions is a challenge modern media organisations are facing.

Speaking during the IBC2019 session ‘Digital publishing: The new broadcasters,’ Vice Media and Viceland/Vice TV production managing director EMEA Tamara Howe said: “We will go where our audience is watching… the sweet spot is when one or more businesses play into the success of another.”

The five main lines of business the global media company has includes its digital publishing arm, creative agency and studio business as well as its independent TV channel and news arm which is a large part of its core business model.

Vice Media has a “portfolio business which helps to spread the opportunity and take the risk out of one line of business,” Howe said.

Refinery29 International president Kate Ward explained the women-focussed media and entertainment brand has become a destination to serve “female audiences which are considered under-served,” she explained. “We were led by the audience and it took off.”

Refinery’s founding mission was to inspire women all over the world. Founded in 2005 as an e-commerce product initially, it expanded into a more traditional publisher and now includes live events, original programming and a creative agency. Howe attributed its success to following the interests of its passionate audience.

She said: “We think of ourselves as a category defining brand which means something to our audience, above and beyond watching a single piece of content we are an advocate for them and our rebrand we have done over the last 15 years has been really critical.”

Howe and Ward agreed it’s a balancing act to prioritise new technology whilst acclimatising to audience expectations to delivering meaningful content all whilst trying to monetise and remain relevant.

In a major consolidation, Vice Media announced it has agreed to buy Refinery 29 which will see the two companies rebranded as Vice Media Group.

Ward explained its advertising business connects brands to young women and the majority of its focus is through branded content and distinctiveness.

She said: “We have an unbelievably high level of engagement by using data and insights to provide the depth of understanding.

“Our originals business as well and creating programmes for other people and grew over 100% last year.”

Offering delegates some background on Vice’s shift in business strategy, Howe explained the value and logic behind the decision.

She said: “I joined 18 months ago, where Vice was organised by country, 30 or more territories with different leadership teams and infrastructure and different strategic priorities.

“Nancy Dubuc (chief executive of Vice Media) took out the duplication of the system and drive efficiencies to ensure the business were aligned around one strategy, pulling in the right direction and created accountability for a share strategy.”

She said nine months in and the business is seeing the difference, moving to profitability.

Ward said: “Audience focus is significant on our dot com business which has just over 30 million unique views per month.

“One of the leading sites in the area and we have always been very focussed on that. We have a thriving community on Instagram but an amazing email product.

“Dot com is and always will be at the centre of that ecosystem with our most loyal and highest engaged audiences.”

Since confirming its acquisition of Refinery 29 this week its certain the coming months will be interesting time for the newly formed Vice Media Group.

Howe added: “The problem for entire industry is not being brand safe.

“With the younger generation coming through and Gen Z particularly won’t tolerate environments where they are not reflected.”

A “rich place” to grow communities is Instagram. Ward said to tailor content for each platform is critical.

“It is about being willing to experiment and that is where the best stuff happens as we are a progressive brand and the cultural impact is important because people are at the cutting edge and experimenting with technology.”

Harnessing audience data to deliver the best content experiences was echoed by both speakers.

Howe explained: “It is very important to place branded content but when we share content it is about building communities and serving those communities and we use each channel very differently.”

However data without insight is not good, they both agreed. Ward said: “Joining editorial teams with cutting edge technology and data enables a coming together where you get something special.”