Live production systems developer EVS has teamed with Blackbird, creator of the eponymous web-based editing tool, to embed a new product that both parties are touting as game-changing.

The product, IPD-VIA Create, embeds a full editing suite into a production asset management system, a feat that Blackbird claims is a first. 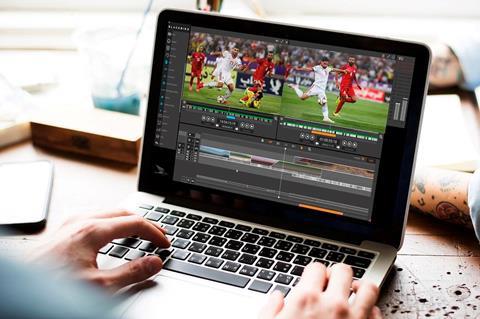 EVS has teamed with Blackbird to embed a new product

The five-year deal that EVS has made to licence Blackbird technology could see dozens of the biggest names in global sports production adopt web-based editing as a prelude to moving workflows wholesale into the cloud.

“We’ve made a major long term strategic chess move to give EVS the opportunity to upsell to their current base a system that will enable their customers to instantly edit during live capture,” Blackbird CEO, Ian McDonough told IBC365. “EVS realized the strategic importance of web editing within a PAM which has not been done before. It enables live content to be edited and published literally seconds after capture.”

Previously content for highlights editing and clipping to social media would need to be downloaded into another system (typically an Avid or Adobe Premiere) and then publishing from there. McDonough says this meant production teams having to wait until the end of the first half of a game before beginning edits.

“EVS IPD-VIA Create powered by Blackbird is all about enabling huge time savings so users can capture while editing and publishing. It is a game changing product for the market.”

He added, “Previously there would be two tools, a second interface and an additional knowledge base to learn. Now all operators work within the same system.”

The Blackbird toolset is accessed through a browser on any laptop with an internet connection from just 2Mb/s. It is embedded in EVS’ PAM called MediaCeption Signatur. As a result, users can work with their assets from anywhere in the world and immediately view and push edited content to craft editors or directly distribute it to multiple channels.

The product is being rolled out to a “significant” though unnamed customer and has already been used in anger, according to McDonough.

In this case Blackbird is being adopted as an on-prem solution but since it is a cloud-native product it is ready for when customers want to switch to full cloud production workflows. The deal also enables EVS to rollout Blackbird tech to its entire customer base on prem.

“These are long term deals. The company that EVS is rolling out to has a ten year equipment cycle. Deals like this are a long-term annuity for us. The hard work has been done on the technology and it’s great for us to watch how the benefits are being appreciated.

“Every EVS customer of IPD-VIA can take advantage of our codec and video library and Blackbird’s carbon efficiency.”

Blackbird commissioned research has evidenced that its tech generates up to 91% less carbon and is 35% cheaper to run than cloud-based and on-premise editing systems, as well as being up to four times faster for creating and distributing content.

Nicolas Bourdon, Chief Marketing Officer at EVS said: “Since the edit-while-capture concept is at the heart of everything we do, this is a huge time saver for MediaCeption Signature users who can begin working on their projects while feeds are still being recorded and ingested. IPD-VIA Create is an exciting addition to our end-to-end live PAM workflow, as it enables faster and more efficient editing in live production, which ultimately will help production teams reach the finish line faster.”

2022 has been a “huge” year for Blackbird as a company, said McDonough. It saw a 78 per cent growth in half year revenue (to over £1.5 million) and was awarded the IABM’s Broadcast/Media Company of the Year – supported by IBC. Revenues grew by 78% in the first half of 2022, with overseas sales growing by 314% over the past three years. Blackbird received a Queen’s Award for Enterprise for International Trade 2022.

FIFA is already using Blackbird for its FIFA+ service. Other highlights this year include a deal signed with SBS Belgium to produce media assets for its OTT platform and the three year renewal of a deal with A+E Networks. At IBC 2022, the company partnered with both Microsoft and EVS.

A new version of the product targeting social media video content creators is being readied for launch in 2023.

“We have been growing our product and development teams to launch a glass to glass product for the media industry and the Creator Economy,” he said. “It will be a highly available SaaS solution.”