Day 3 of IBC2022 didn’t let up with sessions across Changemakers, Showcase Theatre, Content Everywhere and the Innovation Stage. There’s a very real sense of positivity. 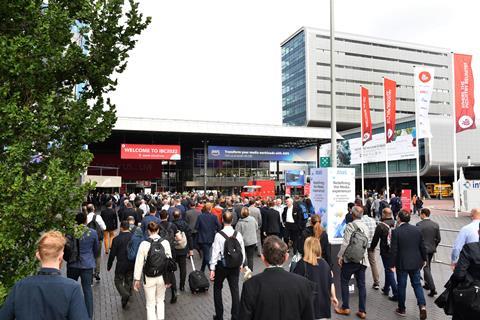 “It’s great to see, feel and hear the buzz of a live IBC once more,” said Michael Crimp, IBC’s Chief Executive Officer. “The quality of visitors has been outstanding and there is a real sense of positivity. I would like to thank everyone here at the show for their confidence and support. We are stronger together.”

“It feels great to be back in Amsterdam,” said Avid CEO Jeff Rosica. “It’s pretty clear that IBC has pulled off a pretty successful show.”

“It’s great to be back and have personal talks again, personal relationships, and that’s what counts,” said Stephan Schenk, General Manager Global Sales and Solutions at ARRI.

NextGen TV comes into focus at IBC2022
The roll out of ATSC 3.0, also known as NextGen TV, was a major focus of discussion at the first of the IET Media Technology Network’s John Logie Baird Lectures.
From the session: The State of the TV Business and the Next 5 Years

FAST channels thrive as viewers look for ‘lean back’ viewing
”The FAST market has proven that people still like this ’lean back’ viewing paradigm,” said Robert Gelick, Chief Product Officer at Paramount. “And that’s where we’ve seen a lot of success.”
From the session: Transitioning Linear and VOD and Introducing the Simplicity of FAST

Pushing the envelope of film editing
Since making the leap from TV to film for a co-editing role on Scott Pilgrim vs. the World, Paul Machliss, ACE has perhaps become best known for his long-time collaboration with the film’s director, Edgar Wright.
From the session: American Cinema Editors Present: Paul Machliss, ACE in conversation with Carolyn Giardina

How radio broadcasters can thrive amid automotive ‘revolution’
“If someone tells you today that the station logo on its own is good enough, that is wrong,” said Gereon Joachim, Vice President Automotive Sales & Strategy, EMEA at Xperi.
From the session: New opportunities and new audiences on DAB+

Featured video - Highlights of the Accelerator Programme at IBC2022

And finally… Here’s what’s coming up on Day 4

Day 4 Preview: EDCF, immersion, LCEVC and esports innovation
Here we take a preliminary look at some of the key moments planned for the final day - Day 4 (Monday, 12th September) - of the IBC 2022 Show, which include two Changemakers tracks, as well as the Showcase Theatre, Innovation Stage and Content Everywhere stages.