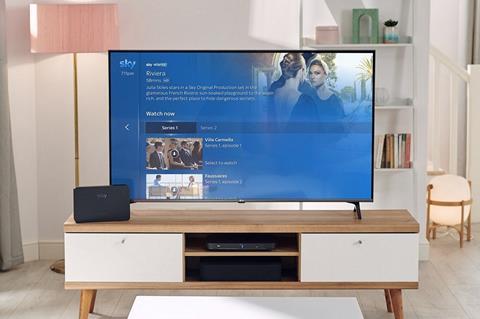 Sky Group has announced upgrades to its Sky Q set-top box including new HDR content and a boost to voice discovery tools.

The overhauled Sky Q will pack an updated and expanded user interface (UI) replacing the static menu bar with a dynamic collapsible menu that aims to present more content for viewers and reduce search times.

Each Sky Q show will have its own “Centre” where all seasons, episodes, recordings, broadcast schedules and on-demand links will be together in one place for the first time.

Sky is also taking a nod from streaming services such as Netflix by including a “smart button” that will prompt viewers to watch the next episode or continue to watch unfinished episodes.

The updated UI will also include new sports centres offering all the latest games, news, documentaries, fixtures, podcasts and tables for sports that Sky broadcasts, as well as those available from BT Sport and terrestrial broadcasters available on Sky Q.

Sky said it is also improving its Voice Discovery technology to make it easier to search for content by genre, themes or stars.

Sky launched HDR on Sky Q earlier this year, but it is now expanding the offering to include Disney+ - the Mouse House’s streaming platform – in HDR as well. It will also begin to offer Sky Nature shows, Sky originals and Sky Cinema movies in time for Christmas, with Sky Sports to begin offering HDR content in 2021.

Fraser Stirling, group chief product officer, Sky, said: “We’ve redesigned Sky Q to make it even smarter, simpler and better at aggregating all of the TV and app content you love into one place. A new-look UI, improved voice search and more intuitive navigation make everything easier to find without having to search around, so you can get to the next episode of Succession, a brilliant football podcast, or choose from the most popular British dramas easily.

“And we’re not stopping there, the tech team behind Sky Q and Sky Go are working hard on loads of new updates that we’ll be rolling out every few months, so you can expect your Sky TV experience to keep getting better.”

Sky has struck a long-term partnership with Sony Pictures Television that includes access to Sony’s feature film back catalogue.

The new long-term partnership covers the UK and Ireland, Germany, Italy, Austria and Switzerland. all new and future Sony Pictures Entertainment feature film releases - including recent releases Jumanji: The Next Level, Little Women, Bad Boys For Life and the forthcoming sequel Peter Rabbit 2 - will be available on Sky Cinema.

The parties have also extended their deals to make the titles available on all of Sky’s transactional services across all its markets – Sky Store and Sky Primafila as well as streaming services – Now TV, Sky Ticket, Sky Show and Sky X.

Mark Young, regional executive vice president, Western Europe, Sony Pictures Television said: “We are delighted to extend our special relationship with Sky through this new and improved Movie and TV series deal. The industry is going through a dynamic and challenging time and our continued partnership is a tremendous way to present the full power of our library, in conjunction with our most popular titles, to Sky customers across Europe.”