Lionsgate-backed streamer Starzplay is now available in more than 60 countries following a rapid global roll-out over the past three years. 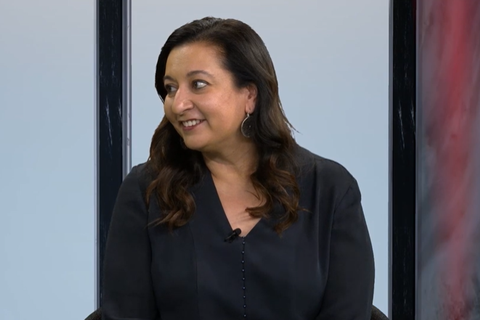 Superna Kalle, president of international networks at Starz, told IBC Digital that her role is to bring the global streamer into every home in the world outside the US.

She noted that the streamer operates under three brands: Starzplay Arabia for the Middle East and North Africa; Lionsgate Play for South Asia and Southeast Asia; and Starzplay for Europe, Latin America, Japan, and Canada.

Starzplay international subs have nearly doubled over the past year to 7.5 million. Explaining the rise, Kalle said that during Covid-19 lockdowns, audiences around the world who were stuck at home discovered Starzplay and its shows such as Normal People, The Great and Power Book II: Ghost.

“[They] really just rose to the top of the charts for us – we’re really quite happy with the reception we received in almost every single country.”

Added Kalle: “Global audiences are finding stories from other cultures and other countries in languages that are outside of their own home country…it’s something that we have leaned very heavily in on lately.”

Starzplay is available as a direct-to-consumer proposition, but the streamer is also working with partners such as Amazon Channels in many countries and Viaplay in the Nordics.

While its direct-to-consumer app allows Starzplay to “harness a tonne of data”, these partnerships with the likes of Amazon and Viaplay were important for reaching customers stressed Kalle.

“Amazon Channels…own the customer, but we work super closely with them to make sure that our brand is front and centre on their homepage,” said Kalle.

She also said the partnership with Viaplay had allowed Starzplay to launch into the Nordics for the first time.

“It’s important to us that our brand stands for something that you wouldn’t see on broadcast television, certainly. We’re very, very premium in production values, writing quality and in character.”

“We’ve got multiple different models, and each country is a little bit different in terms of how we approach it. And each partner is different. But in terms of what we look for with a partner, we look for trusted brands that people recognise and that have a fantastic funnel of people coming in onto their platform who can then find us.”

Starzplay carries content from Lionsgate, studios, and independent producers. “We aim for at least one new exclusive hit show every month. We don’t tend to put things on that are - for lack of a better way of saying it - flanker content,” said Kalle, who pitched the streamer as a “beautiful complement” to more broad-based streamer services.

“We lean very heavily into crime and high drama - authentic storytelling, no matter the origin of the country, or the writer or the producer. We look for very edgy. We lean heavily into sex as well, I think more than a lot of other [streamers]. Any kind of bad thing, we’re all over.

”It’s important to us that our brand stands for something that you wouldn’t see on broadcast television, certainly. We’re very, very premium in production values, writing quality and in character.”

The service is also priced competitively, she noted, at €4.99 in Europe. “It’s certainly not super expensive. We’re priced accordingly in Latin America as well.”

Kalle said that Starzplay original programming has also “ramped up”, both with US productions coming from Starz and via Starzplay local-language commissions. For example, the streamer is rolling out a slate of six Spanish language originals starting with Malayerba.

Kalle explained that each of Starz’s three key brands offer slightly different content from each other. South Asia and Southeast Asia service Lionsgate Play, for example, has a lot of first run films from Lionsgate.

“They tend to be a little bit more family friendly than we are. And so, you’ll find shows on there that you can watch with your grandmother and your daughter…whereas for us, we tend not to do that.” Lionsgate Play also has a lot of original Hindi language content, including new launch Hookups and Hiccups.

There have been reports in recent months that Starz may at some point be spun-off as a separate company to its listed parent Lionsgate.

Asked about this, Kalle replied: “I think that management has spent a lot of time and effort building up Starz and Starzplay and the international division. And I don’t think that we’re getting the value from the stock. So, I think that it’s early days, and so we’ll have to see what happens.”