Women received just 21.6% of all VFX credits across the top 400 grossing films from 2016 to 2019, according to a new report titled Invisible in Visual Effects.

The report by Stacy L. Smith, the Annenberg Inclusion Initiative and Women in Animation explored women’s participation across the VFX industry.

It calculated that there is a ratio of 3.6 men to every one woman working in VFX.

The report found that women held 16.2% of all senior positions across the four-year period. This varied by position, however, as women comprised only 2.9% of VFX supervisors but 46.7% of VFX producers.

“The lack of women in the visual effects industry is part of a larger pattern of exclusion across the film industry,” said Smith. “VFX companies and studios have to think critically about their hiring and promotion practices as well as the cultures they create internally if they want to see more women and in particular women of color ascending to leadership roles.” 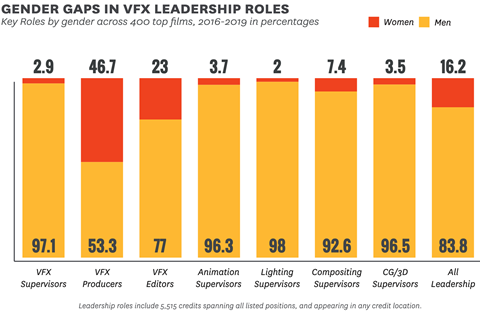 The study included an examination of the pipeline positions that lead to supervisory roles. The authors note that women fill between 13.9% and 21.5% of pipeline jobs, but these figures plummet to less than 10% of leadership positions. Even in producing roles, women fill nearly two-thirds of production coordinator roles, but their prevalence drops to less than half of producers. “There are clear leaks and cracks in the pipeline for women across the ecosystem of the VFX industry,” Smith.

The report also provides insight into the leadership profile of 60 top VFX companies. The companies were chosen based on their work across top movies. Overall, slightly more than one-quarter (26.9%) of executives at these companies were women, and 5.5% were women of colour.

“As the data from this landmark study shows, there are clearly obstacles in place for women in the realm of visual effects. We hope that this fact-based awareness will open more doors and repair broken rungs on the leadership ladder to create a more diverse and inclusive environment in this sector of the entertainment industry,” said WIA president Marge Dean.

Another area explored were awards related to visual effects. Only one woman has been nominated for and won an Academy Award for Visual Effects. At the Visual Effects Society Awards, women fared better — 12.8% of nominees between 2016 and 2020 and 9.3% of winners. Women of colour comprised 2.1% of nominees but none have won an award in the time frame examined.

Overall, slightly more than one-quarter (26.9%) of executives at these companies were women, and 5.5% were women of colour.

Responses to the survey indicated that three factors contribute to prevent women in VFX from reaching positions of leadership. These include issues related to workforce composition and the prevalence of men in the industry; workplace culture that does not meet women’s needs around work/family balance or encourage their participation; and leadership perceptions that link supervisory roles to masculine traits.

The report is the latest from the Annenberg Inclusion Initiative and can be found online here.