Google, Vimeo, Twitter, Netflix and Facebook were among many technology companies who yesterday rallied together in support of net neutrality, ahead of the Trump government’s proposed rollback of an open internet.

Net neutrality is the concept that all internet traffic should be treated equally.

The US Federal Communications Commission (FCC) Chairman Ajit Pai, recently appointed by President Trump, proposes to abolish the open internet standards implemented in 2015 by the Obama government. There are fears that such changes would allow internet service providers to charge websites and users for access to certain sites and content.

Yesterday’s day of action was part of to educate consumers and viewers about the role of a free and open internet .

Leading global technology giants hosted messages, banners and slowed down their user interfaces yesterday to illustrate the likely outcome if the legislation to rollback an open internet went ahead.

Vimeo General Counsel Michael Cheah said in a blog post the potential roll back of the internet regulations has caused huge online protests.

He said: “Net neutrality made it possible for Vimeo, along with countless other startups, to innovate and thrive. The FCC’s proposed rollback of the 2015 open internet rules threatens to impede that innovation and allow a handful of incumbent ISPs to determine winners and losers.”

Netflix took to Twitter to share its solidarity, posting a tweet showing the impact a change in regulation will cause. Buffering is one of the fears as internet service providers regulations will ultimately create a slow and regulated internet. 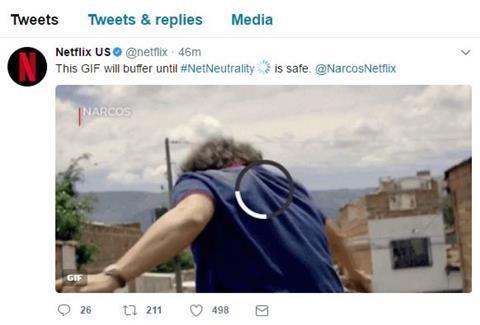 She said: “Net neutrality is foundational to competitive, free enterprise, entrepreneurial market entry — and reaching global customers. You don’t have to be a big shot to compete. Anyone with a great idea, a unique perspective to share, and a compelling vision can get in the game.

“Without the guiding principles of net neutrality, it is entirely possible Twitter would not have come from a somewhat quirky experimental 140-character SMS service to where we are today.”

The BBC has raised concerns regarding a change in US legislation and the implications for countries beyond the US.

A BBC Spokesperson said: “The UK has a strong commitment to net neutrality which is included in its law.

”The BBC thinks an open internet is important to ensure freedom of expression and allows people to use legal online services and devices when they chose to.

”It also means content providers such as the BBC can reach and innovate for all audiences without any restrictions. While the US market differs from the UK, the BBC would be concerned if global trends resulted in any weakening of net neutrality protections for audiences and the services we provide them.”

A free internet in jeopardy

The US-based Internet Association’s mission “is to foster innovation, promote economic growth, and empower people through the free and open internet”.

Internet Association President and CEO Michael Beckerman in a statement said: “Net neutrality is fundamental to the continued success of the internet.”

“Without strong, enforceable net neutrality rules in place, innovation online will be stifled, consumers will have fewer and worse choices across the web, and the next generation of ground-breaking websites and apps will never come to be,” he said.