The future is artificial: AI adoption in broadcast and media

Artificial intelligence is just at the start of its adoption curve, according to research conducted by the IABM. 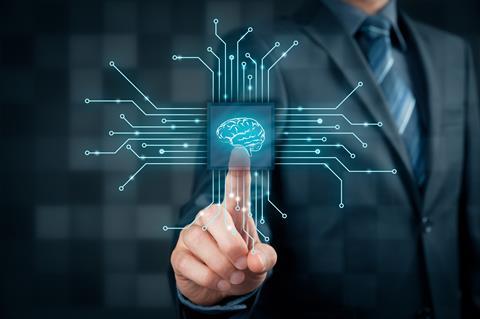 Machine learning (ML) and deep learning (DL) can both be considered as sub-sets of the wider AI field.

ML, an early application of AI, provides computer systems with the capability to learn from data without being programmed.

DL is a further development of ML enabling computer systems to imitate the workings of the human brain in problem-solving. The advent of DL can be traced back to the emergence of Artificial Neural Networks - a system of hardware and/or software modelled to mimic neurons’ interconnections in the human brain.

AI was once confined to science fiction. Its history has been characterised by boom and bust cycles similar to the workings of a modern economy. The “booms” have generally entailed a rise in expectations and optimism with regards to AI research while the “busts” have abruptly exposed the mismatch between these expectations and actual achievements.

Some of the issues that prevented early AI experiments from achieving any progress in the past included the limited storage and processing power capabilities available.

In the 21st century, AI technology has benefited from the exponential increase in processing power and storage capabilities as well as the rising amount of information made available by the internet revolution.

Today, AI looks capable of fulfilling the promises set in the past. At IBC2017, AI was for the first time one of the main themes, both at the exhibition and in the conference sessions. Data is now considered one of the key elements (if not the most important) in media companies’ future strategy.

However, according to IABM End-User Survey data, AI adoption in broadcast and media is still at an early stage, as this chart shows: 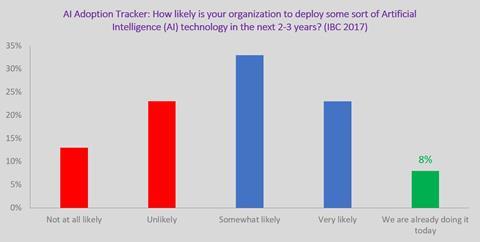 These results show that AI is just at the start of its adoption curve.

However, the low percentage of companies that have adopted AI masks the quick increase in adoption of the technology.

In fact, according to IABM End-User Survey data, between April and September 2017, the percentage of media technology suppliers saying that they are unlikely to adopt AI dropped from 57% to 36%, indicating increasing awareness of the benefits of the technology – the percentage of respondents saying that they already deploy it also increased from 5% to 8%. In the same time span, “Big data analytics & AI” jumped from the #13 to the #10 position in the IABM technology priority index. 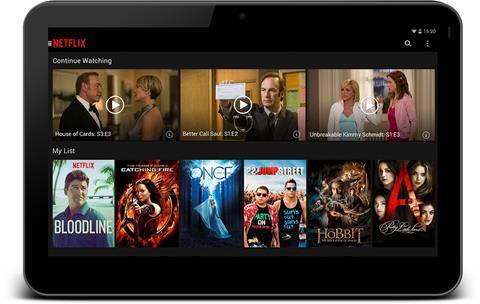 AI also guarantees increasing insights into audiences. These can be used for content monetisation – e.g. in advertising and content licensing – and customer retention. In fact, audience data can be transformed into effective customer retention campaigns or can be fed to personalisation algorithms to establish more personal relationships with viewers, which is key in a direct-to-consumer model.

According to the IABM End-User Survey, media technology buyers plan to apply AI mainly to content management and distribution workflows, with a large share of respondents saying that they actually plan to use AI throughout the content supply-chain.

Content management is a natural area of application for AI technology. Although the unstructured nature of video and audio data makes it more difficult to classify, advances in techniques such as image, emotion and speech recognition have enabled media technology buyers to increasingly rely on AI tools to organise and search their content archives.

The process of tagging content is very manual and expensive, so it is a no-brainer to replace it with AI technology. By increasing the level of detail of the metadata, search on content management systems becomes more precise, thus boosting monetization opportunities.

“Although we have an entire archive that goes back to the 1930s, we can’t actually find anything efficiently. If you can’t find anything, you can’t sell it, and you can’t make money. So this [AI] is big for us.”

Content distribution is another hot area of application with end-users – the second most important according to our respondents.

Algorithms can be deployed to automate and optimize the network efficiency management of a Pay-TV operator, alleviate bandwidth issues in streaming and deliver increasingly personalised experiences to viewers.

The company at the cutting-edge of AI use for distribution is Netflix, which uses AI not only to suggest better content depending on viewing preferences but also to optimise video compression and delivery.

While production and post-production were lower on the list, AI has the potential to automate parts of the content creation and editing process as well.

These topics are discussed in IABM’s newly published Media Tech Trends report on Artificial Intelligence, which is available free of charge to IABM members.

This stream of research tracks the adoption of specific emerging technologies within the broadcast and media sector, enabling IABM member companies to better understand their adoption drivers and use cases at customer organisations.

Some of the analysis will be also included in the upcoming IABM Business Intelligence Digest, which will be distributed at IABM’s flagship event this year: IABM Annual International Business Conference & Awards.

This conference, held in London, on 30 November and 1 December 2017, brings together leading figures from within the broadcast and media industry to stimulate dialogue, in a non-commercial environment, between suppliers and end-users around a broad range of industry challenges.