The growing popularity of podcasting with listeners as well as new dynamic forms of advertising technology are sparking renewed interest in the sector from brands large and small.

It may one of the smallest media sectors, but the podcasting market is enjoying a boom – and the advertising industry is taking notice.

Consultancy Deloitte predicts that the global podcasting market will increase by 30% to reach $1.1 billion this year, surpassing the $1 billion mark for the first time.

These numbers may not look like much next to radio’s $42 billion and music’s (recorded and live) $51 billion global annual revenues. But in a world where overall media and entertainment growth stands at just 4%, a 30% annual growth rate is impressive, even considering the low base that podcasting is starting from.

Listening numbers are also rising. Around 7.1 million people in the UK now listen to podcasts each week, according to figures from Ofcom. That’s one in eight people and is an increase of 24% over the past year – and more than double over the past five years.

Podcasts are now available on a wide range of platforms, with Spotify and Apple’s podcast app battling for market supremacy alongside a host of others including BBC Sounds, Acasta and Stitcher.

“From an advertising perspective podcast content ticks all the boxes.” Dan Jennings, Wavemaker

Advertisers have taken note of the podcast surge. “There’s an increasing number of brands using podcasts,” says Liz Duff, head of media and investment at media planning and buying agency Total Media, whose clients include TikTok, Slack and Lenovo.  She recalls podcasting first gaining interest more than ten years ago. “We talked to advertisers about it as an opportunity, but it never really went anywhere. And then in the last couple of years, there’s been a resurgence in popularity with consumers and with brands.”

Resurgence
The reasons for the podcasting resurgence are manifold. In 2012 Apple produced the iPhone podcast app, which proved a popular library system for listeners. This was followed by a dramatic improvement in inexpensive recording production and editing equipment. The growth of 4G mobile phone connections and widespread wi-fi also meant listeners could browse, download or stream shows whenever they wanted. 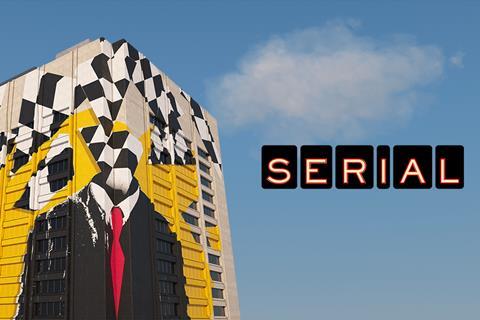 Serial: The global phenomenon has over 340 million downloads

But, arguably, the breakthrough moment for podcasting came in 2014 with the launch of investigative journalism podcast Serial which was told over multiple episodes. The first and second seasons of the show have had more than 340 million downloads.

Crucially for advertisers, podcast listeners tend to skew young, and to be better educated and earn more than the average population, according to research. Podcasts reaches a generation of individuals who turn to mobile phones for media consumption and have a desire for on-demand content that aligns closely with their personal perspectives and interests.

“From an advertising perspective podcast content ticks all the boxes,” says Dan Jennings, head of production and project management at Wavemaker, the WPP owned media agency whose global clients include Netflix, Adobe, Huawei and British Airways. But he stresses that podcasting needs to be seen as ‘part of the full media mix’ for advertisers. “The podcast market is not a solo offering.”

The small size of the market, plus the sheer number of podcasts available, means that advertisers would struggle to reach a mass market through podcast focused campaigns. Instead, they must be used alongside more traditional medium, whether radio, digital, TV, print or outdoor.

What advertisers do like about podcasts though is its audience. “It offers such an engaged, personalised and unique environment – you really can talk to people on a very individual level,” says Total Media’s Liz Duff. She says Total Media’s publishing clients such as Hodder & Stoughton and Macmillan Publishers are big fans of the medium “because there’s such a perfect synergy between storytelling and talking to people in that mindset.”

Jennings notes the diversity of the market too: “There are podcasts that reach huge audiences, so you can easily hit those KPIs (key performance indicators). But there are some niche, more targeted podcasts that allow you to connect with the right listeners.” He says the podcast market is hugely valuable to advertisers because it allows them to direct messages straight into people’s ears – and they are listening.

“Unlike radio, which is more of a live stream, podcasts are on-demand and let users bring audio programming with them wherever they go with most people listening through their headphones,” says Jennings. “This type of advertising is more effective and very dynamic as it lets you have one to one connection with the users.”

Jennings cites a Wavemaker campaign for Public Health England, where it created the UK’s first bespoke breastfeeding voice assistant. It’s looking into advertising this voice system on podcasts targeted at new mums who own smart speakers. “As the podcast market allows you to be very granular with your approach and define your preferred location, demographics etc., you can tailor the tone of voice in your messages to the specific target group and collaborate with the right people within the podcast industry.” This could be through advertising or branded content.

Hey big spender
The amount that advertisers will pay for a podcast spot will vary depending on the length and type of the ad. 60 second advertising spots were the most popular spot length in 2018, with 90 second advertising spots were not far behind, followed by 15 seconds and then 30 seconds, according to an Internet Advertising Bureau study by PwC. It found that host-read ads continue to be the preferred advertising type, representing around two-thirds of ad types in 2018. Announcer-read/pre-produced ads make up most of the other one-third.

“Podcasting offers such an engaged, personalised and unique environment – you really can talk to people on a very individual level.” Liz Duff, Total Media

Duff says that most of her advertising clients prefer to buy pre-roll ads, rather than spot advertising in the middle of a podcast as the latter can feel too intrusive in such a personalized environment.

Despite being an attractive buy for advertisers, there are pitfalls. With so many podcasts and platforms, listeners struggle with discoverability. “There’s just so much of it,” says Duff. “The people who are really going to thrive are the ones with really successful hosting platforms that can bring all the content together and aggregate it. Whoever gets something like the Netflix model of discoverability is going to do well.”

Podcasts can also have a very long shelf life, gaining traction over time, and advertisers have been concerned that their commercials would become out of date quickly around them, says Duff.

Measuring up
The ability to measure accurately the effectiveness of podcast advertising in such a fragmented market is also a concern. “The podcast space is still relatively new and, like other media, continuously evolving, so measuring success should be the focus,” says Jennings. He explains that brands are used to receiving statistics on reach when it comes to radio opportunities, but for podcasts, that information depends on the specific platform. “Podcasting platforms need to show their advantages and value for money to engage the big enterprises.”

Indeed, a lack of clear and equivalent measurement has prevented podcast advertising from truly taking off like its digital media counterparts. To date, podcast advertisers have had to rely on audience surveys or inferences about the podcast’s content to figure out where to allocate their podcast ad budgets.

Meanwhile, advertisers who use podcasts measure success by tracking how many people visited unique URLs, used promo codes, or even talked about an ad on social media. It’s a messy system and not nearly as streamlined or sophisticated as web banner technology.

However, Spotify is starting to use the vast amounts of user data it has to run targeted ads inside its exclusive podcasts.

“In the past five years, podcasts have become a staple of pop culture.” Joel Withrow, Spotify

In January, it announced the launch of new technology called Streaming Ad Insertion, which sees Spotify insert ads into its shows in real-time, based on what it knows about its users, such as where they’re located, their age, gender, and what type of device they use. Spotify already automates dynamic ad insertion on the music side of its business, but this sees it expand the tech into podcasts. Spotify says the shift in consumption from downloads to streaming has opened the door for its advances in data-driven podcast advertising,

Brands that use Spotify’s targeted ads will also receive more detailed data than they would from a typical podcast ad. That includes the number of times listeners heard an ad, as well as anonymised audience insight.

Announcing Streaming Ad Insertion, Joel Withrow, senior product manager of podcast monetization at Spotify said: “In the past five years, podcasts have become a staple of pop culture. In that time, I’ve spoken to a lot of sceptical brands, and the conversation consistently begins and ends with measurement.” He said Spotify’s new technology can  “finally prove out the effectiveness of podcasts with the data and insights that digital advertisers expect.”

Advertisers are taking note of the move. “Clients are definitely asking us about podcasting a lot more” as a result, says Duff.

Jennings says he would recommend advertisers investing into the podcast market, but it’s very much a case by case scenario. “As consumption becomes even more fragmented, podcast advertising will be the key to directly connecting with audiences in an organic and more authentic way - paramount for brands in their quest for continued growth and relevance.”

Moreover – and importantly -  he notes that from a cost perspective, it’s relatively less expensive than a broadcast sponsorship or TV adverts. All the more reason perhaps for advertisers to look a little more closely at the medium.