Digital competition is spurring media consolidation, with Discovery Communication’s proposed $14.6bn acquisition of Scripps Networks Interactive the latest in a series of acquisitions on the demand-side of the media technology industry.

Consolidation is rising - particularly in the US, where the new FCC chairman, Ajit Pai, has adopted a deregulatory approach since he took over the job from Tom Wheeler in January 2017. 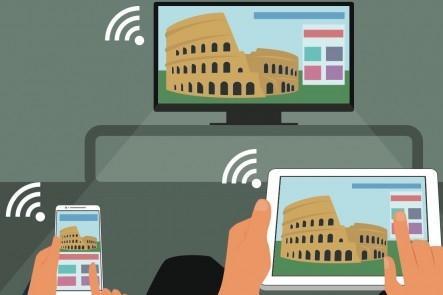 Broadcasting, a heavily regulated industry, needs - from Pai’s perspective - less regulatory barriers to be able to effectively compete with the much less regulated internet industry.

This approach translated into action in April 2017, when the FCC decided to reinstate the “UHF Discount”.

This means that station owners will only have to include half of the coverage area of their UHF stations in the calculation of their national audience shares – the cap is still at 39% at the moment, although this might be lifted later this year. The local broadcast market unsurprisingly welcomed this decision.

The return of the “UHF Discount” triggered a new wave of consolidation in the US free-to-air broadcasting sector. In fact, Sinclair Broadcast Group, which is the largest station owner in the US market, agreed to buy Bonten Media, which owns 14 stations in 8 markets, for $240m shortly after the decision to reinstate the discount. Sinclair also acquired Tribune Media, which is the owner of 42 stations, for $3.9bn.

Local TV in the US is set to experience a softer year in 2017 as 2016 revenues were positively impacted by the US presidential elections.

Local TV groups are trying to deal with declining advertising revenues by buying new stations – to increase their audience share.

Coming back to the Discovery – Scripps deal, this puts together two cable networks – i.e. premium networks deriving revenues from both advertising and licensing fees charged to distributors. 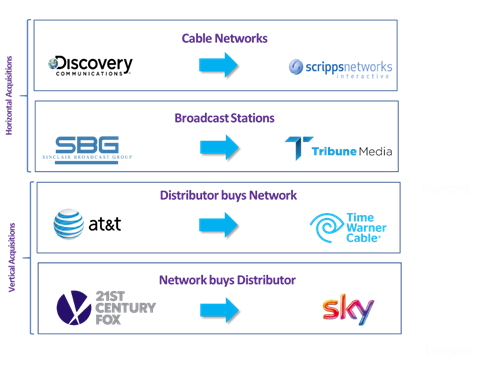 These, along with the deals in the free-to-air broadcasting market, are horizontal acquisitions (pictured right) as they unite competitors that operate in the same sector.

Lately, we have witnessed not only horizontal acquisitions but also vertical ones – i.e. convergence between content and distribution.

A breakdown of the various types of acquisitions is given in figure 1.

There is a common driver in all these horizontal/vertical acquisitions: taking aim at OTT competition. Media companies believe that they are stronger together in the never-ending battle for eyeballs.

With regards to the Discovery – Scripps deal, the two have joined forces exactly because of this. Competition by OTT operators in recent years has contributed to increasing pressure on Pay-TV distributors, which in turn have passed this pressure onto cable networks during fee negotiations. 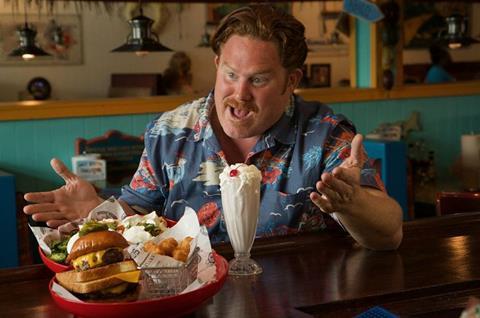 The Knoxville, Tennessee-headquartered company’s international operations include TVN, a Poland-based multi-platform company and UKTV, a joint venture with BBC Worldwide.

By combining forces, the two large networks hope to have more leverage in fee negotiations with distributors and, possibly, launch a direct-to-consumer offering focused on lifestyle/reality content.

Launching a standalone OTT product focused on lifestyle/reality programming is seen as risky by many industry insiders as OTT companies such as Netflix and Amazon already offer this type of content on their platforms.

If Disney were to launch a standalone OTT product featuring ESPN’s live content, this would be considered as a much more promising initiative given its exclusivity.

Disney has indicated that such a product would be marketed at scale – i.e. low price to induce mass adoption.

In 2016, Disney invested $1bn in a 33% stake in BAMTech, an OTT technology company, to support this initiative.

This week, Disney announced that it had agreed to acquire a further 42% of the company, making it the majority shareholder. It also said that an ESPN-branded multi-sport video-streaming service would be released in early 2018, followed by a new Disney-branded direct-to-consumer streaming service in 2019.

All these digital streaming initiatives contribute to making the media and entertainment market much more competitive (and confusing), dragging down the historical profitability levels of this industry.

While there’s no doubt that a standalone digital offering featuring ESPN’s content would be attractive to consumers, there is a great deal of doubt that such offering could sustain ESPN’s current level of profitability – ESPN is Disney’s cash cow, contributing about 43% of its overall operating income, as highlighted by the figure below.

On the supply-side of the industry, increasing consolidation poses a threat to media technology vendors as they are left with a smaller number of customers.

In fact, the synergies gained by TV groups often translate into lower technology sales as a result of sharing arrangements. Also, larger customers are much more likely to ask for larger discounts, particularly if suppliers are crucially dependent on their payments to generate revenues, or make a profit.

A panel of CFOs at the Media Technology Summit at NAB 2017 highlighted the importance of efficiency considerations when evaluating different technology projects.

Sinclair Broadcast’s CFO, Lucy A. Rutishauser, stated that the company tries to migrate all the newly acquired stations to Sinclair’s content management system as soon as possible in order to maximise workflow efficiency across its network.

Moreover, Sinclair CEO and President, Christopher S. Ripley, said of M&A activity in one of the latest earnings calls:

“Economies of scale help us bring improvements to small market stations, including investments in news, other quality local programming, and multicast opportunities.

“Those (local acquisitions), I think, will start in earnest once the local ownership rules get relaxed later this year. And those could be very accretive.

“And I would see that happening either through acquisitions or swaps amongst various players to rationalise the portfolio and take advantage of those types of cost savings that we achieved in market.”

Increasing consolidation on the demand side is therefore set to spur more M&A activity on the supply-side, which remains very fragmented.

Media consolidation is a huge driver of change, both on the demand and on the supply-side of the industry. Media technology buyers are joining forces to gain competitive advantage over rivals.