Broadcaster and journalist Andrew Neil spoke to delegates at the Digital TV Group (DTG) Summit in London where he delivered a stark warning to British broadcasters.

Neil claimed that in the face of increasing competition from subscription video on demand (SVOD) services British broadcasting lacks a successful business model. And with American ownership on the horizon and a state of leadership limbo, he pondered the fate of the British broadcasting industry. 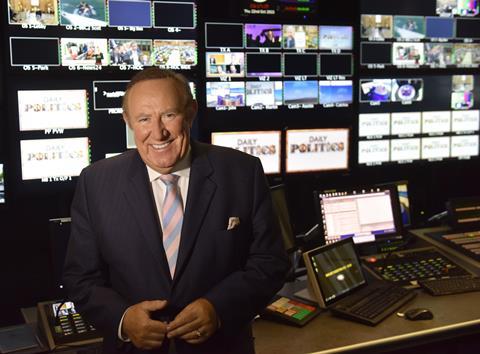 Andrew Neil: ”Broadcasting in this country is at risk from SVOD and insurgents”

“Broadcasting in this country is at risk from SVOD and insurgents at a time when its leadership is in flux and uncertain and the threat and prospect of foreign ownership is widespread,” Neil said.

He said Netflix and Amazon Prime have challenged traditional broadcasters “to up their game”.

He said: ”We live in an age where there has never been as much quantity and as much choice in television and where overall the quality has never been higher.”

He added: “Netflix now has over 1,000 hours of content. It is no longer recycling content made by traditional broadcasters…it now spends $6 billion on original and acquired content. That is more than most TV networks.”

Neil said the figure is three times HBO’s programme budget and at £5 million per episode, Amazon’s The Grand Tour has seven times the budget of BBC’s Top Gear.

Neil pointed to Netflix’s The Crown featuring on the cover of the Radio Times – a magazine which is considered a traditional landmark for the British broadcasting industry – as evidence that ”these kind of insurgents are now becoming part of what we acknowledge as normal broadcasting”.

He said: “I would argue in terms of quality we are now in a golden age, particularly for drama. We now have a cinematic quality of drama in our production values bringing depth, light, shade, character development and nuance; almost everything today’s movies don’t have.” 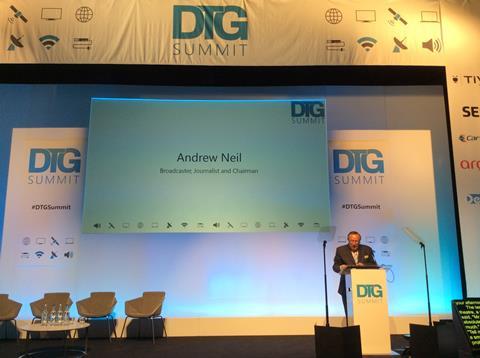 Questions remain as to how British broadcasters can afford to compete with these production values and costs in an era dubbed by Neil as “reinventing the Dickensian novel”, through the ability of television to produce “a quality of character development” and subtleties that even cinema at 90-minutes long finds difficult to achieve.

Competing with the binge

“In the UK, [SVOD] still complements existing pay TV where it’s used as a topping up of programme choices,” Neil said. ”Sky has yet to suffer from major defections of its quite expensive packages…cord cutting is growing in the United States but it is not a thing in the UK; even Amazon Prime says they can co-exist with traditional pay TV,” Neil said.

Americans watch 11% less television in the traditional way than six years ago: as cord cutting accelerates, Neil questions whether this trend will be mirrored in Britain.

He said: “The consequence of that growing sense is that pay television lost 1.7 million subscriptions in 2016, just under 2% of the total. It was the fastest decline on record. Some 80% of those turning away cited price, while 50% replaced their high values cable or satellite subscriptions with SVOD – Netflix, Amazon and Hulu.”

The times are changing

Neil advised broadcasters to follow the “self-cannibalisation” of Sky, which he described as a “very agile and innovative company” which is aware of the potential threats. Meanwhile, the BBC has responded to these changes with the reinvention of the iPlayer, “making it a destination not just for catch-up but to double its reach by 2020”, he said.

Neil’s concerns centre on the lack of public debate and the state of flux the television industry is in, with both ITV and Channel 4 looking for new leadership. He said there is an unprecedented ”upheaval at the top of British broadcasting, where our broadcasters are now facing huge competition and great disruption.”

With Channel 4 referred to as ”just a billion pound business”, Neil said ”the major British broadcasting brands lack the business model to produce the revenues to compete with the global OTT services”.

And while he judged British creativity to be healthier than ever, Neil said ultimately it is the business models that are “peculiarly ill-suited to the technologies that have already arrived and can only get more fierce from insurgents and disruptors. Our business models are weak…at a time where there is a huge churn in the leadership of British television and when government is essentially missing in action when it comes to broadcast policy.