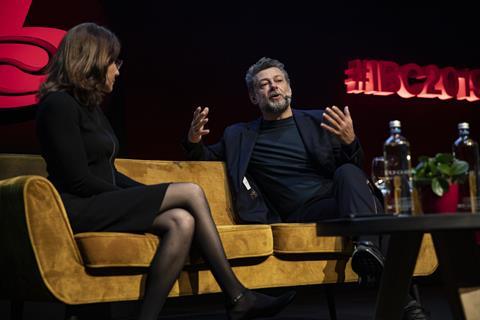 Serkis on Gollum: “I happened to step into a world that was changing and VFX was about to come linked to performances in a way it had not been done before”

Celebrated actor, producer, director and studio head Andy Serkis took to the IBC2019 mainstage this afternoon to share the highlights of his career, the power of motion capture, performance technology and the epiphanies which transformed his craft.

He treated the audience to the origins of conceiving the voice for Gollum and explained whilst he never considered himself as a voice actor he was drawn to the abstract and fantasy of creating something truthful and real.

He said: “I happened to step into a world that was changing and VFX was about to come linked to performances in a way it had not been done before. Up to that point the actors were imaging things that were not there and not effected by that opposing force.”

Serkis is famed for his influence on the art of motion capture in appearances such as Caesar in Planet of the Apes and Supreme Leader Snoke in the new Star Wars films.

However, it was his portrayal of Gollum in Peter Jackson’s Lord of the Rings trilogy where he started his journey with technology to transform the human form and “spawned this desire to push further and further with as many characters as I could.”

Serkis, who is being honoured with IBC’s International Honour for Excellence, described the first time he stood as Gollum in motion capture technology as “mind blowing” when the 3D shaded model brought “all forms of expression together and totally inhabiting something that is completely other.”

It was the beginning of an extraordinary journey where Serkis developed “an intimate relationship using technology” and gained a deeper understanding of motion capture, facial recognition technology and recapturing for advanced production techniques.

He said: “Peter [Jackson] wanted someone there on set that would be manifested as a CG character and wanted someone to play the role opposite actors to evoke a strong and physical reaction.”

Serkis developed the Gollum voice based on the sound of his cat coughing up hairballs, he told the audience to much laughter.

Once the shoot on Lord of the Rings was done, he expected to return to conventional acting, but Jackson had other ideas and proposed casting Serkis in King Kong. Excited and ready for the next challenge, he said: “It was the end of typecasting as we know and it really does mean any actor can play anything using the most incredible 21st century tool for an actor.”

In the years that followed, he co-founded the Imaginarium which is a laboratory-come-studio dedicated to the art and craft of next generation of storytelling, exploring VR, AR and performance capture. 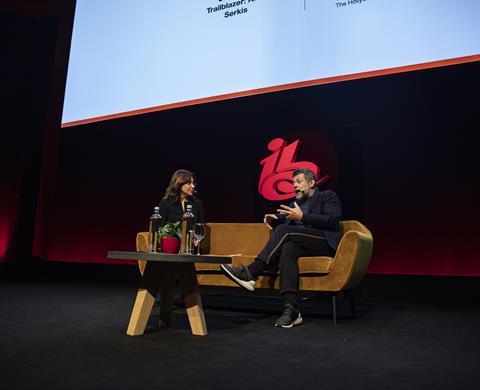 “I wanted to create a sandbox to further the art and craft of performance capture, looking at it in terms of relating to other performers including dancers and lower budget moving as affordable and streamline it without massive back end of post-production and rendering,” he explained.

“We built a company which was creative and driven on the fly, empowering creative characters exploring their potential, we then worked on big budget movies including Godzilla and Avengers.”

Pushing the boundaries with storytelling and characters emotionally engaging with the video world is at the core of the star’s ambitions.

“There is huge potential for creating theatre and mixed reality with digital characters with real actors on stage that had been growing over the years,” pointing to the performance capture work he did on The Grinning Man, as “the most advanced use of technology for motion capture that exists and the product at the end was something we have never seen before.”

Taking technology into the future
He foresees the future of storytelling as immortalising content and characters where the likes of Shakespeare can be reimagined, and theatre plays can be created for a future life. This “might enable an audience to wander around in a performance.”

He added: “What is so incredible is that they can be manifested in countless ways on countless platforms and in 20 years’ time there could be a different vision of the characters.

“It won’t be too long in the future where you can buy the data and design and bring to life a show you are creatively involved with.”

With the Imaginarium Serkis plans to “take this technology into the future,” and deliver “remarkable digital versions” to evolve storytelling that has endless capabilities and creative opportunities.

However, this raises a lot of ethical implications, he acknowledged in the packed session with Hollywood Reporter journalist Carolyn Giardina. Addressing the topic of diversity, disability and opportunities, he said: “I have always maintained the greatest thing about this technology is playing any character regardless of sex, colour, race or gender.

“We are living in an age of diversity and getting closer to films like Irish Man with Robert De Niro using facial performance to capture younger version of himself.

“Diversity is hugely important and is really making its mark in the cinema industry and Black Panther was a big wake up call to everybody. It is time to let disabled actors to be given a chance, the needle has to swing and it also opens up a future where disabled actors can play able bodies people.”