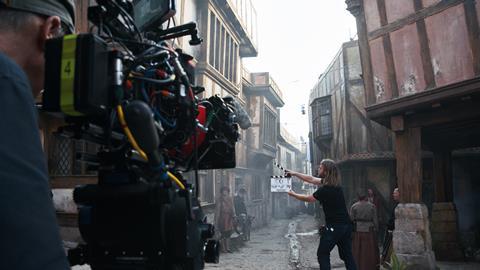 Behind the Scenes: A Discovery of Witches

The second season of Sky’s A Discovery of Witches saw the protagonists escape to an Elizabethan London. Axis Studios explains how it leveraged cloud rendering to create a realistic 16th Century London 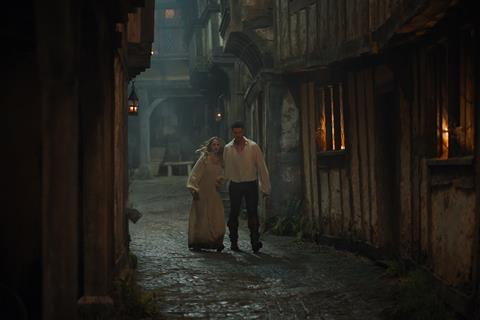 Sky’s A Discovery of Witches sees the return of Teresa Palmer’s witch Diana Bishop and her partner, played by Matthew Goode, transported to 16th Century London as they look to escape from troubles in their own lives.

The first season of the show, which is based on the All Souls Trilogy book trilogy by Deborah Harkness, aired in September 2018, with much of the work for this and season 2 filmed in Wales, on location, and at Pinewood Wales.

For VFX company Axis, which was brought on board by Bad Wolf and Sky Productions, the switch to an older version of London posed a particular challenge: How to recreate a realistic Elizabethan England with limited rendering capacity and a relatively small team.

Compounding some of the challenges was the length of the production, not to mention the interference of the Covid-19 pandemic that delayed productions worldwide.

VFX supervisor, Grant Hewlett explains: “I think one of the biggest challenges on the project is they had a really, really long production ship. It was really drawn out. So, for us, we had to have a much smaller team than we would have liked for a lot longer.”

This lengthy schedule had to run along with other ongoing productions for Axis, which is a multi-award-winning studio which works across both VFX and animation. With offices in London, Glasgow and Bristol, recent credits include HBO’s Catherine the Great, psychological crime drama Luther, and Serengeti.

Recreating a full London cityscape of the past was no small process so the team had to take steps to ensure flexibility and not max out our internal render resource.

“When they came to us in the early stages, we were talking about large scale environments and effects work,” adds Gilbert. “We had the nimbleness to be able to create these large-scale scenes, but they were complex – in one of the render logs we had around 23 trillion triangles.”

Axis was using SideFX’s Houdini to produce the shots, with much of the creative layout work done with the MASH plugin within Maya, from Autodesk, Arnold, also from Autodesk, featured as well. 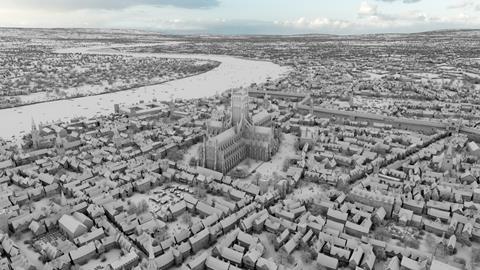 The task, then, was how to create a realistic London in which the two leads – a witch and a vampire – could realistically explore, without losing the scale and grandeur of the Elizabethan capital.

To do this, the team had to “Google like crazy” adds Axis Studios CG Supervisor Ross Gilbert. Much of the referencing was taken from the diaries of British administrator and member of parliament Samuel Pepys, whose records remain a key primary source of the English Restoration period.

“Map-making wasn’t amazingly good or accurate for that period, especially on a small scale,” explains Gilbert. “A lot of what I found was supposed to have been reconstructed from journals, basically people mentioning various streets and how they relate to one another. From that, we could see what kinds of life you would find in those streets.”

To make it easier, they split what London now calls boroughs into various wards in order to build out the wider city.

“There’s a huge number of lessons that we learned along the way. In terms of refining the process, it was quite astounding the reduction in costs that we could get, just by going through all of those iterations.” Matt Hooker, Axis Studios Pipeline and R&D Department Manager

“The idea at the beginning was that they would have different kind of characteristics - one would be noticeably richer with cleaner roof tiles, and the other one may be much dingier buildings, with narrow alleys. We found a really, useful website called Layers of London (www.layersoflondon.org) which allowed us to overlay geo-referencing. This takes the best map of London that they had occurring where exactly it is, and you have a very high-resolution image of it. And those parts were geo referenced against Google Maps.”

With this, the team were able to create a slider to dial in modern London compared with the older render of the city, and, where relevant, mix the two, allowing Axis to map main roads and create the core structure of Elizabethan London.

These were used for street extensions and aerial shots of the city, tied into the set which was built in Wales, and the switch in Discovery is seamless, with a lifelike London playing almost as its own character in the drama.

Magic of the cloud
“Our on-premises compute capacity is not insignificant. We’ve been able to handle a number of shows simultaneously and turn over shots quickly, but we found ourselves continually running at full pelt, which led us to AWS,” noted Jamie Murray, Axis Studios Pipeline TD.

In order to boost render capacity, Axis turned to Amazon Web Services’ public cloud offering, meaning the firm could increase or decrease render capacity as needed, as well as utilising other AWS functionality on an on-demand basis. 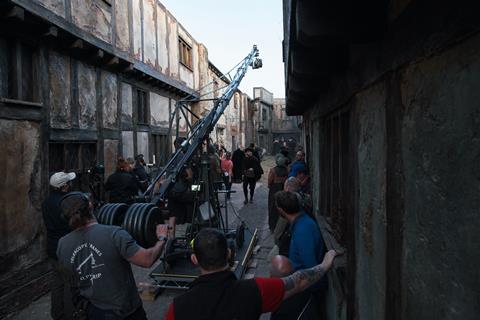 AWS: Axis turned to the cloud to decrease or increase render capacity as needed

“We knew we would get to a point where we would hit our render capacity, and we turned to the cloud to get us through those unusual peaks,” adds Matt Hooker, Axis Studios Pipeline and R&D Department Manager. “The AWS team was very hands on in getting us up and running, and helped us navigate areas of uncertainty. Now that we’re integrated with AWS, we’ve changed the way we think about rendering and can take on projects that would have otherwise proven challenging.”

Axis Studios has been experimenting with cloud-based resources for a few years, leveraging AWS Portal in Deadline, the render management tool developed by AWS Thinkbox that the studio uses to manage compute resources across Glasgow, Bristol, and on AWS. Requiring a more robust deployment, Hooker and his team began looking at integrating the AWS public cloud more deeply at the start of 2019. By the end of the year, the setup was production-ready, which ended up being fortunate timing. “We had a very high-profile project come through late last year requiring photoreal, FX-heavy work on an ambitious timeline,” Hooker adds. “It was a great opportunity to use AWS and ended up as a big success. We really benefited from the power of the cloud, and the AWS team was hugely helpful.”

The team tapped a range of instance types, including Amazon Elastic Compute Cloud (EC2) Spot Instances for low-cost rendering, and on-demand instances for other tasks.

Hooker explains: “You generally have spikes where you might have a few machines drop off. And our system would automatically spin up some new machines, once they’re available, and could pick up the renders exactly where they left off. So not just picking up frame again, but picking up the specific part of the frame that was rendering. That was key for us.”

At the peak of production, Axis Studios scaled resources to 2.4x its on-premises capacity with AWS. Using Deadline, the studio transferred jobs from the artists to the cloud, where files were inspected and pushed across Axis Studios’ VPN to Amazon FSx. Once the transfer finished, the render job went live, spinning up a Spot fleet. When complete, Deadline returned the frames to the artist and the Spot fleet spun down.

A discovery of lessons
So, what were the key lessons learned from the adoption of cloud infrastructure into Axis’ workflow?

Hewlett says that others looking to follow the firm down this path will “need to do a lot of iteration” on processes, in order to estimate costs. “Don’t take that first prototype you use as the gold standard in how much it is going to cost.

“There’s a huge number of lessons that we learned along the way. In terms of refining the process, it was quite astounding the reduction in costs that we could get, just by going through all of those iterations.”

Hooker also suggests pulling in real-world scenarios to test the technology, because “you can run as many tests scenes as you like. But as soon as you get into production, artists will throw you something unexpected which will unearth a whole lot of new things that you need to think about in terms of how your pipeline works.”