Isolation Stories: How to shoot a drama during lockdown

Coronavirus lockdown has put a halt to productions worldwide. But with Isolation Stories ITV Studios has created a novel drama shoot where the cast and crew maintained social distancing. Adrian Pennington investigates. 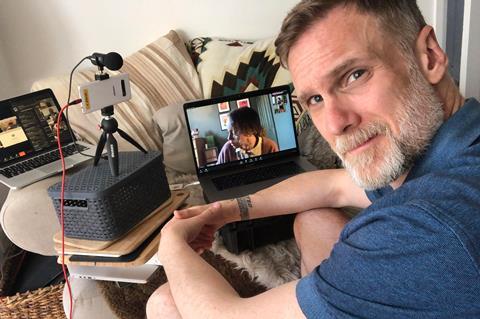 Turns out you can make a drama out of a crisis. ITV Studios’ Isolation Stories went from inception to transmission in barely a month without any member of the production — with the exception of the cast — going anywhere near one another.

The four mini-dramas are the brainchild of screen writer and producer Jeff Pope (Philomena, Stan & Ollie) who realised, as his family underwent their own Covid-19 scare, that TV could almost uniquely hold up a mirror and reflect people’s universal experience under lockdown.

“There is a lot of wonderful work being done by current affairs and entertainment programmes, but because of the long lead times required to prepare and shoot, scripted dramas are never normally this reactive,” says Pope. “If we were to get on air quickly, the other big obstacle was the isolation process itself. We obviously had to find a way of filming these stories and not breaking the rules and putting people’s health at risk.”

The solution was to approach this from the angle of short stories, each taking a different slant on what is happening, and to film in the homes of the lead actors.

From being approached to work on the project, to learning a fifteen-page dialogue-heavy script and shooting it, the actor’s involvement was just seven days.

Pope’s first thought was to ask the actors to shoot it themselves on their own phones. Then the idea grew to finding a way to shoot with the look and feel of professional drama but without any contact that would break social distancing rules.

“There is a lot of wonderful work being done by current affairs and entertainment programmes, but because of the long lead times required to prepare and shoot, scripted dramas are never normally this reactive,”

Family affair
That necessitated the participation of the actor’s families to do everything from operating cameras to decorating the set.

For example, actor Eddie Marsan’s wife Janine is a make-up artist and had to sort the props and camera for their drama Karen, in which a divorced man ends up looking after his two sons in lockdown.

Sanitised camera equipment was delivered to the homes of the cast, and then, from a safe distance a technician gave each family a basic lesson in how to operate it. 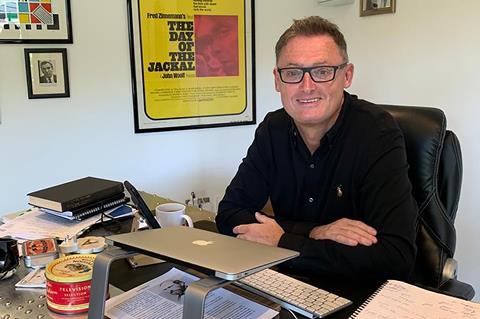 Jeff Pope: Isolation Stories was the brainchild of the award-winning producer and scriptwriter

“The actors just had to turn them off and on and put them on a stand although as they got more confident they were able to do more with them,” says Len Gowing, DoP on Karen.

Each of the filming units was assigned a production team including director, DoP, first assistant director, remote camera operator, technical and sound supervisor. They were able to communicate with the families and each other on Zoom, providing advice on how to set up the shots, adjust the lighting, arrange props and so on.

“My wife Celia liaised with Louise (Hooper, director) and Jamie (Cairney, DoP) who would tell her where to position the camera or whether a light needed moving,” explains actor Robert Glennister. “It felt like everyone was in the room as they normally would be without them actually being there.”

Workflow crash course
The fourth of the dramas to go into production was Karen, directed by David Blair starring Marsan and his real-life sons, along with David Threlfall and Leanne Best.

“Discussion went from a couple of glasses of wine on a Saturday night to 8am Sunday morning and full on production,” says Gowing. “Although I was across how things worked, we needed to invent a way of turning the wheel.”

For Gowing, the Monday was a day of research, during which he requested plans of the Marsan house to construct a 3D miniature model to begin devising camera angles.

“Everything was guesswork and judgement at this stage. I didn’t talk to David [Blair] until the Tuesday, which was our test day. Wednesday, we went into production.” 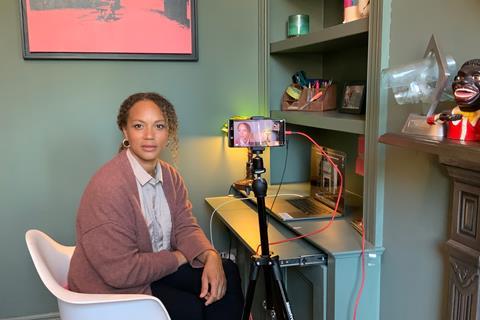 Mike and Rochelle: Focuses on the Zoom web app used to stay in touch

While the kit was standard, each episode’s team devised different workflows. For instance, the storyline for Mike and Rochelle was oriented more around the Zoom web app while ‘Karen’ required an approach more in keeping with a traditional single camera drama.

Geographically the Karen team was split all over the UK. The Marsan’s are in London, Blair in Dumfries & Galloway, first assistant Amanda Neal in South Manchester, producer Ken Horn in Warrington and Gowing in Liverpool. London-based sound recordist Russell Jeffery attended the shoot, located at all times outside the property.

From the house’s ground plans Gowing understood which direction to the sun that key rooms faced. Combined with the weather forecast he was able to prep shots.

Remote camera control
“I ordered a sheet of poly board which Jeffery moved throughout the day outside the window so it reflected the sun and gave us a nice wash into the kitchen.”

This threw up its own problems. Shooting back toward the window with blazing sun outside and little control over interior lighting left the image liable to over exposure.

“With the mobile phone you control exposure by shutter speed. If I set it to expose for the brightness outside at 1/400th of a second the inside would be really dark. Set at 100th of a second and the outside would be blown out. It was a judgement call about what was best to record now and what you could fix later.”

Each DoP was able to remotely access and adjust the phone’s image settings using the pre-installed FiLMiC Pro app.

“This app essentially mimic’s the controls of a mainstream camera including focus, exposure, white balance and speed but over WiFi this inevitably added a couple of seconds delay.

“More of a problem was that mobile phones inherently don’t support locked frame rates. There’s no such thing as standard 24 or 30fps, it shoots variable rates all the time. We were getting 30fps and 24.7fps in consecutive takes without rhyme or reason. Five frames can make quite a big difference. We discovered this pretty quickly and realised that the only way around this was to smooth the frame rate in post.”

The varying frame rate was compounded by having to use domestic broadband. “We couldn’t have somebody in the house managing rushes so the solution was to upload everything by broadband to Google Drive from which our editors would access the material.

“One thing we didn’t factor was that if you shoot a minute’s take and the file size is one Gigabit then once you start to upload over local bandwidth of, say, 17Mbps, everything gets clogged up very quickly. With multiple 1Gb files uploading really slowly to the server it was next to impossible for the editors to work.” 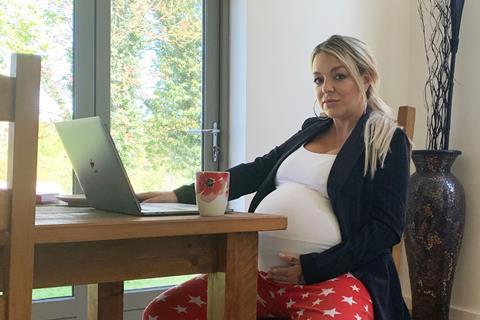 Sheridan Smith: Who stars as ‘Mel’ had her fiance to help with filming

Proxy file workflow
Gowing realised that he could create proxy files within the phone which would reduce the 1Gb file size to 60Mb. This process took 2-3 minutes but could be uploaded to the production team while recording the next take.

This proxy workflow took a bit of getting used to but it did enable the editors to catch up. Meanwhile the hi-res version was sent sequentially in the background to Google Drive freeing up bandwidth needed to control the camera.”

Each S10 had about 128Gb storage on media cards. The production for ‘Karen’ used two S10s rotated so that while one was shooting, the other was uploading.

Audio was recorded from radio lapel mics attached to the actors with timecode matched to the image files using DigiSlate (digital clapperboard) or sometimes the old-fashioned way by Jeffery clapping his hands.

Gowing took the EDL from the edit and conformed rushes from the high resolution material on Google Drive to give Encore colorist Paul Staples notes on any desired fixes.

“In terms of discussion we would talk with the actors and their families by Zoom,” Gowing explains. “We’d maintain the normal set protocol so the director had priority with his instruction to the actors, after which we would ask if they wouldn’t mind doing us a favour and move a light here or there.”

They also opened separate line of communication just for crew using the Unity phone app “like a walkie talkie” for offline discussions.

“If you have a dozen people on Zoom the chat can get very messy because you end up talking over one another.”

Gowing arranged for the Marsan’s to place a second laptop behind the camera so that the production could see a live streamed view of the set via Zoom.

Using screen sharing app ISL Light, technical operator Scott Hebden was able to integrate playback with the Zoom app so that everyone could share input.

Once the proxy workflow was in place a review of a take would take 3-minutes to transcode, upload and view.

Threlfall’s scenes were all shot from inside the house (while the actor stayed outside) with instructions relayed to him by the sound recordist.

Magic happens
The shoot days may have been shorter than normal but Gowing found it far more exhausting. “Every element of my thought process had to be verbalised to people who wouldn’t necessarily understand the technical basics.”

“My kids have grown up on film sets, so this project will give them a greater appreciation of the amount of work that goes into making a film and the skill and dedication of the crew,” Marsan says. “Janine was holding the camera and setting up the lights as well as making sure our four children were all doing their school work online.”

Marsan’s daughter made some behind the scenes filming for a documentary about the making of the series which will air on ITV this Thursday.

“One of the joys of filmmaking and something I wanted my children to experience, is the joy of collaboration and facing, what seem to be insurmountable problems together. If you all work together and persevere, eventually something magical happens.”