Behind the Scenes: Nomadland 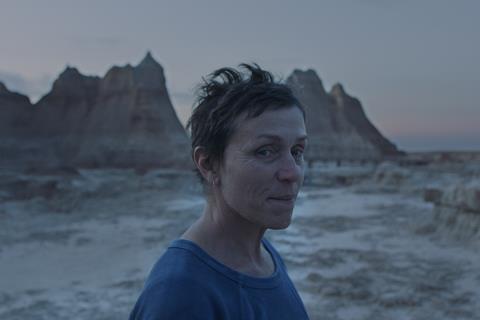 Nomadland: One of the leading awards prospects of 2020

A docudrama about a group of drifters on the margins of American society has become one of the leading awards prospects of 2020. Acclaimed at festivals from Venice to Toronto, Nomadland was inspired by Jessica Bruder’s 2017 nonfiction book and documents a transient community of mostly middle-aged people living out of cars and vans in parks and campsites across the midwestern U.S.

Writer-director-editor Chloé Zhao’s naturalistic approach embraces many of the lives of these people and a script that evolved as she met them.

“I am not a documentary maker,” Zhao says of her filmmaking philosophy.  “I think [documentary makers] are so incredibly brave to get know a subject as if what [they] are filming is what is real. I don’t know how to do that. [But] I think audiences want authenticity in their viewing experience and I find that having authenticity in fictional filmmaking really helps to keep their attention.”

She first adopted the approach in her debut feature, Songs My Brother Taught Me and 2017’s The Rider which were both filmed on the Pine Ridge reservation in North Dakota with a cast of non-actors by British DP Joshua James Richards.

Nomadland was brought to Zhao as a project by her friend, the actor Frances McDormand, who also plays Fern, the film’s central character through whom we meet the nomad community. Fern has to abandon her home after losing her job. She journeys from Nevada to California via the Badlands of Nebraska taking seasonal minimum wage jobs along the way. 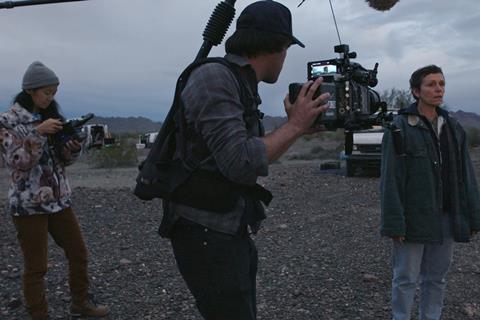 Chloé Zhao: “I don’t rehearse either. As soon as the idea for the scene is green lit in my head we go and shoot it.”

“The point of the road movie is not to get from A to B,” she says. “If [Nomadland’s characters] had a goal to work toward maybe their lives would be easier, but this meandering is when loneliness kicks in and you have to get to know yourself because you are not hurrying to go buy a house or chasing a bill.”

Little visual details tell us as much about the characters as anything they do or say. “Early on [we show how Fern] decorates her van,” says Zhao. “What she chooses to bring with her says so much about who she is because space is so limited. It’s the art of editing down.”

The verité style is shot handheld on Alexa Mini by Richards. “Something people need to understand about Chloé Zhao is that she is a really conceptual filmmaker,” the DP says. “She comes at things looking at how she can tell the story in a new and innovative way.

“It’s a shame that because of identity politics most of the questions put to her are about being a Chinese woman making movies,” he adds. “It would be great from a filmmaking point of view if we can past that and ask what’s it like to be challenging the way people make films in America. That is so much more exciting and progressive to think about because that is how Chloe approaches every project.”

Embedded experience
Zhao, Richards and a skeleton crew lived among the communities while filming, adapting the script to the personalities of the people they met. Directing assistant Hannah Peterson had previous experience of working with non-actors on The Florida Project, a film about living on the breadline in the shadow of Disney World.

“When Hannah was out there on location taking pictures and filming iPhone footage of drifters talking, Derek [Enders] caught my eye,” Zhao says. “There is something in the way he speaks you just know you want that to be recorded. It’s a feeling.”

Zhao: ‘I think audiences want authenticity in their viewing experience’

She continues, “In my script I had wanted Fern to meet someone who is young, someone to make her think about the child she never had, or someone similar to her husband or who would remind her of when she was young. We had originally scripted [this] to be a pregnant woman but we couldn’t find anybody that I was drawn to.”

Zhao listened to Derek telling his personal history until she found a moment that she felt would work for Nomadland. “I would stop him and ask if he could say it again, but in a different way, that I know is going to fit into the story. That happens quite a bit in the film. Based on little moments like these I’ll then turn around to Fran and ask her to hurry over and together we work out what lines in the script I need her to say and that I can use in that moment acting opposite Derek, or the other characters. To work that way you need to have a cast and a crew [willing] to put up with your madness.”

She adds, “I don’t rehearse either. As soon as the idea for the scene is green lit in my head we go and shoot it.” 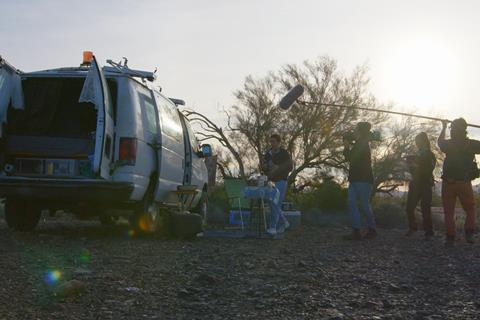 Travelling spirit
Zhao says the story resonated with her own nomadic upbringing. Born in Beijing, an only child, Zhao attended boarding school in London, then high school in Los Angeles. Having moved to America, she spent a lot of time in the national parks and camp sites of its heartlands.

“Those experiences shaped me as a filmmaker,” she says. “I wouldn’t be making the kind of films I do if I hadn’t travelled those roads.”

Her early influences were Japanese graphic novels. Indeed, she named her own van in which she lived on the road during the making of Nomadland, ‘Akira’, after the Manga classic.

“Growing up I always wanted to be a Manga artist. I devoured Manga,” she says. “If you think about it, Manga is storytelling in edited storyboards. In Manga the storytelling is quite extreme at times in the way the story jumps from one image to the next. So, at a very young age that is how I see story.”

You can see that in editing style of Nomadland as the story jumps forward in time and place.

Hong Kong director Wong Kar-Wai was another inspiration. His romantic and evocative films like Chungking Express and Happy Together are also characterised by nonlinear narratives and vivid cinematography. They screened Happy Together for cast and crew during the making of Nomadland.

“If I look back and ask why I make films the way I do, it comes from those two combinations,” she says.

The film’s most impassioned speech is by Bob Wells, a leader among RV lifestyles. He talks about people like him being used as “workhorses” by the state before being “put out to pasture” because the social benefits are not enough.  A later speech shows Wells talking about the loss of his son.

Zhao: ‘The point of the road movie is not to get from A to B’

“Bob has that conviction and I think he should say it but I also asked if he had anything that was more universally understood [hence the personal revelation]. I try to make a balance.”

Although set in 2011, arguably the politics of these desert outcasts and the system which generated them has never been as acute. Yet Zhao doesn’t show us anyone wearing a MAGA hat; there are no election posters; the current politic situation is not mentioned. Fran takes temporary work at a massive Amazon warehouse and lives out of the van at an RV park seemingly subsidised by Amazon. Zhao films inside the warehouse and includes some of its genuine workers as supporting actors. But big business is not demonised.

“I think it’s a conscious decision to stay somewhat neutral because I rather would have one person who disagrees with my politics watch my film and maybe just change how they feel a little bit than a whole room full of people who already agree giving me a standing ovation,” she says. “I’m not trying to preach to the choir. You can guess where I stand politically but I don’t need to make films to appeal to my peers. I want to make films that can bring my peers and those who would disagree with my peers together. So not going too specific on politics is trying not to alienate those who I really want this film, to wake [them]up or even just see themselves in it and realise that this is their situation too.” 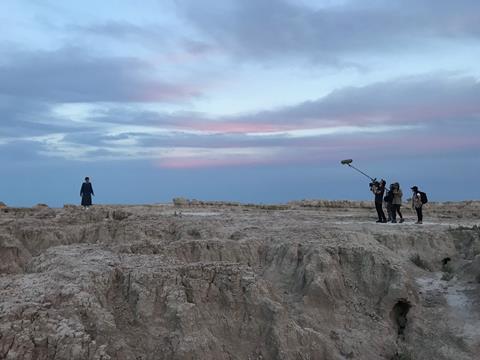 Zhao, Richards and a skeleton crew lived among the communities while filming, adapting the script to the personalities of the people they met.

Cornish context
Richards grew up in Penzance and from the age of 16 decided he would go to New York film school (“I just had it stuck in my mind as the place to go,” he says). He did a creative writing programme at Bournemouth Media School (“I didn’t really show up to be honest, I was down the beach drinking”) but managed to get selected for NYC Film Academy. Here he met Zhao, who was a few years above him.

“She was the kind of person I hoped to meet at film school,” he says. “Someone who wasn’t like anyone I’d met before, from a different part of the world, who was making a film in the heartlands of America on an Indian reservation. I was a long way from Penzance.”

The Eternals, though, is photographed by regular Marvel cinematographer Ben Davis BSC. Richards isn’t unhappy. “I want to carry on down this rabbit hole of choosing projects because it’s something I want as to experience as a human being,” he says. “I am not down on bigger conventional shoots or even studio things but it’s not necessarily an experience I want. I am looking for new life experiences or to generate some of my own content if it doesn’t come my way.”