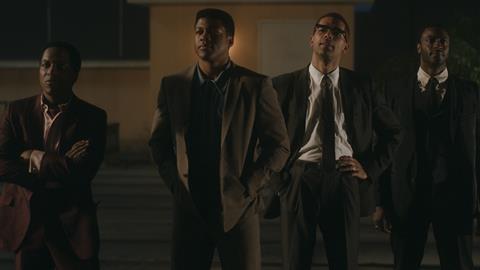 Behind the Scenes: One Night In Miami 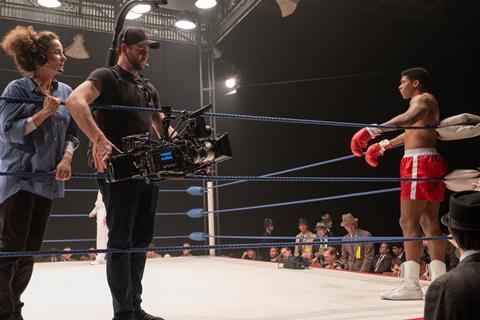 Behind the scenes: One Night in Miami

Adapted from his own award-winning play by Kemp Powers and directed by Regina King, One Night In Miami is a fictional account inspired by the night these four formidable figures spent together. Their conversations relate to racial injustice and religion, questioning what the personal responsibilities of an artist of colour should be, if a Black athlete can just be an athlete, and asks whether BAME artists should embrace, or stay away from, activism.

“I had seen the play at the Donmar in London a few years ago and loved it but I was concerned that because it is so theatrical it would be a bit too stagey for a movie,” says editor Tariq Anwar. “My agent sent me the script out of the blue. I discussed the approach with Regina and really thought it was worth doing.”

King won a Golden Globe and an Oscar as best supporting actress for If Beale Street Could Talk and has previously been behind the camera on TV shows including TNT’s Animal Kingdom and ABC’s The Good Doctor but this was her debut feature as director.

British editor Anwar spent 18 years at the BBC honing his craft on programmes as diverse as Last of the Summer Wine and Bergerac before moving to features, notably on American Beauty and The King’s Speech for which he was Oscar and BAFTA nominated. He also cut The Madness of King George and The Lady in the Van, both stage plays adapted for screen.

“With action and music sequences it is easier to maintain a visual interest than with dialogue no matter how well it’s written and performed,” he says. “It’s important to keep the audience stimulated by the choice and variety of shot and rhythm changes. At the same time, you don’t want the audience to be aware of the editing. There is always a danger with making scenes too choppy in an attempt to energise them, particularly when exchanges become heated which they do several times in the film.” 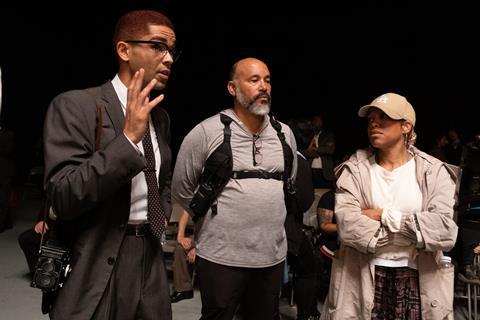 One Night in Miami largely takes place in the confines of a nondescript motel room, although the screenplay opens out locations including a rooftop, a visit to an all-night store and recreations of Clay’s boxing bouts with Henry Cooper and Liston. It’s a masterclass in how to articulate a fluent and engaging drama which is heavy on politics and light on scene changes.

“The important thing is having enough coverage,” Anwar says. “If a director doesn’t cover something well you have a problem. You are limited in what you can do. By having a variety of shots to go to you can always keep it interesting. There’s nothing you can do if a film is shot in a very stagey way and the actors or cameras don’t move around.”

King and cinematographer Tami Reiker ASC (The Old Guard) shot with two large format Alexa 65 cameras, moving them on jib arms. That allowed the operators to keep the cameras floating and to better follow the actors around the room. She recorded at 6K for the image quality but softened the look with Prime DNA lenses.

“Much of the editing is dictated in terms of the rhythm by the actors,” Anwar says. “So, in a way I am following the way they perform, in the edit. At times you need to make a longer pause or speed up the action or overlap the dialogue. Some scenes as scripted didn’t work and needed either deleting or a bit of re-imagining, not unusual for any film, but as always doing this without damaging the integrity of the script and the performances. All these are generally left to the editor; they are not micromanaged by the director.”

Miami Blues
Set in Miami but filmed in New Orleans, Reiker and production designer Barry Robinson created a colour palette of vibrant blues and glowing warm tones in keeping with archival photographs of Clay/Ali fights by Howard Bingham and Neil Leifer and the street photography of Saul Leiter and Gary Winogrand. Anwar was installed in cutting rooms in New Orleans, posting scenes for King’s review on Frame.io and speaking frequently on the phone.

“It can be very confusing filming in such a cramped space [as the motel room set], to get the angles all wrong or the eye lines wrong, or just to mess up the whole thing,” he says. “Regina and Tami did a brilliant job by giving me a number of choices to keep the audience interested by giving them a different point of view and to make to make it visually more engaging.” 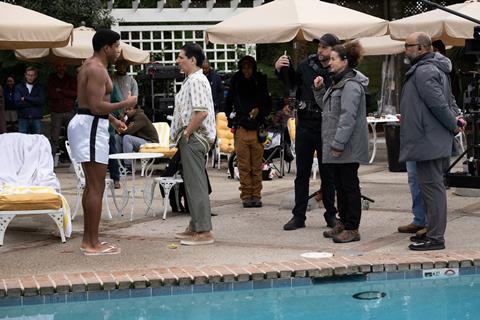 Tariq Anwar: ‘‘By having a variety of shots to go to you can always keep it interesting’

The characters volley barbs back and forth about their personal experiences as high-profile Black men against the backdrop of overt and casual racism and growing civil unrest. For Malcolm X the choice is clear, but the others exhibit more nuanced and equally persuasive arguments for their stance. All of them are at a crossroads too. Cooke for example is depicted wrestling with writing a Bob Dylan-style revolution song; Brown is shown in his first movie role (he would subsequently star in The Dirty Dozen, Ice Station Zebra and Mars Attacks).

It’s also a very masculine portrait but there’s vulnerability on display too even from the brash champ who is on the verge of announcing his conversion to Islam and his name change to Muhammad Ali.

“I stumbled across the idea while reading a book about the intersection of sports and the civil rights movement,” explains Powers in the film’s production notes. “It mentioned that following his first defeat of Sonny Liston, Cassius Clay went back to the Hampton House Hotel in Overtown, Florida near Miami where he spent a quiet evening in conversation with friends Malcolm X, Sam Cooke, and Jim Brown. This was just a little paragraph in a book that kind of blew my mind at the time. After all, these were four of my heroes.

The riffs of the quartet’s friendship and frustrations are underscored with a delicate blues piano score which Anwar inspired.

“With all films I like to use music at a very early stage. I feel it helps me with the picture cutting. Some directors find it abhorrent to put music on since they don’t want to be influenced or manipulated by someone’s music choice, which I understand. Regina expressed her concerns about the over-use of score, however she was very open to making my first assembly with music.

“The first sequence I put to music was a prayer sequence with Clay and Malcolm X and initially I put on a gospel jazz piano and then went back to the duduk (an Armenian wind instrument). I was torn between the two. Regina thought the gospel was wrong considering Malcolm’s devotion to Islam, so we stayed with the duduk but I went back to the piano for the opening boxing fight. I felt this had a kind of playful feel to it for Clay’s character. Once I felt that worked, I stuck with the blues piano for all the characters trying to vary them slightly. With Malcom X we tried to have a gospel feel, with Brown it is more introspective and with Sam Cooke it’s fun-loving.”

Lockdown locations
Principal photography completed in February and COVID-19 nearly derailed the scene in which Ali and Cooke drive to a late night store. They filmed it under lockdown conditions but this presented some editing challenges for Anwar and his assistant Naomi Filoramo.

“Following the shoot we worked together on refining the edit: swapping out takes, transposing scenes, shortening/deleting scenes, re-instating scenes, playing with music,” he says. “Just a few weeks short of finishing the ‘director’s cut’, COVID stepped in. From then on, both Naomi and I worked remotely, having editing gear installed in our homes. I relocated to LA and we continued to use the internet to exchange material (visual effects and music sketches from Blanchard) and post edited revisions to Regina and the producers. I used FaceTime and WhatsApp to show her scenes. I was surprised at how easy the transition to remote working was.”

One Night In Miami is released by Amazon in January 2021.