In a world first, BT Sport and EE will use 5G remote production to broadcast the EE Wembley Cup on Sunday to showcase the next generation technology. 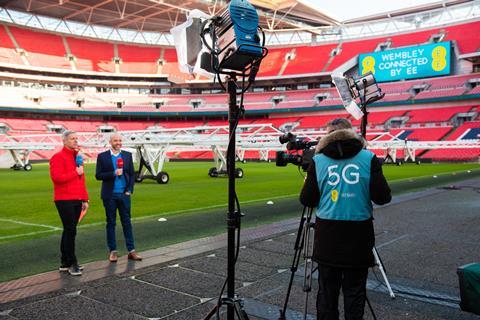 BT Sport and EE conducted what is claimed to be the world’s first live sport 5G-enabled remote production yesterday in a two-way broadcast between Wembley Stadium in west London and the Excel exhibition centre in east London.

The EE network was used to carry the broadcast to the BT Sport production hub in Stratford where the crew remotely produced the trial broadcast delivered over the 5G network.

The final of the Football Association (FA) tournament, featuring YouTube’s biggest footballers alongside international football legends is set to be the first live broadcast that will demonstrate the capabilities, speed and promise of 5G-enabled broadcasting.

Using EE’s 5G network from Wembley the match will be captured and delivered live on YouTuber Spencer FC’s channel on Sunday at 14:00.

Leading the charge
BT Sport Chief Operating Officer Jamie Hindhaugh told press: “This goes back to the BT Sport concept of editorial innovation and our aim to take our customers to the heart of sport using technology. 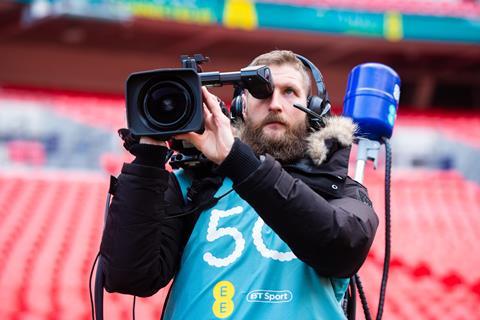 According to Hindhaugh 5G will allow BT Sport to deliver advanced remote production and to cover more live matches and competitions.

He said: “5G drives efficiencies to enhance content, engage producers and enhance picture quality so the audience can be more immersed.

”The test network uses EE’s 3.4GHz spectrum from its first 5G antenna in the stadium, connected to a 10Gbps backhaul link.”

Filming on location with wireless cameras offers freedom of creativity and the possibility to overlay augmented reality (AR) experiences for audiences in the future.

Hindhaugh said: “We don’t just do these things because they are fun, we do them because they improve our production.”

In fact, it was the last resort, explained BT Sport Director of Mobile Strategy Matt Stagg, who took up the role earlier this year moving from EE.

He said: “We wanted to do this with 4G and look at the possibilities but it was not viable.”

The developments in 5G being appropriately suited to broadcasting and making sports broadcasting ideal as the trial and demonstration ahead of wider deployment in 2019.

Stagg said: “What we can do with 5G will allow us to use a technology called network slicing that enables you to segment parts of the network off for different vertical industries.

”Broadcasting is a perfect use-case and it allows us to create a broadcast grade network exactly as it would be for fibre or satellite.”

Network slicing guarantees broadcasters a minimum standard of speed and throughput with 100 megabytes per second lower latency. As a result, outside broadcasting will become far more efficient.

He said: ”5G will allow someone in the back of a car or a motorbike to produce high-quality content without a satellite; the challenges we have had with 4G broadcasting will be resolved with 5G.”

BT Sport Chief Engineer Andy Beale added the opportunity 5G allows broadcasters to “pay for what you need” with agile specifications that don’t exist with 4G.

Beale said the technology requires further development, with manufacturer Huawei predicting the miniaturisation of its dongle used in capturing the 5G-enabled broadcast to take 12 to 18 months.

“Within a year we will see 5G commercialised and cellular products rolling out,” Beale added. 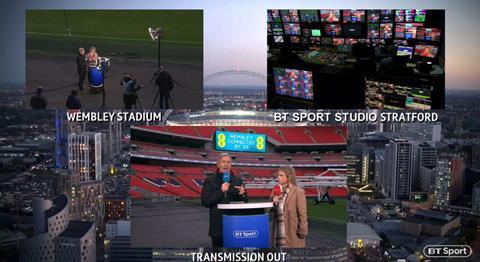 EE announced last week its plans to roll out 5G across 16 major cities in the UK throughout 2019, which promises enhanced mobile broadband, fixed wireless access and believed to be the best use-case for 5G.

As the lead partner of Wembley Stadium, EE has ambitions to make the stadium the most connected stadium in the world. It has introduced several technological advancements including network upgrades with 5G so fans can stay connected.

BT Consumer Business Chief Executive Marc Allera said: ”This trial is another showcase of what our 5G network can do, and is a big part of our continued investment in using 5G across the whole of BT Group.

”The EE Wembley Cup Final 2018 will be the world’s first live sporting event to be broadcast over 5G, and that’s part of our ongoing commitment to innovation for our customers.”