Metadata: The quest to enrich content discovery and usage

As the need to optimise the use of new and archived content intensifies, so does the requirement for “deeper and richer” metadata geared towards the requirements of individual content creators and services, writes David Davies. 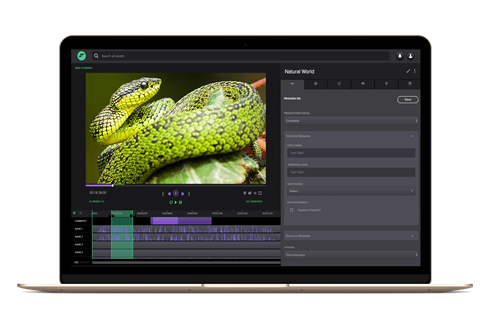 Ooyala Flex Media Platform: Focuses on the management, curation and montisation of content

‘It’s all about the metadata’ declared the Research Data Alliance ahead of a 2019 meeting, and if you have been engaged with the cutting edge of broadcast over the last half-decade there is a good chance that you will have arrived at the same conclusion. As the volume and diversity of content has increased, so has the need for metadata that facilitates effective management, movement, control and monetisation of broadcast media.

Of the five kinds of metadata identified by the US National Institute of Standards and Technology, it is descriptive metadata – by which users can locate content by the use of elements including title, description and keywords – that remains the most familiar. But as the complexity of linear and non-linear broadcast operations has grown, the four other types of metadata have assumed greater importance: structural metadata, whereby the movement of media and interaction between applications and databases can be controlled; administrative data; rights management metadata; and library and preservation metadata.

With the demand for more timeline-based information also adding to the workload, the effective marshalling of metadata has become more cost- and labour-intensive. For many broadcasters this has led to an increased reliance on managed service providers that can deliver a holistic approach to all metadata.

Ariel Nishri is vice-president of product development at satellite and terrestrial telecommunications network provider SES. “Today’s content owners, broadcasters and other content providers are delivering video to a wide range of OTT and social media platforms,” he remarks. “As a result, the amount of metadata and complexity has increased significantly. Each platform has its own bespoke requirements with regards to formatting metadata and images. It’s become a very complex process requiring an increase in manual labour and the use of more expensive tools.” 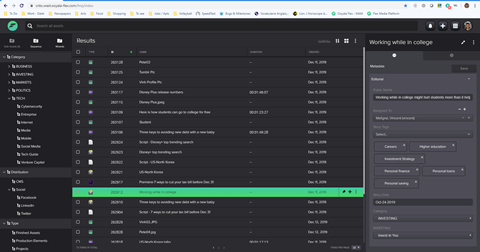 Ooyala Flex Media Platform: All metadata can be viewed in a common structure

Flexible platform philosophy
According to Matthew Carter – head of sales UK, Benelux and South Africa at Dalet – “metadata and the part it plays in a media workflow is as important as the content itself these days.” He confirms that Dalet’s approach to metadata has “continued to evolve” since the company’s acquisition of the Ooyala Flex Media Platform business in July 2019, with ongoing efforts focused around the evolution of the Ooyala Flex Media Platform for the management, curation, orchestration and monetisation of content.

The result is “a flexible model whereby a customer can use the Ooyala Flex Media Platform to be able to define whatever metadata structure is required in their business,” says Carter. “This could be the [standard forms of] metadata associated with a piece of video, but often it goes much further than that. Sometimes what’s needed is the ability to store metadata against specific regions of the video, so it may be an individual scene or frame in a video that requires you to store what we call timeline metadata. Then, when you are managing huge libraries of content involving [entire seasons] of a show, you will have metadata at both content and programme levels.”

With so much metadata in play, the Platform has been revamped over the last few years to provide “a single source of truth” whereby all metadata can be viewed in a common structure. “Depending on the level of access that you’re allowed, you can see all the metadata you need in one place,” says Carter.

“metadata and the part it plays in a media workflow is as important as the content itself these days.” - Matthew Carter

The volume of metadata to be stored by any given content creator is only heading in one direction, hence the “re-architecting of the Ooyala Flex metadata technology so it is possible to store not only the one set of metadata, but potentially a piece of metadata every few seconds in the video. If you’ve got a whole film that is three hours long then that’s going to escalate and become a huge volume of data.”

Like most vendors, Dalet anticipates AI playing an increasing role in the application of metadata, and already has an AI solution, Dalet Media Cortex, that can be triggered through the Ooyala Flex Media Platform. “Video can be sent to the AI engine, which then processes that video. The results of that process are returned and stored in the Ooyala Flex Media Platform where they can be easily searched and viewed by operators,” explains Carter.

Managed services for metadata
As a service provider working with many leading media companies, SES has become acutely aware of the dilemma they face in “deciding how much operational effort to apply to complex tasks related to multi-platform video delivery,” says Nishri. Hence the evolution of SES’ managed services offering, whereby “the client can offload all operations-related tasks and processing to SES and focus on content creation, sales and marketing activities. Using our tools, we review metadata by comparing and validating it based on requirements of the VOD platform provider, ensuring seamless content delivery.”

The solutions that SES uses for managing metadata are designed “mostly in-house, and run both on-premises and in the cloud. A major advantage of being able to manage metadata [in both these ways] is increased scale and access. Let’s say you’re a large media company and you want to be able to provide access to your content and metadata to many different buyers and companies on a global scale. The cloud makes that content highly accessible and facilitates easier data collection, streamlining the process.” 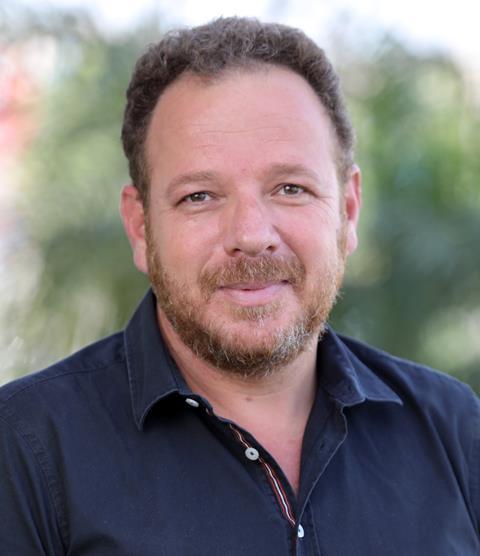 Looking forward, Nishri points to a greater role for AI in generating time-based metadata, as well as increased integration with other core systems, such as those for scheduling and rights management. “Many media companies have their own systems to manage programming and scheduling,” he says. “In some instances they are missing metadata or are unable to find it all. Through integration with external asset management solutions and other metadata sources, they are able to collect more data automatically and can process media based on those external metadata sources. For instance, rights management or programming guide metadata from external sources can trigger media processing and delivery.”

‘Full turnkey solutions’
Broadcasting and media services company Red Bee Media is another organisation for whom an end-to-end approach to metadata has become increasingly de rigeur. More and more, says technical product lead Christopher Stark II, “we are providing a full turnkey solution that involves the management of metadata across linear channels, on-demand services, subscription VOD or OTT, and so on.”

Stark agrees with the suggestion that the optimised use of content – both new and archive – is heavily dependent on “deeper, richer” levels of metadata. Hence the growing emphasis placed “on the ability to constantly extract time-based metadata that can be fed back into recommendation engines.” Being able to deliver recommendations that “help drive the user case and which allow [content creators] to speak to specific demographics” continues to become more critical as OTT competition intensifies.

Red Bee Media has been using its own proprietary platform for managing and monitoring metadata since 2001, but as demands have grown it has evolved the platform to integrate with machine-learning technologies such as IBM’s Python and Microsoft Azure Cognitive.

“We are using those technologies to help extract metadata in various ways, then aligning that information with the core metadata we are currently managing,” says Stark, noting that this combination enables the use of broadcast media assets to be “fully optimised”.

As the broadcast industry prepares for another sustained period of change – one in no small part shaped by forces that are beyond its control – the effective management of media assets and metadata will continue to be highly prized by content creators everywhere. Simultaneously, it is certain that there will be an even greater role for managed service providers as the responsibilities and implications associated with metadata become even more complex.