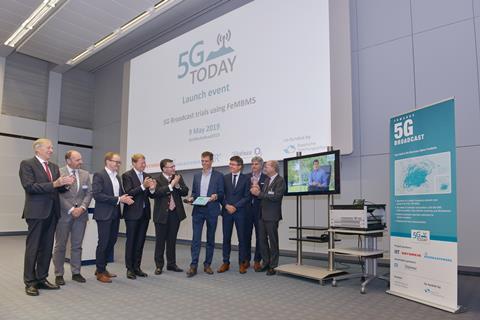 The 5G Today project was launched at the German Broadcast Technology Institute IRT in Munich today along with technology partners Kathrein, Telefónica Deutschland and Rohde & Schwarz.

The 5G Today project is a new large-area 5G trial located in the Bavarian alpine region. It is covered by two high-performance transmitters located in the Ismaning town and on the top of the Wendelstein mountain operating at 100 kilowatts effective output power (ERP).

The project trial is intended to lay the foundation for the efficient transmission of broadcast content in 5G networks and has been supported by the Bavarian Research Foundation since 2017.

Bavarian Broadcasting Corporation (Bayerischer Rundfunk) director general and ARD chairman Ulrich Wilhelm said: “We must design our future digital communications infrastructures in such a way that everyone can continue to benefit from the diversity of media content.

“I welcome the fact that Bavaria is playing a pioneering role in setting standards and in shaping our digital world in this sense.”

5G broadcasting
The operation was started using a tablet by Bavarian State Chancellery head and minister of state for federal and European affairs and media Dr. Florian Herrmann.

Herrmann said: “With this milestone, we are creating an impulse for the Bavarian media landscape.”

The project will test how 5G broadcasting can be used to create an overlay infrastructure that can simultaneously serve millions of future 5G mobile devices.

The aim of the trial is to remove latency and bandwidth barriers without burdening regular mobile networks or incurring additional costs for users.

Rohde & Schwarz is providing high transmission towers and the high power of the transmitters (High-PowerHigh-Tower-Concept, HPHT), with which the large-area broadcasting of TV programs can be tested.

The project is based on the new broadcast mode FeMBMS (Further evolved Multimedia Broadcast Multicast Service), which allows far-reaching and inexpensive distribution of popular content across large coverage areas with a radius of up to 60 kilometres.

The two test transmitters are operated as a Single Frequency Network (SFN) in channel 56/57 (750-760 MHz) using an antenna from Kathrein designed to distribute broadcast signals to mobile devices. Telefonica is providing the 5G spectrum for the trial.

IRT is developing a prototype FeMBMS receiver based on a software-defined radio (SDR) solution.

The project partners expect that in the future, this technology could be integrated into smartphones, tablets and TV sets for the reliable reception of live and linear content over 5G.

The test operation of 5G Today will run until autumn 2019, after which the results and further exploitation of the findings will be evaluated.