Heard the one about the TV comedy shot in 12K? Sky Deutschland has

A show about the history of comedy for Sky Deutschland’s new thematic HD channel Sky Comedy was shot almost entirely in 12K resolution, no joke. 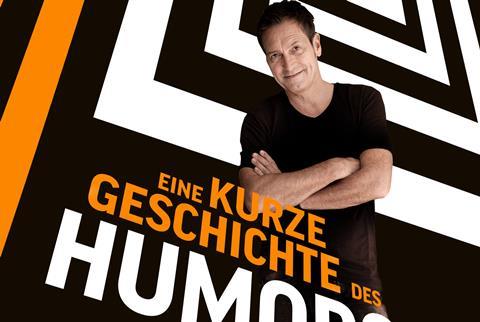 Eine kurze Geschichte des Humors was produced by Berlin-based indie B28 Produktion for Sky Comedy’s launch in Germany at the end of March. The 3 x 20-minute ‘infotainment’ charts humankind’s relationship with humour from the Stone Age to Monty Python and examines how and why we respond to ridicule, slapstick, surprise and satire.

Comedian Dieter Nuhr hosts the show which was recorded against green screen in an old electrical factory. So far so old school, but what makes production unusual - perhaps unique - is its acquisition using the Ursa Mini Pro 12K.

When it was released by Blackmagic Design last July, the camera was expected to find favour for production of high-end VFX shots rather than on a whole show, let alone a moderately budgeted TV programme.

A nervy decision
“It was entirely my decision,” says Marius Fischer, head of post production. “At first it was good. At the end it was good. In between it was bad.”

“He explained the idea and asked me how we could do it quickly since the show had a lot of visual elements. My initial idea was to shoot all greenscreen in 12K with the camera on a dolly at a permanent 90-degree angle. That way we can shoot it all single camera can and crop later in post. There’s no need to set up different angles or framing.”

That was important since the schedule allowed just one day of set-up and two days shooting to create at least 40 minutes of material.

It was seat of the pants stuff. Fischer did no tests before he got the camera.

“I downloaded some test footage from the Blackmagic website last November when I said we could shoot in 12K. My Mac crashed. At the time Davinci Resolve 17 (the software designed to work at 12K Blackmagic RAW/ BRAW) was in beta. I got a bit nervous. It was only a few days before the actual shoot, and I was afraid the plan wouldn’t work.”

There was a lot riding on its success. The show was earmarked as the first original to air on Sky’s new comedy-centric German language station. 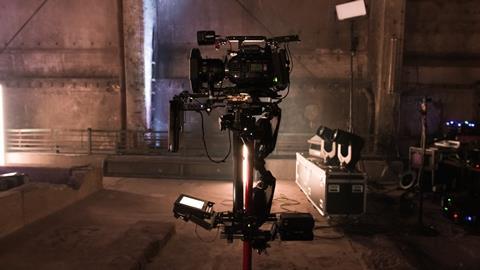 Sky Deutschland: The show was earmarked as the first original to air on Sky’s new comedy-centric German language station.

“I’d worked with BRAW since Blackmagic introduced it to market and I’ve experience working with Pocket Cinema Camera 6K so I was quite sure I could handle everything at 12K but we’d no chance to trial it. Some b-roll for the show was shot on the Pocket Cinema Camera 6K I knew I was going to post entirely in Resolve so we weren’t mixing colour science between sources.”

Fischer found only a few rental companies stocking 4K monitors and only one (Berlin’s See You Rent) with the BMD camera. He paired that with Zeiss Supreme Prime lenses. Director Kosei Takasaki and lighting director Jerry Appelt mainly used a 21mm for filming.

Cropping for speed
Shooting with high resolutions helps preserve the image downstream when keying and tracking but Fischer’s motivation to acquire 12K was as much about speed. Few parts of the show remain 1-1 as they were shot out of the camera. Since 12K is nine times greater than 4K UHD resolution you can crop 900% into the frame and still have a 4K output.

“It was entirely my decision…at first it was good. At the end it was good. In between it was bad,” Marius Fischer, head of post production

“There were times when I zoomed in 900 times I could still see details in the image – not pixels - it was detail,” he says.

The production placed tracking markers on floor and walls in order to place items like pictures and video in post. For example, academics discuss how the brain responds to humour and CG brain scans are overlaid. A clip of a Lumiere brothers short from 1885 (a classic gag involving a gardener treading on a watering hose) is displayed in a pop-up cinema screen.

They shot on Steadicam instead of a dolly for greater speed, adding to the need for more data and precision chroma keys. “Because the camera is constantly moving the tracking (Blackmagic’s Fusion) software doesn’t always pick it up from frame one. There may be 10 frames or so which are garbage when you track it but because we had 12K we could crop it out. Even cropping just 10% nobody would notice any issues with the tracking and it meant I didn’t have to do each frame manually.” 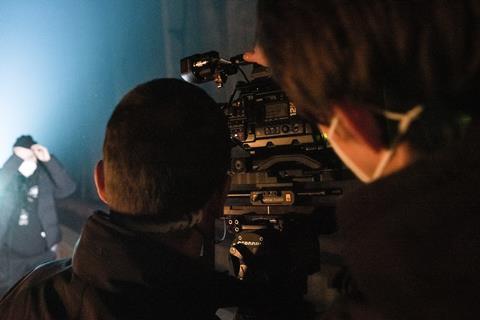 Cost: Surprisingly the cost to rent the URSA camera was just 180 euros a day

Fischer was also DIT and managed recording to Cfast cards. He chose the smaller 265GB cards “because I was afraid the bigger cards would overheat” and a compression of 5-1 equating to a data rate of about 390MB per second – or just 11 minutes of footage per card.

Media was saved to a Pegasus32 R8 RAID and Samsung T5 SSD for backup. He verified the material using Pomfort software Silverstack.

“There’s no tool built yet to verify 12K dailies so I couldn’t see any of the 12K metadata but I could at 6K.”

His doubts about the workflow persisted until he got the media into post. “What will happen if we take 12K into the timeline? I didn’t know. When we got into post we plugged in the RAID, created a new project in Resolve and put the 12K material into the timeline and it worked. No pre-rendering, no caching. It just auto-synced with audio into the timeline. It was crazy.

Even if we made a colour grade with 10 nodes or keying with eight power windows open it worked immediately. The only rendering was for VFX. I was relieved.”

Fischer edited on Resolve 17 running on a 2019 Mac Pro 12-Core with 196GB RAM and using 32GB Radeon Pro Vega II GPUs. Fischer found this insufficient for vfx in 12K and suggests 64GB cards instead. To the Resolve he attached an editor keyboard and a Mini Panel plus the Thunderbolt 3 capture and playback solution UltraStudio 4K Mini.

The delivery was only for HD broadcast though it is available on-demand at 4K via Sky Ticket.

“It would be possible to broadcast it in 6K were that ever necessary but not in 12K because it has been cropped so much inside the shot. The 6K footage is either uncompressed or 5% cropped.”

Don’t mention the cost
You might think that all of this a little unnecessary given the final output especially if there was any premium on the cost of handling the mammoth data in post.

Turns out that price was no issue. The URSA camera rental was Euro180 a day – less than the cost of the lenses.

“The industry has a real problem in asking for more money if production is done at any higher resolution than HD,” Fischer says. “I asked the CEO of [post house] Konterfei if we did 12K would he charge more and he said ‘No, it makes no sense’. We’re using the same storage, the same space, the same tools.”

Coincidentally, another groundbreaking production using the URSA Mini Pro 12K and DaVinci Resolve Studio took place recently. The camera and software were used as part of the HPA’s location to cloud production experiment highlighting how filmmakers can create and collaborate using cloud-based workflows regardless of data volumes.

The multi-film project was called The Found Lederhosen, and followed an experiment at the HPA Tech Retreat in 2020 called The Lost Lederhosen. To paraphrase Mark Twain. A German 12K joke is no laughing matter.