ITV Studios’ recently appointed head of production sustainability Phil Holdgate talks with IBC365 about how the global production giant is seeking to reduce carbon emissions and cut waste on its shows. 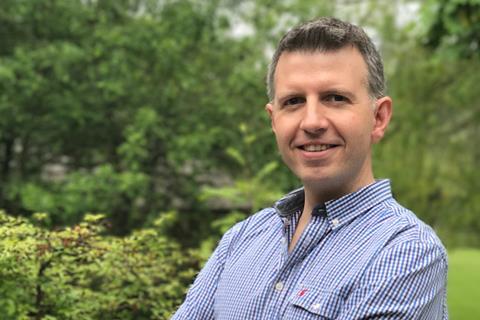 There are four key pillars to ITV’s plan: energy, waste, sourcing and culture. For energy and waste, it aims to hit net zero carbon emissions and zero waste by 2030; for sourcing, it’s planning for a 100% sustainable supply chain by 2030; and for culture, the organisation will roll out climate crisis training for all staff and mandate that all productions are environmentally certified from this year.

More specifically, ITV plans to reduce the emissions it controls, from buildings and operations, by 46% and to reduce emissions from products and services it procures and from business travel by 28% by 2030. ITV also aims to power the business with 100% renewable energy by 2025 and to have zero single-use plastics in operations, productions and its supply chain by 2025. All ITV produced and commissioned productions will be Albert-certified from 2021.

The broadcaster says it will offset remaining emissions with certified carbon sequestration projects such as tree planting.

Meeting targets
As the recently appointed head of production sustainability at ITV’s production and distribution division ITV Studios, Phil Holdgate is at the frontline of helping to deliver on these targets. His brief is to work across all ITV Studios productions worldwide – spanning 55 ITV-owned production companies in 12 countries.

Leeds-based Holdgate has been at ITV for 24 years, originally joining the Yorkshire Television ITV franchise as a trainee production accountant. After working as a senior production accountant mainly in scripted, he moved into project management on shows such as Emmerdale and Coronation Street.

It was at Emmerdale that Holdgate became interested in sustainability, using his finance and project management skills to set out the business case for greener production solutions. Holdgate developed a sustainability strategy for Emmerdale and then became sustainable productions lead at ITV Studios.

His new role consolidates his past experience. “The job really came about as a response to setting our net zero 2030 targets last year,” explains Holdgate. “It was clear we needed a dedicated resource – we were moving from planning to delivery mode.” 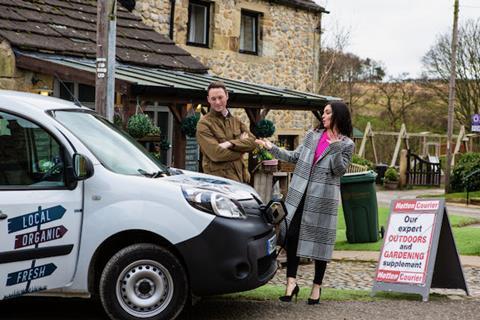 From the top down
Holdgate stresses that the climate action targets have been signed off by the ITV management board and form a key part of the company’s overall ‘More than ITV’ business strategy.  “That was really important – almost a turning point - because the message is now filtering down from the very top.”

He also points out that ITV’s targets have been vetted and approved by the Science Based Targets Initiative (SBTi), an environmental non-profit that helps businesses set targets to help limit global temperature increases to 1.5°C in line with the Paris Agreement.

Crucially for Holdgate, the targets have been agreed with the help and guidance of ITV teams. “They fully understand the business and know what is under the bonnet,” he says. “They have provided the foundations to build the strategy.”

Holdgate describes himself as a “huge advocate” of the four pillars of ITV’s climate action strategy. Reducing energy use is a key focus, he says, given that a major chunk of ITV’s carbon footprint comes from power, for buildings through to vehicles. Travel, in particular, is “by far and away the biggest standout area”, says Holdgate, and mandating the use of Albert is starting to pay dividends here. ITV Studios has also made some inroads into cutting power through switching to low energy lighting and to renewable energy providers.

Waste, he says, is a huge problem and is challenging to tackle effectively partly because it is difficult to measure. “One of my ethos is: if you can measure something you can manage it,” says Holdgate. “We really want to reduce the amount of waste we create in the first place, including things like single use plastics, but also increasing the amount we reuse and recycle first.”

Sourcing is a major challenge as some 95-96% of ITV Studios’ emissions sit in its supply chain, outside of its direct control.

“We’re finding that we’re really pushing against an open door. People are very engaged on the subject in general,” Phil Holdgate

The final of the four pillars is changing the culture at ITV Studios. “Being sustainable is everyone’s job,” stresses Holdgate. So, ITV Studios is rolling out bespoke training programmes and has mandated the use of Bafta’s Albert carbon footprint calculator and certification scheme. “We’re ensuring that sustainability becomes part of everyday business as usual when it comes to making TV programmes.”

This is important as research by Albert shows that one hour of TV production contributes 9.2 tonnes of C02 to the atmosphere.

Holdgate is currently engaging with each ITV Studios production team and label, finding out where they are at in terms of sustainable production and providing them with guidance and information. “We’re finding that we’re really pushing against an open door. People are very engaged on the subject in general. They know there is a huge climate and environmental issue, but the feedback we have had is that they’ve felt quite helpless. When you say, ‘there’s something in your work life that you can do,’ they’re really keen – they want to do more to help.”

Facing challenges
Three main challenges have already emerged from trying to lower ITV Studios’ emissions. The first, says Holdgate, is the transient, pop-up nature of productions. “It’s very hard to train a freelance base. You’ve got to make sure that if you do some great things on a drama, then you don’t lose momentum when you move from one production to the next. That’s where an industry-wide approach on sustainable production works really well and where the like of Albert plays a part. If Albert certification is the expectation for each production, irrespective of who you’re working for, that’s where you get real change.”

Industry collaboration, he adds, is going to be absolutely vital. “It’s a time-limited problem that we’re facing – so we can’t all waste time trying to fix the same things independently. That’s where Albert really comes to the fore and really can be the glue that binds it all together.” 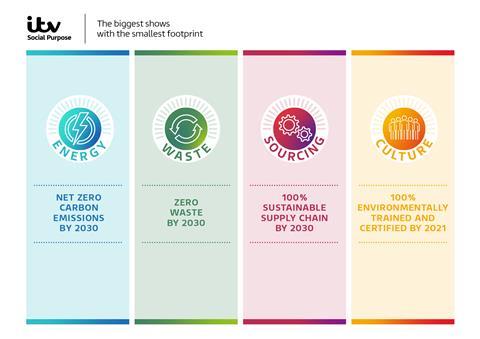 Indeed, Holdgate describes himself as an Albert “superfan”, pointing out that its industry-specific tools have been developed over 10 years. “They’re very fit for purpose in the way they allow you to measure each production’s impact and provide a framework to follow - so there’s no need to reinvent the wheel each and every time.”

The second big challenge facing production is the pace of green innovation. Holdgate cites the problem area of transport and the desire to switch to electric vehicles. Plug-in hybrid vehicles are now being widely used, but the next generation of pure electric, zero-emission vehicles has not yet fully arrived. “They are not quite there yet for our needs. I find that really frustrating because the demand is there – we just need the suppliers to catch up.”

Likewise, there are alternatives to dirty diesel generators, such as those using HVO (hydrotreated vegetable oil) fuel. “They are better but still not great. We’re looking at green hydrogen, we’re looking at batteries. Again, we’re relying on suppliers to keep up with demand. People would switch if they’re confident the innovations are fit for purpose, and we’re happy to work with people on that too. There is some really great stuff happening.”

For ITV Studios, another challenge in hitting its targets is the global nature of its business. “Understanding the various nuances, regional variations and limitations will be a bit of a challenge in the first instance,” says Holdgate. On the flipside, he thinks it could prove ITV Studios’ biggest opportunity, allowing it to pool resources and to share success stories and innovation around the world.

ITV hopes to meet its net zero target largely through cutting emissions but will also have to offset carbon use with schemes such as tree planting. “We’re really at pains to emphasise that this is the very last part of the puzzle,” says Holdgate. “We’d like to do everything we can to reduce our emissions, but there are some things currently that we can’t avoid. And that’s where offsetting has to play a part. But it is absolutely not a magic bullet.”

Open to ideas
Asked for his advice for those wanting to make their productions as green as possible, Holdgate recommends starting early – even in the development phase and certainly in pre-production. “Involve as many people as you can and bring everyone on the journey with you.” This includes the crew, cast, editorial team and suppliers. “Everyone has got a role to play. It shouldn’t be left to a couple of key people to make things happen.” Simple conversations and inclusivity can lead to amazing ideas, he says. By way of example, he points to the ITV Sports team setting up a cycling club and other teams suggesting meat-free catering days.

He suggests that productions should look at going green through the prism of value rather than headline cost. He cites hiring a diesel versus an electric vehicle. The latter might cost more to hire upfront, but the overall cost may be cheaper because it’s less expensive to recharge an electric car than to fill up a diesel vehicle.

One senses that, as ITV and other broadcasters look to reduce their carbon footprint, this kind of questioning around sourcing is only going to become more widespread throughout the industry.