Live sport often sits at the heart of a broadcaster’s premium content offering. And those tasked with creating delivering premium content are always looking to innovation, in quality, workflows, enhancing programme graphics and exploring social engagement to enhance viewers’ experience.

For the top tier of sport, 4K is a driver. 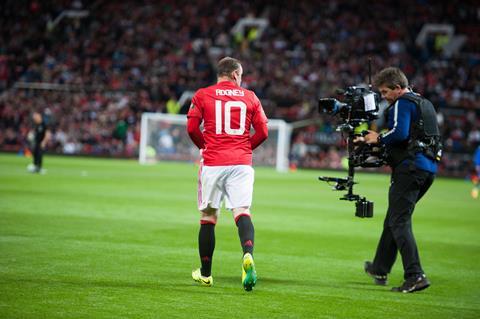 Wayne Rooney and cameraman at Rooney’s testimonial on BT Sport

“We are seeing an increase in 4K for some of the more important productions like the Premier League, but nevertheless we are seeing quite a demand for HD,” he says.

“They want the flexibility to switch from 4K to HD and they want the options so they can have, say, up to four dedicated channels for 4K or 12 for HD.”

In optics, the range of 4K lenses has dramatically expanded over the last year or so, notes says Klaus Weber, Grass Valley’s Senior Marketing Manager.

“Lenses for 4K have been available for a couple of years. Initially just a few models but now there is a full range of lenses from wide angle, regular and tele which are all available in 4K.”

The triggers to invest in 4K capture can be the need to work in 4K, or the need future-proof investments, he says.

“It can be related to the investment cycle of the customer. I think people who are still HD who invest in new lenses will want a future-proof solution. Something similar is happening with cameras where people upgrade to 4K cameras but use their HD lenses for the moment.” 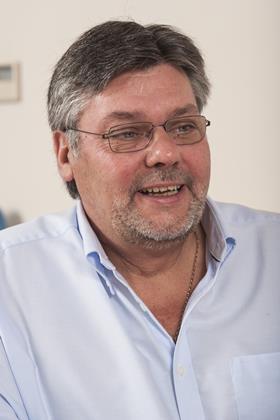 On the sports ENG side, the approach of upconverting HD, should be changing soon, as 4K ENG cameras and RF systems start to emerge, observes Presteigne Broadcast Hire Chief Executive Mike Ransome.

“It’s good to see that there is the PXW-Z450 ENG camera coming out from Sony.” With a lot of R&D effort into getting the right balance of quality vs latency, Ransome is also looking to the release of new RF links to work with them.

”A lot of R&D effort into getting the right balance of quality vs latency,” -Mike Ransome

“It’s a matter of which company is going to come out with the first 4K RF system; and the contenders are Domo, BWS and Vislink. If the transmitter is properly bolted on it can be used at many sorts of events.”

A curve-ball in upgrading the quality of the delivered picture, especially for second-tier events, is the re-emergence of 3G/1080p, notes Weber. A decade ago, with its need for 3Gb data streams, 1080p was considered too data demanding to be practical. Now compared to 4K it is quite modest, he says.

“When you combine 1080p with HDR and wide colour gamut you get a performance which is really good and getting close to the performance of 4K. People who are not major players believe this may be a solution.”

Graphics are following the 4K route, but so far only to a degree, says Mike Fredriksen, Commercial Director at RT Software.

“Sports is pioneering 4K, although we haven’t seen a huge take-up yet. Most noticeably it is the OB companies such as Timeline who have risen to the challenge.”

Instead, Fredriksen says, it is the technologies borrowed from other parts of the online experience that are gathering momentum.

“The top productions, like F1, Wimbledon and the Premier Football Leagues around Europe are using graphics techniques such as augmented reality to add the ‘eye candy’ to the presentation, but done in a smart way such as bringing in relevant stats to a piece, be it live at venue or in studio show.

Anyone interested in AR graphics is also very interested in ease of use, so for these solutions we see a huge interest in our vision based camera tracking systems.”

Remote editing for clips, highlights and non-linear content is emerging as a tool to help reduce the number of OB staff and systems needed at the location. Forbidden Technologies’ Blackbird codec, which creates a lightweight proxy, can be used to deliver a live stream from an OB event potentially reducing the need for on-site editors.

“It delivers video to editors anywhere in the world that has a computer connection of 1.5Mbits or above,” says Product Specialist Neil Roberts.

“At the moment it is about 15 seconds behind live which we are hoping to get down to about 5 seconds.”

The editing links back to the full resolution recording which can then be delivered via the cloud to the final destination in whatever format they need for their final deliverables. “So,” says Roberts, “a complete highlights clips package can be edited remotely and delivered 30 seconds after the final whistle.” 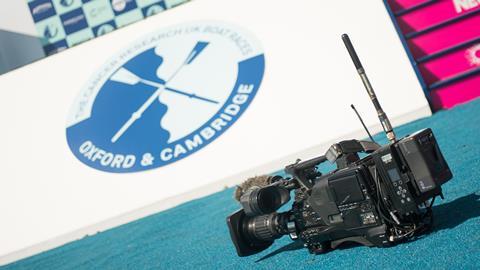 Presteigne camera used for the Oxford and Cambridge boat race

New workflows like this will be one of the beneficiaries of a broader adoption of IP infrastructures within venues.

Putting to one side the general SDI/IP debate, running cameras over IP is very much of interest in live sport.

With the IP bottlenecks going away, stations having their own IP networks will be able to connect, relatively easily, to remote cameras in the stadiums says Weber.

“In the stadium you just have the cameras handled over Wide Area IP Network. I expect in the next one or two years this will become a very big topic.”

Social media is a strong driver in sports, with broadcasters needing to cope with both linear and non-linear streams going out to mobiles, computers, and OTT, as well as bringing user generated content in from people at the event.

The ability to handle all of this additional content requires some level of dedicated automation says SAM’s Head of Product Marketing, Tim Felstead, who points to systems like Morpheus and Momentum as examples.

“We have been offering methods of delivering multiple linear channels in different resolutions to different consumption devices”, he says. “For non-linear consumption, social, and clip consumption, the automation triggers social media delivery - publishing a clip to Facebook and Twitter and in all range of formats, from production equipment in an OB track.”