How do you compete with Netflix and Amazon in the OTT space?

IBC2017: It might be thought that Netflix and Amazon Video, giants as they are, are the only kids in town as far as OTT is concerned – but there are interesting variations in how some smaller, more localised operators are competing, and doing well. 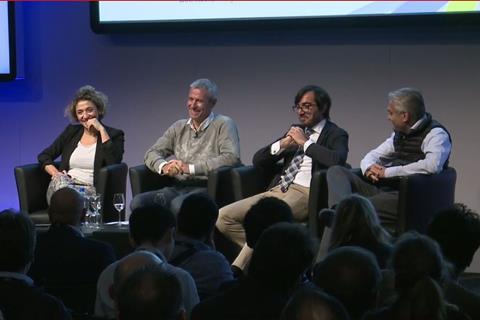 Analyst Ben Keen moderated a panel that included businesses from Italy, India, France and the UK, and they explained how their OTT services were competing with the well-heeled players.

Francesca Lossa, Mediaset Infinity’s VOD consultant, told delegates that Italy only had a 65 per cent penetration of internet. “We compete by being local, with often exclusive content that wholly caters to our audience which we know very well.”

Pranab Kapadia, Eros International’s President Europe and Middle East, said that the key differentiator for Eros was in deliberately capitalising on its 25-year archive and experience as a leading Indian studio. “We have 68 million registered users, and three million subscribers who want to see our movies. We release about 60 a year for a $2 subscription in India.”

Jean-Marc Denoual, Co-Founder of French service Molotov.tv, argued strongly that ‘ordinary’ TV was far from dead. “We have created a new, modern way to access channels and their content, and it is vital that we get the right content in front of our viewers.

“We have only just launched and have signed up one million users in less than nine months. We focus on TV, not as a specialist but offering more flexibility.” Denoual said they would expand out of France to a “neighbouring country” later this year.

Efe Cakarel is Founder of Mubi which is a global cinema-based service and often described as an ‘online cinematheque’ because of its loyalty towards high quality – and often – ‘festival’ award-winning movies. “We have been around for 10 years but had to change our business model once Netflix started buying up rights to everything.

“We now offer just one film a day which we keep available for 30 days. Increasingly, and to secure rights, we are ourselves becoming distributors.”