On International Women’s Day, NBC Sports made NHL history by producing the first-ever all-women broadcast on US airwaves. IBC365 chats to play-by-play announcer Kate Scott to find out more about the historic broadcast. 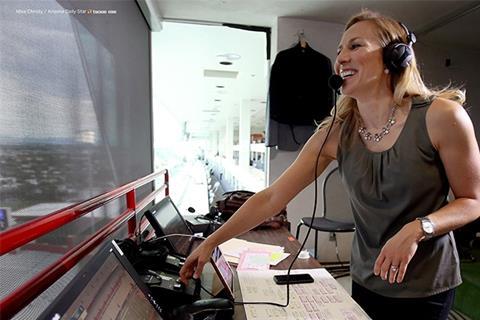 To mark International Women’s Day, an NBC Sports producer came up with an idea – a major NHL game between the St Louis Blues and the Chicago Blackhawks set to be aired on the service could be broadcast entirely by women.

The game, which took place on 8 March, was aired on NBCSN. In total, roughly 30 women worked on the game for NBC, both behind the scenes and on-air.

Far from the ‘boys club’ of many sports broadcasters, NBC employs dozens of women who produce and broadcast sports content. However, they rarely work together.

In an interview with ESPN, NBC producer Kaitlin Urka, who pitched the idea to NBC executives in December, said: “I hope when fans watch this game, they see it as any other game.

“And I want people to think, this is something that they’re going to see all the time, eventually. I want to get to the point where we don’t need to make this a big deal.

However, until then it is a big deal, with male-dominated crew ordinarily controlling the on-site cameras, interviewing players, calling the action and populating the production trucks.

NFL’s play-by-play announcer Kate Scott who called the action during the game spoke with IBC365 to discuss diversity, sports broadcasting and encouraging younger generations of women to enter the broadcast sector.

365: What is the significance of an all-woman crew to broadcast and produce the NHL’s Blues versus Blackhawks game?
Scott: This is our job. Rene Hatlelid [lead producer] and Lisa Seltzer [director] have been producing and directing NHL games for years.

While, AJ Mleczko, Jen Botterill, Kendall Coye-Schofield and Kathryn Tappen analyse and cover the NHL every day. But I think we can all agree there’s a big difference between seeing one woman on a broadcast versus a broadcast created and called entirely by women.

And that’s what our tape producer, Kaitlin Urka, thought when she passed the idea along to our management at NBC. How cool and impactful would it be if, for this one day, we came together to do our jobs, to really highlight all of the possibilities that exist for women who want to work in sports broadcasting and show them that being a former player isn’t the only route to doing this as a career.

“We came together to do our jobs, to really highlight all of the possibilities that exist for women who want to work in sports broadcasting”

365: Why has it taken this long for an exclusively female team to work behind the scenes?
Scott: I think for the same reason it’s taken so long for women to find their footing in a lot of industries, it really does help to see someone who looks like you doing something successfully before most folks dive into trying it themselves.

I can speak to that personally – knowing what I do now, I would have loved to try my hand at producing or directing, but when I was in college less than 20 years ago the only route I saw as viable as a woman interested in sports was side-line reporting, which is where my television career began.

We really are hoping the International Women’s Day broadcast shows young people who want to get into this industry, there is so many more opportunities than just being on-air. From graphics and replays and producing and directing to stage managing and shooting the games.

I can’t wait to shine a light on those I’ll be working with this weekend because we need more women in our trucks and control rooms, having a say over what the broadcast looks like and what stories we want to tell, and I think seeing others doing it successfully is a great place to start. 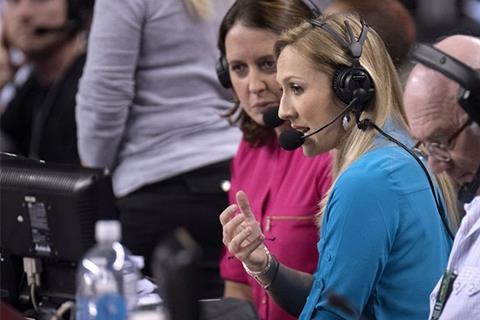 Game play: Scott has called games for over a decade

365: Will this all-women crew set a standard for future possibilities of women working behind the scenes?
Scott: I sure hope so. I’ve been calling games for over a decade and Sunday will mark just the fifth time I’ve worked with a female producer and the second time I’ve worked with a female director. Think about that. I’ve called hundreds of games, tons of different sports, across the US, and this will be just the second time I’ll be on a broadcast directed by a woman.

I’m extremely hopeful that a young girl tunes in and sees Lisa directing folks which camera to go to, when to zoom in, when to hold on a specific player and thinks to herself, “Wow. That looks really fun. I want to do that one day.”

“We need more women in our trucks and control rooms, having a say over what the broadcast looks like and what stories we want to tell”

365: What should viewers expect from the coverage? Any technical changes?
Scott: Viewers should expect the same product NBC always delivers. A professional, polished NHL broadcast featuring one of the longest-standing rivalries in the Western Conference.

The only difference being there’ll be a few more women on the show.

365: What does International Women’s Day mean to you?
Scott: To me, it means a day to highlight the accomplishments of women across the globe, hopefully inspiring the next generation in the process, while also showing our sons, brothers, husbands, and friends what’s possible when we’re given a chance.