VR is "exploding" but the industry needs to keep experimenting

For virtual reality (VR) to flourish creatives should keep experimenting with the technology which also needs to be embraced by the wider broadcast industry, according to Sky Creative Director Richard Nockles.

Speaking at the VR World event in London, Nockles said: “As an industry VR is exploding.

”As for where we go as an industry, it is all about pushing the boundaries and convincing rights holders to allow the cameras in, to allow a different style of capture, that is the key.” 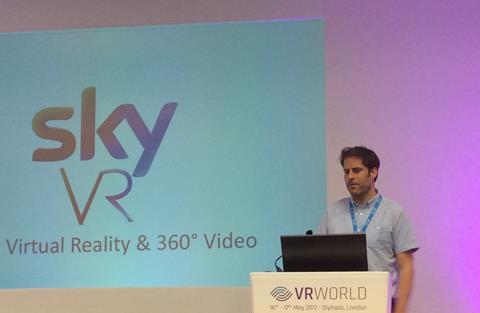 The question everyone wanted to know at the VR World event was is there a place for VR, AR (augmented reality) and MR (mixed reality) in consumers’ every day lives.

“2017 is about experimenting with the technology and working out how to commercialise in an attempt to get the best seats in the house. If you could put a head set on and be next to Tom Cruise, that’s my next goal,” said Nockles.

“We are still innovating, still experimenting and still pushing. This is a very exciting time as we are experimenting as an industry” – Richard Nockles 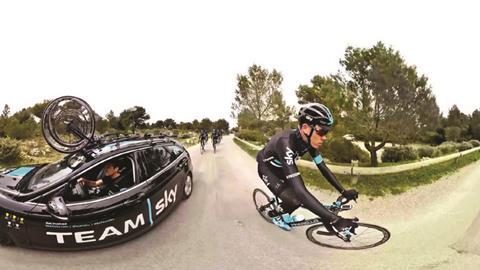 Team Sky VR app allows you to get behind-the-scenes

Sky is a keen advocate of VR; last year, the broadcaster set up its own in-house VR production unit. It has also produced a raft of VR content including behind-the-scenes footage of Team Sky’s preparation for the Tour De France (pictured), F1 VR experiences while Sky News has created 360-degree films of the migrant camp in Calais.

Nockles explained that shared experiences are key to VR and dismissed the suggestion from some critics that wearing a headset can lead to an anti-social experience.

“Panoramic, 360 video and the integration of CGI really works for us a broadcasters, and we’re getting amazing feedback from audiences,” he said.

“When you can experience sitting in the front row with your friend it is the ultimate social experience; it feels playful and exciting,” Nockles said.

The benefits to audiences are clear but questions remain as to how the technology might enhance enterprise.

The use of AR has become a key tool for collaboration and developing process efficiencies for fashion giant H&M.

Peter Hagstrӧm, H&M, Innovation Evangelist told delegates that the next step for H&M is using AR and green screen technology for consumers to try on clothes virtually.

“Some analysts say the headset market will be worth $45 billion, and some say $120 billion. What we can be assured of is that number is going to be huge” - Gary Radburn

Hagstrӧm predicted in a year the technology would evolve for consumers as well as designers to efficiently implement this technology in their work flows.

“The next step in this journey is collaborating globally from Sweden, to Hong Kong to Shanghai. Everyone together in one [virtual] room” Hagstrӧm said.

The potential efficiencies are enormous but the technology needs to evolve. Hagstrӧm said: “Imagine using social media, to meet your friends in a virtual fitting room”.

Beyond media and entertainment

Dell Inc, Director of Workstation, Virtualisation, Commercial VR and AR, Gary Radburn said: “Projections that the head set market itself is going to be worth $45 billion. Some analysts say $80 billion, some say $120 billion. What we can be assured of is that number is going to be huge.”

Radburn added that use of the technology is likely to spread into other industries, in particular training and health care.

He said 70% of the VR market today is based around media and entertainment, with 360-degree video mainly being consumed on phones.

”We are going to see a shift from the media and entertainment market into the commercial market and the health care market.

”In some instances that has already happened. The industrial market commercially is at 35%.

“VR technology is also being used to implement training techniques and skills in a timely and efficient manner,” Radburn said.