With many broadcasters still grappling with how to collaborate with freewheeling creators, has BBC Wales hit on the ideal model for community interaction?

For almost a year, Welsh anthropology student Izzy Harris has been a budding creator on YouTube - making and posting videos on her Izzy Wanders channel. She is committed to covering mental health and negative body image issues. 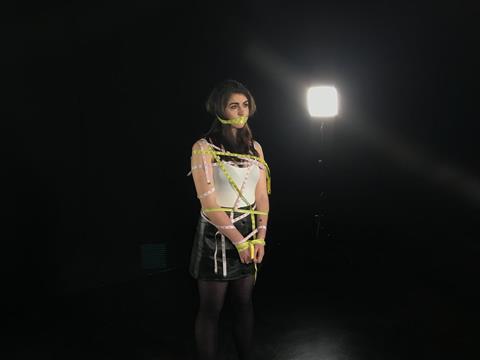 On May 10, she appeared on BBC Sesh, a new daily video service from BBC Wales which seeks to expressly collaborate with local YouTube talent

In a powerful two-minute video, she is wrapped and constricted by a measuring tape against a black background. She explores the physical toll that eating disorders has taken on her body, stressing to viewers that battling eating disorders “doesn’t make you a failure, it makes you a warrior. You are strong enough to fight this.”

Harris’ video is an example of the diverse content that the Welsh service is beaming out via social media platforms every morning. Every daily video involves collaboration with, and usually presentation by, a young Welsh content creator.

‘All the feels’
Launched on April 18th, BBC Sesh describes itself as concentrating on “funny stuff, lifestyle and all the feels”. Its first video, features comedian Leroy Brito being seized by patriotic pride while driving across the Severn Bridge into Wales.

Welsh people (when they see the Bridge)

BBC Wales Digital Commissioner Jo Pearce is one of the driving forces behind the channel: “I think it’s so important in terms of what we’re trying to achieve in attracting younger audiences to the BBC.” The platform is expressly aimed at 18-plus, allowing for more colourful language.

While comedy is at the platform’s heart, the daily video releases have been highly diverse, with creators tackling everything from mental health, to autism, to sexual consent.

The platform has gone from concept to reality in just over a year, with part of its motivation coming from addressing the BBC’s ageing viewership demographics.

“About 18 months ago, myself and Rhodri Talfan Davies, the Director of BBC Wales, started talking about how to engage younger audiences” says Pearce. “I started to do some market analysis around the country to find if there was anything really resonating with people in our 18-34 bracket.”

“We could see from audience research that funny content really resonated with that demographic. So the question was, how do we find funny young people who have something to say, and help entertain us as a nation?”

As part of BBC Wales, the Sesh team is tasked with ensuring that content would resonate with the country of three million people. Soon, a small team was busy at work researching the best creators, and reaching out to them.

“In terms of English speaking social/digital content in Wales, we found that there was very little that had portrayals of Welshness in it” says Pearce. “That is to say, content that explored who we are as a nation in 2018.”

‘The question was, how do we find funny young people who have something to say, and help entertain us as a nation?’ – Jo Pearce, BBC Wales

Creative differences
The collaborative process involved a creative collision between BBC’s story-focussed professionalism, and the longform aspects of YouTube content.

“It’s a learning experience on both sides” says Pearce. “At the BBC, we’re always trying to find the focus of a story and make it as tight as possible. However, with YouTube, it’s a case where longer form works, and the content tends to be less structured.”

“The videos can be anywhere from five to 30 minutes on YouTube, whereas we’re trying to make content that’s not beyond two minutes.”

On YouTube, thumbnail and title attractiveness is essential. This is something that BBC Sesh had to get good at, and fast. “You need get the viewer’s attention within the first two to three seconds” says Pearce, alluding to the cut-throat competition in newsfeeds.

“You need to be upfront - give an indication as to what the content is about. That’s a tricky thing to do in a creative way, without stamping things too heavily. It’s something we’ve done a lot of learning regarding.”

For Izzy Harris, it was an opportunity to broaden her horizons beyond the standard YouTube vlog format.

“The performative aspect was something new for me,” she says. “I’m not really someone who really performs very much, but I was really excited to get involved with a visual representation of what it’s like to struggle with an eating disorder.

“It was really helpful to get different opinions and help from people at the BBC,” she continues. “It was a new experience and opened up my mind to new ways of getting messages across.”

The fact that young people would be watching is what attracted Harris to the platform.

“I was aware that [BBC Sesh was largely] going to be comedy-based, but I knew it would be a good place to put up important videos. When you get a following who like funny and relatable videos, then you get a platform to showcase videos about important issues too.”

In recent years, many content creators have reported that monetising their videos on the YouTube platform has gotten harder.

BBC Sesh has opted for a direct, per-video lump payment system for those they collaborate with.

“I was paid, and it was on a per-video basis” confirmed Izzy. “It isn’t a massive amount, but for me, it was more about raising awareness than getting paid.”

An Example to Follow?
With the platform off to a strong start, it throws attempts by other public broadcasters to link up local content creators into sharp relief.

Tessa Sproule is a former Director of Digital for CBC and a Co-Founder of Vubble, a Toronto-based firm that ‘shines a light on content that’s quality’ for businesses.

She notes that the examples of public broadcasters pulling off long-term, successful relationships with independent creators in North America are limited.

“[With] a lot of traditional broadcasters that have gotten interested in this kind of collaboration, their stance has often become, ‘we’ll become the MCN [multi-channel network] meant for you, and we’ll manage things for you because you clearly don’t have the business acumen’.”

For Sproule it’s a mindset that hasn’t been productive, and that doesn’t value the creativeness of the YouTube creator.

“I think some broadcasters still have the attitude that a lot of content isn’t real because it’s not ‘professional’, or it lacks journalistic standards. To my mind, that’s a crazy attitude to have, considering what many creators go on to.”

She points out the fruitful collaboration that Canadian creators like Asap Science have had with Canada’s national broadcaster.

A couple-fronted YouTube channel focussing on science and education with almost eight million subscribers, the Ontario-based channel produced a range of sports-related videos for CBC in 2014.

PBS has also had some success with PBS Digital Studios, including a high profile partnership with the Green Brothers’ Crash Course educational YouTube channel.

However, beyond one-on-one collaborations, a more grass-roots embracing of content creators by broadcasters has yet to materialise in the US and Canada.

For Jo Pearce, while there is a overall evaluation period of 18 months in place for BBC Sesh, the level of real engagement (likes, shares and comments) on videos like that by Harris are part of her ongoing barometer of success.

“It’s incredibly important, because it’s such an important piece,” says Pearce. “Engagement on that, to me, feels crucial, because it means someone is taking away the message that she puts across so passionately in her video.”