Discovery’s ambitious plans for covering the Tokyo Olympics include a virtual studio Cube to connect presentation with remote athletes and provide opportunities for pundits to analyse performances and explain technique using augmented reality.

Tokyo is the second of Discovery’s four Olympic Games and if its production execs are feeling the pressure of recouping the €1.3 billion rights fee they aren’t showing it.

“We are the most complex sports broadcast in the world,” declares Scott Young, senior VP of Content and Production, Discovery Sports. 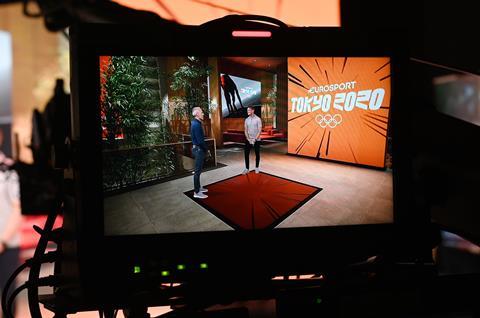 Alex Corretja (L) and Greg Rutherford (R) in the Cube

“Bluntly, the scale of our product is enormous. In terms of how we broadcast back across Europe on multiple platforms, including linear channels, discovery+, Eurosport and Eurosport app, is unlike any other broadcaster.”

The landmark contract signed in June 2015 saw Discovery and Eurosport take the pan-European rights (except Russia) for PyeongChang, Tokyo, Beijing and Paris 2024.

“This is our first summer Olympic games and we definitely want it viewed by more people across Europe than any other Games in history,” Andrew Georgiou, president of Sports, Discovery said. “We’ll achieve it because we’ve got the breadth of coverage.”

Aside from some IOC mandated sub-licence deals to Europe’s free to air broadcasters, Discovery will be the only place European sports fans can watch all of the Olympic action.

The pay-TV broadcaster is also placing its new subscription OTT Discovery+ at the centre of its marketing for all 3500 hours across 17 days.

“Discovery+ is our number one marketing push as a business,” Georgiou added.

“Its launch in January was a watershed moment for our company. In the markets where it has launched – Finland Sweden, Norway, Denmark and Italy – Discovery+ is our primary destination as the best place to enjoy the Olympics offering content on-demand as well as a curated linear experience.”

Aside from monopolising coverage, Discovery’s main selling point is its virtual studio ‘Cube’ which not only connects presentation with remote athletes but provides opportunities for pundits to analyse performances and explain technique using augmented reality.

Like the BBC’s Olympic virtual studio, Discovery’s also has a Japanese architecture design which appears to offer space on several levels. The physical studio, based in Stockley Park, is merged with a Tardis-like virtual set with the ability to present full body 3D live video of athletes remote from Tokyo interacting with presenters.

While some athletes will be allowed into the green screen at Discovery’s operations centre on site (depending on national team and IOC rules) others can be connected from remote operated cameras in team camps and Zoom and displayed on a large screen within the Cube.

“If you sit at home and don’t notice the environment is not real then we’ve done our job,” Young says. “If we had to pack up [a real-world building] and bring it over here, it wouldn’t be a prudent investment. One of our shots pans from showing the city back into the balcony and would require a camera placed in the parking lot – if it were real.”

The multi-level virtual set features day and night time lighting scenarios and interactive virtual elements such as trees moving in the wind.

“The Olympics is broadcast for two weeks not a day and we want to keep the environment in which we tell that story as fresh as possible,” Georgiou says. “We have different locations and lighting designs depending on the mood of the editorial. We want it to be an interactive experience not just a passive set.” 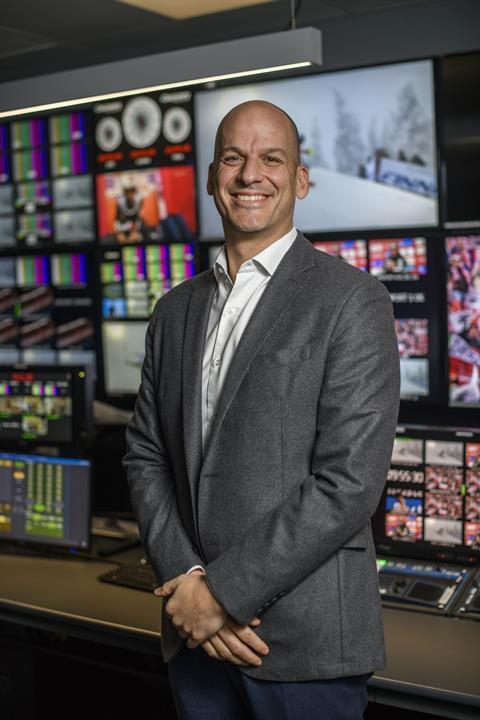 Discovery execs are coy about detailing the tech partners which worked on the Cube 2.0. All indications suggest it is based on the core hardware created for 2018 and subsequent Open tennis coverage by White Light using disguise servers and BlackTrax camera tracking with 3D environments created in Unreal Engine. Unreal is the only tech confirmed by Discovery.

Young says, “Our desire is to push the tech to the absolute limits. Once you’ve developed a single layer Cube that you can teleport people into our challenge has not been to rest there. This is a multi-storey environment that creates quite an extraordinary location to present from.”

A key physical change from Cube 1.0 is the removal of one of its three walls. In Pyeongchang, Eurosport were shooting entirely inside the LED volume – much like how virtual production is being used to shoot shows like The Mandalorian. Cube 2.0 has two walls 90-degrees to each other with a virtual set extension built in Unreal affording a much greater flexibility of camera angles.

Since remote production is now an “essential part of sports broadcast” it wants to bring the action back to a home base the size of the Cube.

“We are only bounded by our creative process but we are reaching the limits of the speed at which we can create and develop on traditional [broadcast] virtual graphics platforms. [Going forward] we need to strategise with suppliers from the gaming world who can develop at the same pace we can think.”

Background noise
While Covid-planning has been part of the production picture for many months, it was always hoped there would be at least some spectators at the venues. Now that is not the case, OBS is working out how to add back some live atmosphere.

“There’s been a lot of conversation about virtual fans in audio and in vision,” Young explains. “Doing either amplifies the complexity of the Cube off the charts. Planning on this didn’t get far because until a few weeks ago everyone was confident enough that fans would be allowed in venues to make an atmosphere.

Read more How OBS plans to immerse viewers in the Olympics

”Unfortunately, that has changed. The IOC and OBS have looked at how to introduce virtual crowd noise. It’s not an additional audio channel that broadcasters can choose to add (as for football matches last summer), it will be introduced as part of the overall atmos mics in the final mix. They are working on this now. We don’t have a hand in it.”

Young goes on to explain that the background noise will be created live by production teams of OBS and other broadcaster crew. “We are quite pleased with the approach and think it’s the most natural virtual crowd effect that they come up with. The real challenge is for participating athletes and how they will respond since, as we’ve seen at Wimbledon, the crowd creates so much.”

Contribution and distribution
By and large the technology set up has remained unchanged since the Games was postponed a year ago. The impact on travel has been significant in terms of Discovery’s ability to operate in Tokyo en mass (it won’t specify numbers other than hundreds of personnel in Japan and thousands working on production in Europe). Globecast is a connectivity partner and NEP is providing on-site facilities.

“Every day we sit down with OBS and other key broadcasters and work through changes unfolding in front of us,” says Young. “Our starting point is always what is the fan experience going to be at the end of the chain, not what issues do we have at the beginning.”

Latency is said to be “slight”, making realtime ‘teleport’ conversations within the Cube possible. “The bandwidth is such that we send back full resolution, full audio and video for the Cube so it’s not compressed in anyway which would bring in latency,” Young says (pictured below, right). 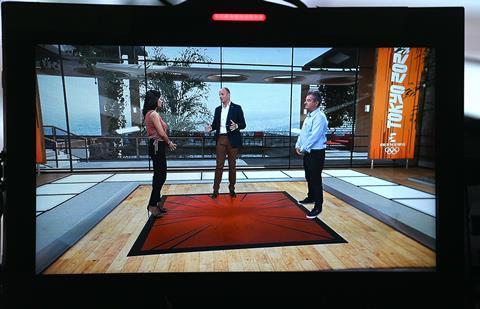 Discovery is contributing a package of 164 feeds to Europe including 44 in UHD. It is distributing one channel of UHD content, taken directly from the OBS host feed, versioned for language.

The primary role of the technical facility in Tokyo is to deliver those feeds back to hubs in London and Paris. From there it distributes out to key markets for home-based production. A diverse disaster recovery network follows three different paths, one being fully IP via Google Cloud.

Additionally, Discovery has 16 video journalist kits and another set of ENG kits at venues that send signals back directly to hubs in Europe (via 288 cell SIM cards). These will primarily cover mix zone interviews with athletes relevant to different Europe markets.

“Most what we’re doing in Tokyo is not finalised content but to feed everything back to Europe where it is finalised,” Young says.

The main distribution hub for receipt of all the feeds and all commentary is Paris with secondary distribution for different territories (e/g the TX of the feeds across the UK and Nordics is done in London. This also acts as redundancy for Paris).

Discovery is also one of the few rights holders taking the Olympics Virtual Reality package. “Within that there is some amazing footage we can use across social media. We are working with them closely on how to create unique immersive content to share not just for studio broadcast but across digital platforms. That’s where our content management system goes from a live sport broadcast to curating short form stories and into 30 second clip creation.

“That’s why it’s important for us to take not just the curated content but the wide shots, beauty shots, close-up camera angles that we can split out as part of our additional coverage. We’re looking to give viewers a new approach and analysis for each sport.” 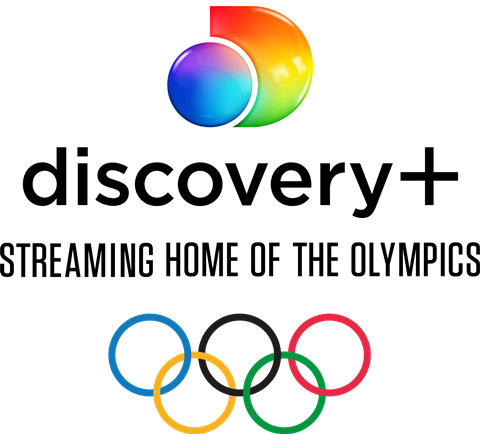 Green screen feeds for the Cube plus floor feeds from Stockley Park are mixed at the control room in Chiswick.

“We can teleport in anyone from any of our studios around our network including studios at Copenhagen and Warsaw,” Young says.

Discovery did this for the tennis coverage where a presenter can interview a pundit and neither need be standing in the Cube but in green studios with the feed composited at the Chiswick control room.

The Cube is also the setting for new sets of AR analysis tools which will be used across 7 Olympics sports. Greg Rutherford, 2012 gold medal-winner and part of the on-screen team for Tokyo in the UK and Ireland, said: “After the Olympics I never really reviewed the minutiae of what I did, but the new Cube tech has allowed me to take a closer look at the building blocks of that jump and see it in a different light. This is the amazing insight that the new Cube will offer to viewers of Tokyo 2020.”

Execs hope that once the cauldron is lit attention will be diverted from Covid and a less than enthusiastic Japanese public to a narrative of the Olympic spirit. Engagement will be tracked across all screens and platforms using Discovery’s bespoke Total Video metric.

Not only are plans for Beijing 2022 advanced but discussions are well underway about coverage from Paris in 2024.

“By then you can expect to see Cube version 6.0 which will be able to take off and teleport itself anywhere,” jokes Young