Sales of 4K and UHD devices are set to grow by more than 50% by 2023, with streaming services leading investment into 4K programming.

The general public are buying 4K/Ultra HD displays at an enormous rate. Indeed, it is difficult to go into a retailer and find a set that is not equipped for UHD. Paul Gray director, research and analysis at IHS Markit, says that globally more than half of all TVs shipped in Q4 last year were 4K. In Western Europe 63% of shipments were 4K.

Falling prices are helping sales, and buyers are opting for ever-larger screen sizes. Next year’s global sales will easily top 130 million units, and 55” now seems to be the ‘sweet spot’ in terms of screen size, at least for European consumers. 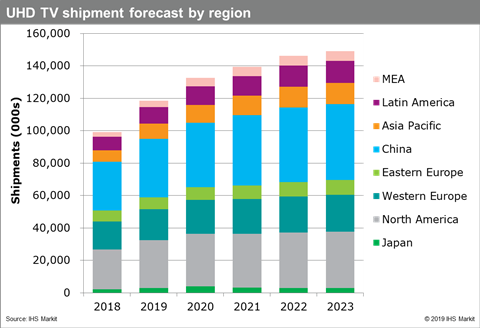 The other obvious boost for sales is the growing number of UHD channels and programming now available. Across Europe it is the pay-TV operators who are leading this charge with the likes of Sky and Canal Plus pushing 4K content, in particular in Sport and Drama. These broadcasters are investing in new 4K episodic drama productions, and the results are flowing onto subscriber screens.

Satellite operator Eutelsat’s Michel Chabrol, speaking at the April MIPTV event in Cannes, said there are now 155 Ultra HD channels (or feeds) available around the world, and up an impressive 24% over the past year. Some markets have an impressive number of 4K channels available. For example, Russia’s TricolorTV has 5 full-time UHD channels on air. Italy is also enthusiastic with 3 full-time 4K channels available, plus an occasional 4K service from Vatican Media.

Streaming services
However, there’s another pair of major 4K players, each with a fast-growing global impact: Netflix and Amazon Prime. Whatever modest amount the likes of the BBC might invest in 4K programming, Netflix exceeds 100-fold and more.

Currently, the BBC’s 4K efforts are mostly focused on Natural History output from their Bristol Natural History Unit. Their long-term investment in 4K (and to a certain extent even higher-quality 8K material) is geared not so much for transmission in the UK but to help build a ‘future-proof’ archive and generate overseas sales. Viewers can access a modest amount of 4K programming via the BBC’s iPlayer.

Netflix, for example, added 9.6 million net new subscribers in the quarter ending 31 March and taking its overall subs base to almost 149 million. New shows such as ‘Umbrella Academy’ were viewed by a massive 45 million households. It even managed to out-perform the BBC with its ‘Our Planet’ show, narrated by Sir David Attenborough (and made by former members of the BBC’s NHU) and available in 4K.

Last year, Netflix invested more than $8 billion on content and this year is expected to double that sum. BMO Capital Markets analyst Daniel Salmon says that next year Netflix will spend some $17 billion on fresh or acquired content. This outspends the combined total of the BBC, Sky, Canal Plus and the rest of Europe’s mainstream linear broadcasters – and almost everything is commissioned in 4K. Netflix says 85% of its investment is on new content, whether The Crown or more than 700 other annual commissions. What’s more anyone with a suitable 4K set (and paying the extra premium for UHD reception) will see regular on-screen ‘bugs’ flagging that the show is also available in ‘HDR’ or ‘Dolby Atmos’.

But where’s 8K?
While some enterprising content producers are capturing material in 8K, there are as yet few opportunities to view 8K material except in Japan and South Korea. Delegates at MIPTV in Cannes enjoyed a spectacular half-day of examples in April, from Japan of course but also from the USA, France and Italy.

“There are as yet few opportunities to view 8K material”

The event showcased a portfolio of stunning images from NHK, Japan’s public broadcaster and which went ‘live’ with a 12-hours-a-day 8K channel back in December 2018. While their opening day kicked off with a live transmission from Rome, plus an exclusive digital remastering of Stanley Kubrick’s 2001:A Space Odyssey, delegates in Cannes saw a similar remastering of My Fair Lady, the 1964 musical which has been wonderfully restored (by Robert A. Harris) in a “seven figure” high-end labour of love removing around 12 million celluloid glitches in the images that finally ended up looking, as one reviewer commented “just loverly”.

Cannes delegates viewed the screenings on a massive 98-inch Sony Master series Bravia LCD screen, and while nobody admitted to seeing the adhesive on Rex Harrison’s toupee or Audrey Hepburn’s teeth fillings, evidently were there originally for the eagle-eyed in this magnificent re-release! 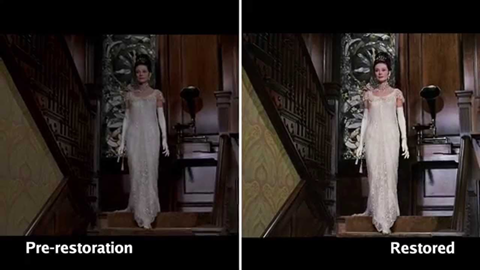 NHK also treated attendees to some Sumo wresting from the annual ‘Grand Sumo Tournament’ which may not be everyone’s favourite sport at least the images were fantastic. More traditionally, NHK screened clips from one of their major investments where crews visit some of the world’s most popular tourist locations. ‘A two-hour tour of the Palace of Versailles’ and exploiting the fact that most Japanese tourists take just two hours to visit one of these locations.

But it isn’t just Japan that’s turning out spectacular 8K footage. For example, just about every IMAX film is captured in – at least – 8K and these are very suitable for broadcast. K2 Studios are producing extensively in 8K for the giant screen industry with a portfolio of more than 70 movies and have been shown in IMAX Theatres, museums and science centres such as the Smithsonian in Washington DC. Delegates saw K2’s stunning ‘Volcanoes’ plus a clip from (acclaimed director) Stephen Low’s ‘Rocky Mountain Express’.

Toulouse-based Saint Thomas Productions are at the forefront of 8K filming and are regular suppliers of natural history footage to the BBC’s NHU and to broadcasters such as Discovery and National Geographic. They have just returned from filming the Japanese Hayabusa 2 spacecraft landing on the Ryugu asteroid in February and collecting rock samples from the asteroid. CEO Bertrand Loyer explained to delegates the technical challenges of rendering these images. His message was clear: for 8K to be a practical proposition the industry must speedily improve compression ratios and massively improve specialist computer processing for rendering and editing.

French production house Paramax Films are making considerable investment in 8K, including a feature film, plus jazz and music concerts in 8K. Clips were screened from “Music Hole” and a Michel Legrand tribute concert.

Also based in France is The Explorers, a world-class producer of documentaries focusing on our planet. They are busy shooting in 8K and have output deals with – amongst others – Apple TV. The Explorers were just back from Tahiti, in French Polynesia with magnificent 8K footage.

NASA TV screened quite ‘out of this world’ footage from the International Space Station, and shot in 8K. Joel Marsden, NASA TV’s executive producer, said the 8K decision was quite simple: “It is the best technology available. And we are protecting that footage for future use.”

The Cannes event was an enormous success and TV acquisition execs filled the theatre to see – and for many, to buy – the material on show.

One final fact, and back to IHS’s Paul Gray. IHS forecasts that by 2021 global sales of 8K sets will top three million units, and double that by 2023. While China will remain the most enthusiastic market for 8K, North America and Western Europe will also be buying into 8K.