VFX: Valerian and the City of a Thousand Planets

From an immense space city to a Lexus inspired spaceship, Rodeo FX played a crucial part in bringing director Luc Besson’s vision of the graphic novel to the big screen

Luc Besson’s latest movie, Valerian and the City of a Thousand Planets, is a visually spectacular $180m action adventure set in the 28th century. 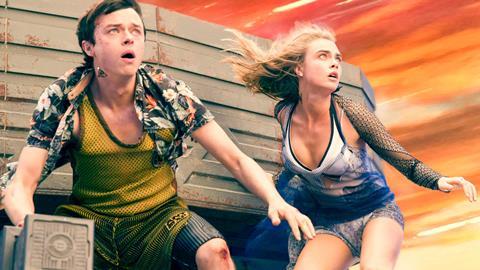 Based on a French comic book series, and produced by Besson’s own studio EuropaCorp, the film follows the eponymous Valerian (Dane DeHaan) and his fellow special operative Laureline (Cara Delevingne) as they go in search of the evil forces trying to destroy Alpha, the peaceful home of species from a thousand planets.

As it is a fantastical sci-fi vision of the future, it will come as no surprise to learn that Valerian is hugely reliant on visual effects (VFX). In total, to create the various aliens, planets, environments, cities and spaceships, a total of 2,355 shots were created.

To provide an idea of scale, that is 600 more than were required for Rogue One: A Star Wars Story but about the same as Alien Covenant.

With a huge amount of work required, a number of VFX houses - big and small - were brought on board, overseen by main VFX supervisor Scott Stokdyk.

Weta Digital created the majority of the creatures while Industrial Light and Magic (ILM) took charge of two major set pieces. For the key spaceships and space stations, Besson and Stokdyk turned to Rodeo FX.

US and Canada-based Rodeo created Alpha, the iconic and highly detailed space city, and Intruder, a spaceship piloted by the main protagonists. It was also responsible for the design and build of Sky Jet, a smaller ship capable of flying into the depths of Alpha, and for the creation of a vast space battle sequence featuring both human and alien motherships and 50 other smaller spacecraft. 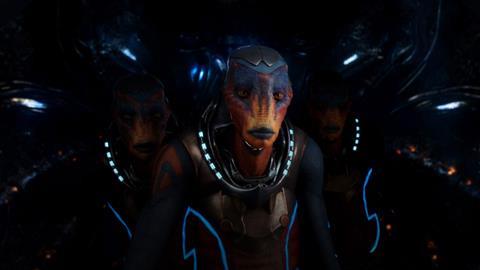 To gain inspiration for their elements, the Rodeo team went back to original graphic novels and eked out as much information as possible from the many elaborate designs. They also referenced other graphic novels before creating rough concepts that reflected the original comic book ideas but gave them a modern twist. These were shown to Besson. It gave Rodeo a chance to get a sense of what the director did and did not like.

“As we went along we figured out what shapes would fit into the movie and which ones wouldn’t,” explains Peter Nofz, one of co-VFX supervisors for Rodeo. “It evolved over time. But what was clear from the get-go was what Luc wanted. He would immediately tell us yes or no. He doesn’t always know how he is going to get there but he knows where he wants to go. That made this project so enjoyable. There was never any wavering.”

As the designs evolved, two things quickly became clear: a lot of elements were required and the detail within those elements would be crucial.

This was particularly apparent for the space battle that saw Rodeo’s modelling team build both the human and alien motherships, along with some fifty unique smaller spacecraft. This long sequence of complicated choreography also involved multiple explosions and shields.

For the creation of the spaceships, to make the process as efficient as possible, a workflow was devised that allowed Rodeo to not only build the many hundreds of assets but also keep track of them.

Rodeo’s pipeline saw Maya used for modelling and animation, Houdini for effects, Nuke for compositing, Mari for textures and painting and Arnold for rendering.

“We put together a sort of spaceship assembly line,” explains Nofz. “We would model it first and then it would go into texturing and then into lighting and so on. The spaceships would then literally drop out the other end, one after another after another. And we would place them in the scene. That assembly line was going for at least 12 months.”

“Deep” compositing was required in order to successfully manage all of the elements, he adds.

Where possible, the complex elements created for the spaceships were also re-purposed elsewhere. “Every time you build a little piece, it’s a shame to not re-use it. Some bits of spaceships were used on Alpha, the big environment, for example. It became a massive undertaking.”

Alphas is an immense city planet that started out as an International Space Station (ISS) and then evolved into a vast urban cluster in which thousands of species from around the universe co-exist in harmony. The urban environments reference a number of 21st Century cityscapes including Hong Kong’s Kowloon Walled City and New York City’s Times Square. It is an incredibly complicated and detailed vision.

“We started building a model of the ISS for the title sequence and then we kept adding to it with more modules, environments and spaceships to turn it into Alpha. We nicknamed it the city of a thousand assets.”

“It’s all about the nuances,” he continues. “Every little piece was manufactured in a digital way and pieced together. That is what took the time. And that is what makes it exciting. With this movie we definitely made sure we used all of the available memory on our computers!”

For the main space craft, Intruder, attention to detail was again key. 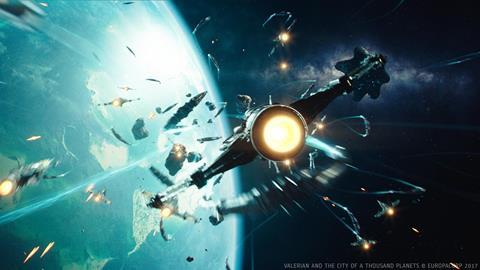 “This was the thing we absolutely wanted to get right,” he says. “It was the first spaceship we worked on. We went over it again and again. Over the years it has been drawn in so many different ways so we had to come up with a compromise that combined all the different versions but made it contemporary. I see it as extracting the essence of what Intruder was and then updating it for a modern audience. ”

While Intruder was important, its evolution was relatively straight forward. The same cannot be said of Sky Jet.

Working with engineers from the car manufacturer Lexus, designs for Sky Jet had already been agreed and a model had been built and filmed on-set. That version of Sky Jet is not the one that made it into the final film, however, although it does still feature the Lexus badge and various other recognisable luxury car elements.

Nofz says that “even though we already had a scan of the model, it was decided that Sky Jet wasn’t quite right.” This meant they had to change the design. “We couldn’t change it completely as that would have been extremely expensive,” he says. “So we came up with something that was more streamlined. We went around the block three or four times until we figured out a design that looked right and would still work with the plates that had already been shot. It was a very interesting exercise.”

In total Rodeo created 363 shots for Valerian. The project took two years to complete with 18 months of production following six months of pre-vis.

“I am really proud of the work we have done,” concludes Nofz. “We all want to work on the sequel.”

Valerian and the City of a Thousand Planets is released in the UK on 2 August.