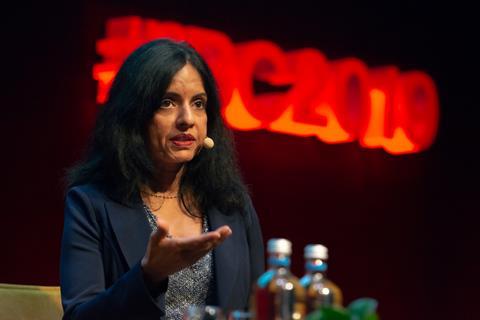 Voice could play a key role in shaping the future of the global entertainment, according to Android TV senior director Shalini Govil-Pai who gave IBC delegates a glimpse of the future during a Keynote session.

Speaking at IBC2019 Govil-Pai said that research at Google’s Android TV service had shown that TV platforms would continue to be a blend of broadcast TV and OTT on demand content for the foreseeable future.

“The big trends we see are that broadband to the home has driven AVoD, SVoD and TVoD services, which is great for consumers because it creates a lot of choice. But the world isn’t ready for OTT only services – we think a mixture of broadcast and OTT content will continue.”

“We will also see voice technology, such as Android TV’s Google Assistant, continuing to create more natural ways for viewers to interact with services. They don’t want to be pulling out a keyboard in their living room.

“Voice is becoming really ubiquitous, with the roll out of technologies such as Google Assistant and Alexa. We find that it’s the user who has to be trained. But when they get it, it’s a magical experience. As natural language processing improves there is no doubt in my mind that will become more mainstream and more powerful.

“People will use it to turn on the tv, find the content they want, control the lighting in the living room and show them who’s at the door when the doorbell rings when they are watching TV.”

For older demographics “it’s even more powerful” she added. “My mother was never a technologist but she really gets on with it and found it easy to use.”

Govil-Pai insisted that traditional media had little fear from Android TV which she said was now deployed in 6 out of 10 smart TVs and was used by over 140 pay TV operator partners, including LG U+, Bouygues Telecom and Telecom Italia.

“We are definitely a friend, bringing live tv and OTT services to users. The challenge is can we also use machine learning to determine user profiles, and use that information to get the user to the content that they love faster?

“We can also help build businesses with targeted advertising at an aggregate level – which is a lot more interesting to the viewer than just a generic ad. We have been working a lot on that kind of thing.”

Govil-Pai also issued a blueprint for survival for TV businesses. “It doesn’t really matter so much whether you are big or small. Both have their advantages and disadvantages. If you are big you have more resources. If you are small you have the advantage of being able to move fast.

“Do you have the conviction that your business model will work, and do you have the persistence to stick with that conviction? You may need to pivot, whilst staying in tune with what your viewers want. Ask ‘What are my viewers saying to me?’ Understanding the user is key – so it’s really important to collect, understand and use data about what they want.”

For a company to succeed it needs to do three things well, said Govil-Pai. “Quality and reliability of the service is the key. Second is getting all the right content and apps that users want onto Android TV. “Third, keep a finger on the pulse of the consumer. Ask if your product is satisfying the needs of the consumers: ‘Are they getting all the content that they want?’”