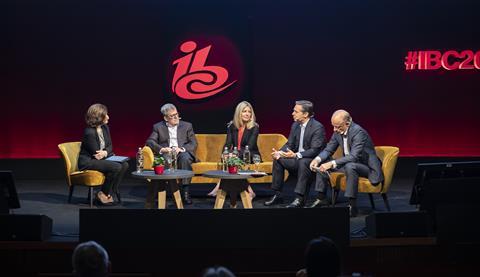 Next Generation TV: The panel discuss

Where would IBC be without a panel looking at ‘Next Generation TV’ and the threat to conventional broadcasting? IBC 2019 is no different, and this year’s session compared and contrasted HbbTV (Hybrid Broadcast Broadband TV) and the USA’s ATSC 3.0.

Vincent Grivet, chairman of the HbbTV, stressed that this was a fascinating time for broadcasters, and that “ordinary” TV was far from dead. “The good news is that HbbTV is playing a central role in the reinvention of TV. And the changes are going to please viewers. Indeed, we see platforms such as Freeview being as important, and perhaps as valuable as Netflix.”

“Stage 2 is to bring broadcasters together onto a common unified platform, as has happened with Freeview in the UK, Tivu in Italy and shortly Salto in France. This allows Stage 3 to happen which is targeted advertising for linear TV broadcasters,” said Grivet.

The USA’s changes are dramatic and ATSC 3.0, already having been extensively tested in the Phoenix, Arizona trials will reverse the loss of traditional viewers to cable, the Internet and OTT, says Anne Schelle (MD, Pearl TV, and a Board member of the ATSC 3.0 Committee). She explained that even though ATSC 3.0 was not backward compatible, the US would benefit from its introduction in South Korea which would mean Generation 2.0 and Generation 3.0 chipsets would be available for sets sold in the US.

“ATSC 3.0 allows new business models to evolve and a revolution for over-the-air broadcasters.” She added that CES 2020 would see major announcements on ATSC 3.0.

Richard Friedel, EVP/Technology & Strategy at 21st Century Fox, told delegates that Fox felt it was time broadcasters struck back. He explained that Fox’s stations already covered some 60% of the US market and that ATSC 3.0 would bring extra information, interactivity and more revenue-generating opportunities for broadcasters.

“Just think of this: we have an extra 25 Mb/s of bandwidth. This is a huge advantage and extremely alluring. Our costs are a fraction of that needed for 5G, and ATSC 3.0 gives us access to vehicles fort data and back-seat entertainment. It’s early days but we’re very excited.”