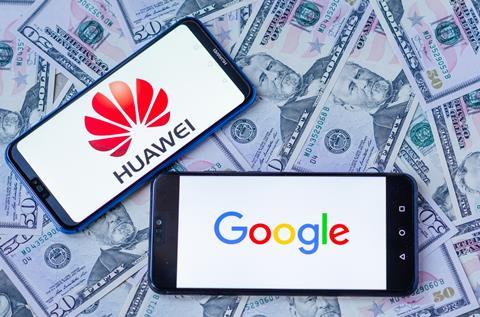 The US has added Huawei to a list of firms American companies cannot trade with unless licenced to do so.

Google is the first major technology company to enforce a ban of Huawei by restricting access to its Android operating system after the US blacklisted the Chinese firm.

Alphabet Inc, Google’s parent company, confirmed its business exchange with Huawei - which includes the transfer of hardware, software and technical services - will no longer be supported by Google devices and services, bar those publicly available.

Google said it was “complying with the order and reviewing the implications.”

A spokesperson for Google confirmed to Reuters that holders of current Huawei smartphones with Google apps will be able to continue using the apps and download updates provided by the technology giant.

The source said: “Huawei will only be able to use the public version of Android and will not be able to get access to proprietary apps and services from Google.”

Various media outlets have reported that this is a blow to Huawei and its plans to be the number one smartphone brand by the end of 2020. However, Huawei founder Ren Zhengfei has been defiant against the block.

Ren told South China Morning Post that no country could catch up to its intelligence and development of 5G technology.

He said: “The current practice of US politicians underestimates our strength.”

Last week, US President Trump signed an executive order requiring the sale of technology to foreign telecommunication companies to be approved in advance by the US government.

Trump declared: “A national emergency with respect to this threat.”

The blacklist will impact Huawei’s trade with immediate restrictions for business with its US counterparts, although speculation remains high around the longevity of the Chinese manufacturers ban.

Huawei leads the ownership of technology patents, ranked 16th in US patents approved in 2018 which was four places higher than the year before.

Ren added that the company is “fully prepared” for a clash with the US which he explained would become inevitable as it continues to strive to be the global leader of technology.

He said: “We sacrificed [the interests of] individuals and families for the sake of an ideal, to stand at the top of the world.

“For this ideal, there will be conflict with the United States sooner or later.”

The US Commerce Department announced yesterday it would loosen restrictions on Huawei for 90 days, which would allow the Chinese telecommunications giant to temporarily maintain existing networks and provide software updates on its current smartphones.