The UK broadcasting TV business model has seen little disruption over the past 25 years, pivoting around two pillars – free-to-air and paid content, but that is “fundamentally changing” according to the Chief Executive of Arqiva.

Arqiva boss Simon Beresford-Wylie addressed delegates at the Digital Television Group (DTG) Summit in London where he shared his prediction for a future that hinges on hybrid delivery models, stating that “convergence is really truly upon us this time.

“The new way, which we believe will be the main way in which TV will be consumed, will consist of a compelling free-to-air base, enhanced by a rich choice of IP services delivered over-the-top (OTT),” Beresford-Wylie said. 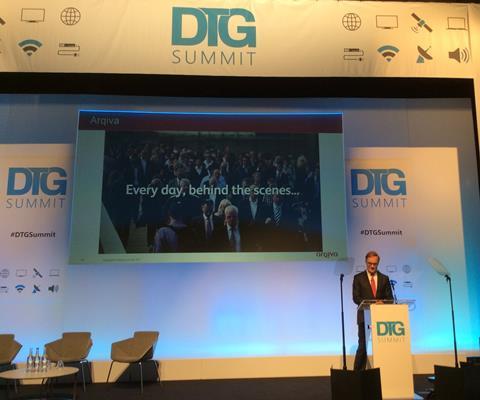 The cultural role and importance of TV should not be underestimated, Beresford-Wylie explained, with linear TV viewing representing 80% of all viewers with the average viewing time not changing over the past 20 years.

“The coming together of traditional free-to-air and OTT services raises an interesting question around the old pay TV model. Perhaps with the exception of premium sports it’s not hard to imagine a future where many viewers needs will be met by a high quality universally available free-to-air service, augmented by a rich array of OTT services,” Beresford-Wylie said.

It’s no surprise the DTT is using hybrid models to do the “heavy lifting”, he said: “We know viewers have an insatiable appetite for content that extends to broadcast, video on demand (VOD), and subscription video on demand (SVOD) services.”

“These products point to a bright future for the DTT platform and demonstrate what can be achieved and reinforce the benefits we’ve had from successful collaborations across the industry.”

Like the internet, 5G will be the “catalyst for transformative change, re-defining work processes and re-writing the rules of competitive advantages” Beresford-Wylie said.

Whilst 5G has not yet achieved the GPT (general purpose technologies) status, like the internet has, it’s sure to have a “major socio-economic mainstream impact” according to Beresford-Wylie.

“The future will be about hybrid delivery models with DTT and IP coexisting and complementing each other. As a consequence of this we think it is absolutely crucial that the UK is at the forefront when it comes to the deployment and adoption of 5G,” Beresford-Wylie said.

“We are in a globally competitive fight, and China, in 2012 their premises pass was at 28%, over the last four years they’ve increased that to 78%. The Chinese government and Chinese telecoms operators are future-proofing their country. Fibre is crucial not just for households and businesses but also for telco infrastructure,” Beresford-Wylie said.

”We are at the start of the 5G journey and it’s a very exciting future.”

The UK must invest in the infrastructure and services to be a leader in 5G.

He said: “A growing demand of hybrid, free-to-air pay light offerings bright and long term future for the DTT platform. We believe that the arrival of 5G will bring with it the attention that the UK wants, to be a forefront of the mobile revolution rather than being away from the markets.”

The UK’s government Autumn statement announced that £740 million will be invested in the trials of 5G, providing changes to infrastructure, planning and legislation.

5G for the future

Arqiva will particpate in the UK 5G trials in London during 2017, in partnership with Samsung Electronics. The trial will feature ultra high connectivity to multiple devices whilst using the same 28 GHz band spectrum used for 5G implementation trials in Japan, the USA and South Korea.

Samsung’s 5G access units (base stations) will use high-frequency mmWave (millimeter wave) spectrum and advanced technologies such as beam-forming, to provide high-density coverage and ultra-high-bandwidth connectivity to CPEs (or customer premise equipment) installed in nearby locations.

These can be self-installed, therefore limiting costs, and can bring a subscriber online in a matter of minutes. This gives 5G fixed wireless access (FWA) considerable advantages over comparable FTTH or FTTB (fibre-to-the-home/building) deployments in terms of service rollout times and the costs to both the service provider and the subscriber.

“We expect to be able to showcase a range of applications including 4K video, augmented reality applications and identifying the technical challenges in terms of the deployment we need to address,” Beresford-Wylie said.

”It will appear in its first form at the start of 2018, as a wireless alternative to fixed broadband,” Beresford-Wylie said.

How is it going to be used?

Beresford-Wylie said: ”Momentum is gathering to some success and the government has recognised the role 5G will play in underpinning the UK’s competitive digital economy and has taken steps – a recent national infrastructure report showed that the UK was falling behind.”

Recommendations from the report: