Selected highlights from the Future Zone, one of the most vibrant sections of IBC2017. 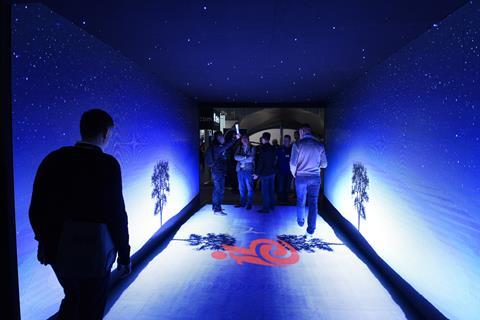 Without doubt one of the most interesting and awe-inspiring areas of IBC2017, the Future Zone has risen to new heights for IBC’s 50th anniversary.

Designed around a dual theme of night and day, the centrepiece element - the IBC Future Zone Smart AV tunnel – drew a crowd from the very start.

Designed and built in partnership with Smart AV, the tunnel is built entirely from LED displays, including the floor, which is guaranteed to induce vertigo with a realistic recreation of a ‘bird’s eye’ view of a city – agoraphobics beware.

On stand 8.G01 is NHK, the only public broadcaster in Japan, with an impressive ultra-thin, 8K UHD OLED display in a setup they have dubbed the 8K living room.

Video Inside the Future Zone

A bewilderingly thin 2mm 130inch screen is made up of four 65in panels is matched with a 22.2 multichannel sound system consisting of 24 separate speakers.

A spokesman for NHK said that while the technology is cutting edge “there will be commercial deployments in Japan in 2018”, and confirmed that UHD 4/8K satellite broadcast technologies will be ready to screen the Tokyo Olympics in 2020. The company began UHDTV research and development in 1995.

Meanwhile, BBC R&D is showcasing a wide range of projects - five in total - with the big focus on IP production methods and technologies and object-based broadcasting.

One section explains the considerable complexities of live IP production in the cloud and protocols for creating object-based media at scale; another live end-to-end object-based audio; there’s a speech-to-text as a production-ready demo; a section covering atomised media, which has been trialling new ways of presenting news stories for young audiences, and finally innovations from the BBC’s VR lab launched in April 2017.

A spokesperson for BBC R&D explained that the cloud-based IP video system has numerous advantages for a broadcaster.

“The major benefit here over fixed infrastructure is flexibility and scalability.

“If I wanted to start up a new session, and start a new production, new distribution, to a new audience with fixed infrastructure that’s hard to do, I’d have to buy in machines, install software, etc, but in the cloud that’s simply not an issue.

“I can spin up a new channel and production environment in literally minutes.

“Production tooling is very lightweight too, it just runs on the browser, from any connected computer on the planet.

This is currently based on Amazon Web Services, but we’ve spent a lot of time making this as agnostic as possible.

“We’ve been doing a lot of standardisation work over the last few years to build a consistent approach, from camera to potential on-premise environment to cloud.”

One of the most obvious structures in the Future Lounge is an igloo, fittingly housing a company called Igloovision.

The company provides temporary structures used to display 360-degree video to large audiences, with spaces ranging from capacities of 1 person up to 900.

Jessica Cooper, Business Development at Igloovision said: “The domes have proven particularly popular with the motoring industry, with customers including Toyota, Nissan and Hyundai. Our range provides a great alternative to VR headsets for larger events.”

The company is also demoing 3D audio for VR, Real-time SDR-HDR conversion and video compression in a 5G context.

Just across the floor is Generic Robotics, exhibiting innovations in VR haptics, essentially enabling users to touch and manipulate objects in VR environments.

Delegates can test their own reflexes by attaching robotic devices to finger and thumb and handling a tray of items, including a Rubik’s cube and a Coke can, as well as experience providing an injection to a virtual patient on a second machine designed for medical training.

“Dentistry is just one of the potential training applications for this technology - at the moment, dentistry students have to practice injections on each other, and this means that the learning environment will be much safer.

“Of course, we can manipulate any element of the environment to suit the training scenario.”

The medical simulators can be easily reconfigured by swapping out different tools and learning content, according to the company.