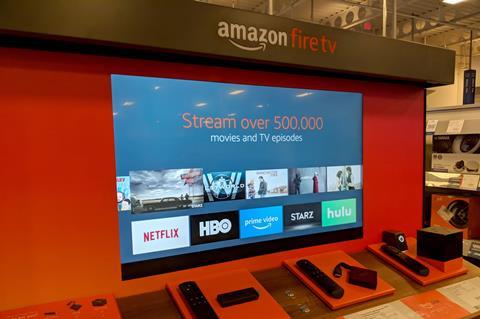 Amazon’s Fire TV might not carry the new Disney+ service as the two corporate behemoths are locked in a dispute over the terms of advertising.

Amazon and Walt Disney have not yet agreed on the terms for Amazon’s Fire TV to carry the entertainment giant’s app on its device and is the latest power struggle emerging from the streaming world.

The dispute is a result of Amazon wanting the right to sell a “substantial percentage of the ad space on Disney apps,” according to a report by The Wall Street Journal, but Disney is resisting.

If Disney and Amazon do not agree over the advertising space, the company could also possibly see a number of its apps removed from Fire TV, including sports streaming service ESPN+.

As Disney readies its entry into the direct-to-consumer (D2C) streaming video market next month in a move to compete with giants like Netflix, the WSJ said it is crucial to be on Fire TV, which is the second-largest distributor of streaming apps.

Conflicts between Amazon and other companies, including Apple and Google, have kept other popular apps from being carried on Fire TV, including YouTube - a dispute that was resolved earlier this year. Prior to this, Amazon did not carry the app, and Google didn’t offer Chromecast users the ability to connect to Amazon Prime Video.

According to reports, Amazon usually starts out asking for around 40% of the ad inventory from programmers and negotiations often bring it down from there.

However, well-known apps have leverage and Disney believes its popular apps and the coming launch of Disney+ give it clout.

Recently, the two sides have discussed a proposal in which Disney would give up 10% of its ad inventory, according to sources cited by the WSJ.

Earlier this week, Amazon Prime licensed a selection of Disney titles to exclusively stream in Latin America in line with the first slate of territories where Disney+ will roll out next month.

The deal is set to run for one year, starting from 1 October 2019 to September 2020, which is when Disney plans to launch its direct-to-consumer (D2C) service - Disney+ - in Latin America territories, starting in the first quarter of 2021.