Announcing its fiscal first quarter results for 2019 yesterday, Apple boss Tim Cook spoke of the “huge changes in customer behaviour” that will drive Apple’s strategy for the years ahead. 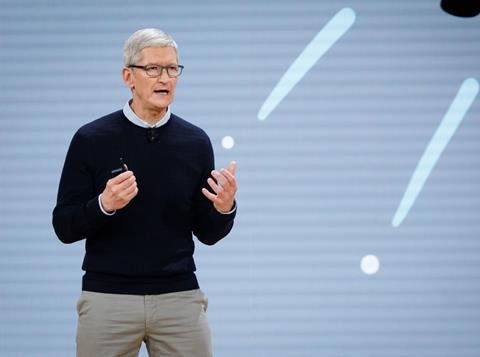 Chief executive Tim Cook declared an optimistic future for Apple, despite a decline in revenue and “diluted” quarterly earnings.

Cook told analysts that whilst he was disappointed to miss the revenue target, “this quarter’s results demonstrate that the underlying strength of our business runs deep and wide”.

He said: “We see huge changes in customer behaviour taking place now and we think it will accelerate as the year goes by, to the breakdown of the cable bundle talked about for years.

“I think it will likely take place at a much faster pace this year.”

Cook spoke about Apple selling third-party subscription content through its Apple TV service based on the changing viewing habits of audiences and become a buyer of individual services in favour of channel bundles.

He added: “We’re going to participate in that in a variety of ways,” pointing to, Apple TV and AirPlay 2 with support from a number of third-party television providers.

“We are excited about that, it makes the experience of a living room with people using our products even better, we think people are really going to like that.”

Earlier this month Apple allowed its iTunes service to work on Samsung televisions, despite its previous firm approach refusing to enable its software to function on other companies’ hardware.

The move is important for Apple to continue to grow its revenues particularly with news of its iPhone sales declining globally; Cook justified the decline in a separate statement said all of Apple’s devices have been designed and built to last.

The Telegraph reported, the decision for Apple to expand in to original content and host a streaming service has come as the technology company prepares to launch its streaming service later this year with $1 billion worth of new content.

Cook elaborated on its plans to expand in the video market, mainly through the Apple App Store, he said: “We are participating in this today and I would guess that will accelerate into the future as the bundle breaks down and people begin to buy likely multiple services in place of their current cable bundle.”

Cook explained Apple’s plans for “original content” he commented that while they are not yet ready to reveal specific content plans, he said: “We’ve hired some great people that I have a super amount of confidence in and they’re working really hard and we’ll have more on that later.”

Cook declined to confirm any plans or reveal details regarding its streaming service.

According to reports, the launch could be around mid-April. Bloomberg reported last May of Apple’s move to start selling third-party subscriptions to services like HBO, NBC League Pass, Starz, and others through its TV app in 2019, similar to Amazon’s offering.

Revenue from iPhone declined 15% from the prior year, while total revenue from all other products and services grew 19%.

Services revenue reached an all-time high of $10.9 billion, up 19% over the prior year. Revenue from Mac and Wearables, Home and Accessories also reached all-time highs, growing 9% and 33%, respectively, and revenue from iPad grew 17%.

“We returned over $13 billion to our investors during the quarter through dividends and share repurchases. Our net cash balance was $130 billion at the end of the quarter, and we continue to target a net cash neutral position over time.”