Apple has launched Apple TV+, a subscription streaming service that will include original content and be available via the firm’s overhauled Apple TV app.

Billed by the Cupertino-headquartered company as “the new home for the world’s most creative storytellers”, the launch event for Apple TV+ included appearances by Steven Spielberg, Oprah Winfrey, Jennifer Aniston, Reese Witherspoon and Steve Carrell who all spoke about programmes they are creating for the streaming service. 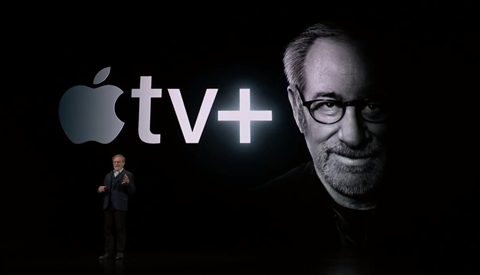 Apple TV+ is due to be available in the autumn when pricing for the service will also be announced.

The overhauled Apple TV app, which will be available from May, will aggregate channels a from the likes of HBO, Starz, Showtime, CBS All Access, Smithsonian Channel, Epix, Tastemade, Noggin and MTV Hits.

As well as being available on the iPhone, iPad, Apple TV and now the Mac, the Apple TV app will also be rolled out to smart TVs from Samsung, Sony, LG and Vizio.

Apple said viewers will be able to subscribe to Apple TV channels “à la carte and watch them in the Apple TV app, with no additional apps, accounts or passwords required”.

The app will use machine learning to offer suggestions for shows and movies from over 150 streaming apps, including Amazon Prime and Hulu, as well as pay-TV services such as Canal+, Charter Spectrum, Directv Now and PlayStation Vue.

According to reports Apple is set to spend $1 billion on content this year.

Apple’s new shows, which it unveiled during the press conference, include two documentary series from Oprah Winfrey on mental health and sexual harassment in the workplace (which has a working title Toxic Labor)  as well as a live broadcast for her book club format. 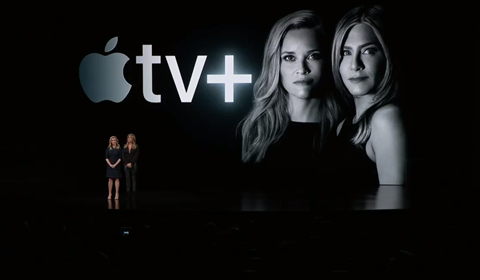 The Morning Show, starring Jennifer Aniston, Reese Witherspoon and Steve Carell, is a drama that will ”look at relationships between women and men in the workplace,” according to Aniston.

An anthology series inspired by true stories of immigrants in the US called Little America is being developed by Kumail Nanjiani and Emily Gordon. And Helpsters will focus on coding and programming for young children.

Tech, media and telco analyst Paolo Pescatore said: “This represents a landmark moment for Apple with a major event solely focussed on services.

“The stronger revamped video service somewhat mirrors the strategy of rivals. These latest moves takes Apple TV closer to a one stop shop destination for consumers with live TV, on demand and Apple’s own original shows in one place.

“The new Apple TV+ promises to reinvent TV with great storytelling. Strong endorsement among key talent is impressive and will allow Apple to connect with viewers.

“It is a great time to be a content and owner. The value is firmly in great storytelling.”

Disney has also announced it will launch a video streaming service later this year with a library that also now includes assets from 21st Century Fox.

He said: “With more than 20 million Apple TV owners worldwide, who have demonstrated an insatiable appetite for content and a high capacity for entertainment spend, there’s a ready-made loyal audience just waiting to switch on.

“There’s also an opportunity here for Apple to become a content super aggregator, similar to how Amazon is carving out the landscape with Amazon Channels.”

The event focussed on Apple’s push to digital services and the new streaming service announced as “the new home for the world’s most creative storytellers.”