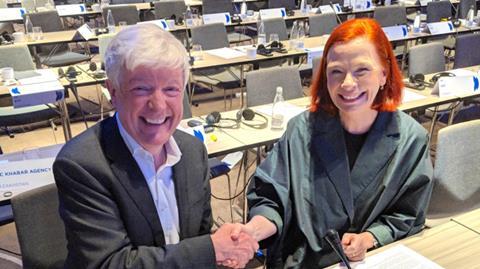 Canadian and British broadcasters have confirmed a creative co-production partnership in a commitment to future collaboration across drama, documentaries and news content.

The agreement was made between the BBC director general Tony Hall and CBC/Radio-Canada president and chief executive Catherine Tait in the latest move to fight back against the global streaming video-on-demand (SVOD) platforms.

The two broadcasters announced the deal during the 82nd General Assembly of the European Broadcasting Union in Oslo last week.

In a joint statement, Hall and Tait said: “In an increasingly global marketplace, Canadian and British audiences want programmes and services about their lives and their culture. In divided times, it’s never been more important to reflect and represent every part of our diverse communities.

“And in a world where disinformation spreads in a flash, we need public media to bring the whole of society the news and analysis that it can trust - what is really going on and why it matters.”

CBC and the BBC have a shared history with a united mission to inform, educate and entertain audiences.

The executives announced the partnership was developed to benefit modern story-telling with its public service broadcaster values and ongoing collaboration aimed to enhance the services and programmes.

Hall and Tait said: “As we reinvent how we deliver our services for new generations, we are coming together to share ideas, and our teams are exploring new ways to work together: amplifying our public service missions, bringing our audiences the best ideas, and investing in our local creative industries.

“Through this partnership, we will bring the best stories to audiences across the UK and Canada, and around the world.”

The broadcasters have previously co-produced projects before including documentaries such as Humble Bee Films and Infield Fly Productions’ Jumbo: The Life Of An Elephant Superstar and Talesmith and Cineflix’s wildlife doc Takaya: Lone Wolf.

Hall and Tait added: “Together we are already sharing ideas and cooperating around engaging young audiences, fact-checking to help tackle disinformation, content including news coverage, new technology, and making our organisation fantastic places to work - reflecting our diverse audiences on and off-screen, supporting emerging talent from all around our countries, and pursuing environmentally sound production.”