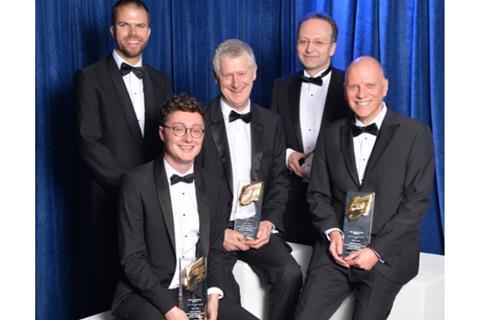 Netflix, BBC, C4 and HBO are among the network winners for the 2019 Royal Television Society (RTS) Craft and Design Awards.

The RTS Craft and Design Awards celebrate excellence in broadcast television, aiming to recognise the huge variety of skills and processes involved in programme production with winners recognised across 30 categories.

The Lifetime Achievement award was presented to Mike McCarthy, who was recognised for his ”incredible ongoing career, from working as staff at the BBC at the dawn of Television Centre’s construction, to many years since as an incredibly popular freelancer, witnessing, and surviving, many changes within the industry.”

RTS Special Award was awarded to Sky Adsmart for ”the ground-breaking work they are doing not only here in the UK but leading the way globally.”

RTS Craft and Design Awards chair Lee Connolly said: “We are constantly inspired and impressed with the incredible talent on display in our industry, and we are proud to honour the crafts people who make these shows possible – dedicating their time, energy and creativity to make some of the most impactful programming of the past year.”

The full list of winners and nominees, as well as the jury’s comments on each winner:

The winning programme was unforgettable in its unflinching attention to detail and perfect characterization, a total immersive, cinematic experience. We felt as an audience that everything worn had come out of 1980s Belarus, Ukraine and Moscow. It was totally cohesive and the collaboration between departments quite extraordinary, with perfect attention to detail, heightening the sense of terror and horrifying reality.

The winning design created characters that were believable, realistic and appealing, without falling into the trap of caricature. Wonderful attention to detail and subtlety was developed throughout the series.

Striking, emotive and artistically ambitious these beautifully designed and executed animations are impactful and moving. They are devastatingly effective, conveying upsetting events in a sensitive and beautiful way. They successfully combine different source materials into one coherent and consistent yet very unique style.

In this Netflix age of ‘skip intro’ this sequence redefines programme titles. A clever idea beautifully executed, with bold typography and punchy colours, perfectly reflecting the chilling nature of the programme. It sustains repeated viewing and leaves the viewer wanting more.

The media had a job to do to elevate the platform of women’s football, for the FIFA 2019 Women’s World Cup, and this campaign hit the message firmly on the head. Gutsy, modern, dynamic and, most importantly, memorable this well thought out campaign unapologetically placed women’s football centre stage.

The jury were hugely impressed by the innovative and unapologetic approach taken by this entry. Mining comedy from small moments and real environments, its limited budget did not hold it back from achieving a truly distinct and memorable style.

An invisible subject matter made visible in a powerful and emotionally engaging film which clearly evidenced sensitive and brave directing skills.

A different league! Said the Jury. It felt completely real and was head and shoulders above anything else.

The jury thought the very sympathetic direction wonderfully captured all the action to bring the audience a mesmorising experience. This was clearly extensively planned with nice refreshing camera moves expertly choreographed and overall well executed.

Innovative and brave. The breath-taking & wonderfully anarchic style of editing brought a 100 Year Old Subject instantaneously and convincingly into the 21st century. The heady mix of juxtaposed dancing and art images with talking heads and dramatic interludes, was immediately engaging and articulated a brilliant reconstruction of a wayward life with élan. The editing displayed the real additional contribution that an exceptional editor can add to a director’s vision.

The jury admired the emotional power of the piece. At times it was hard to watch, for all the right reasons. It had great impact on the viewer. Much of this emotional effect the jury felt could be attributed to the editing. They particularly admired the use of flashback material at just the right points to hint at the reasons for the lead character’s actions. A superb, memorable piece of work.

The suspense and tempo of this fast-paced multi-camera reality sequence was a visual assault on the senses. A technically challenging edit with its numerous narrative arcs of multi-layered storytelling, action and jeopardy all creatively balanced to create a fast-paced thriller. The smooth yet complex weaving of all the strands together, lifted the editing talents above its contemporaries, demonstrating it to be the model of how to do this sort of thing without putting a step wrong.

The jury described this as great story-telling, classy, clever, ambitious and with brilliant shot selection.

WINNER - One Of Us The OA: Part II Plan B Entertainment for Netflix

The originality of thought, the attention to detail and the design aesthetic that went into the production of all the on-screen effects was hugely impressive.

Watching this felt like a true piece of art being crafted. The boldness of creative choices created a very special performance.

The best make up design was awarded to the programme, which was so painstakingly crafted, recreating appalling scenes of absolute horror and decay, without ever being gratuitous. Using a slight of hand and subtlety that sensitively portrayed the devastating tragedy. The work exhibited huge amounts of challenges, research and wonderful characterisation both before and after the disaster.

The winner had created characters and transformations that were daring and exciting. Consistently impressing audiences and fans, never failing to entertain and constantly exhibiting an amazingly, varied array of skills and techniques.

The jury felt the multicamera work and planning brought life to the subject matter. A very considered craft in how to achieve the stylised look.

Technically brilliant to see something of this scale delivered so well. Made the event enthralling to watch and exciting to follow.

A unanimous verdict, the jury felt the winning score was utterly unique, totally integral to the drama and, as a result, completely terrifying. The juxtaposition of textures that underscored the drama against the simple beauty of the Russian choir accompanying the closing montage demonstrated extraordinary imagination, versality and depth of understanding on the part of the composer.

Haunting, unsettling and atmospheric, this beautiful theme lent an ominous quality to the opening montage. The music somehow exaggerated the colours within the visuals and within seconds you knew something bad was going to happen. The music gave a Nordic Noir feel to Morecambe.

Capturing everyday life in a northern town, the strikingly executed photography subverts expectations by giving the town and its characters an evocative cinematic flair.

The panel were unanimous in their opinion that the cinematographer had done great service to the drama with their revolutionary approach to lenses and filming techniques that made this drama immediate, powerful and totally authentic.

Working within a modest budget and without having any previous experience of delivering in the broadcasters chosen format of HDR (High Dynamic Range). The picture enhancement was a masterclass in measured grading, using multiple layers applied on a shot by shot basis to create moody, yet bold scenes, that popped with colour.

Rich, realistic, beautiful and horrible all at the same time. Astonishing research that was real, sensitive and with unmatched passion for design.

The jury were blown away by the intricate set changes and impressed by the versatility of the production design.

So brilliantly executed, that anyone tuning in halfway through could be forgiven for not realising that the original audio had been resynced to the actors miming. A incredible technical feat that would require great time and skill in both production and post.

Over the course of TV history there have been many significant technological milestones, but very few led by an advertising development. From Gibbs SR toothpaste, the first ever TV commercial, TV ads have retained their unrivalled position in marketing, one that we are reminded of more than ever this time of year. ‘As Seen on TV’ became seen as a stamp of approval and trust – that you were big enough to be able to afford to advertise on TV. TV was the reserve of the big spenders and was too expensive, broad and wasteful for everyone else.

But what was originally planned as a project to deliver relevant promos, evolved into a 7 year, £100m project that fundamentally changed TV advertising for good.

In 2014 Sky launched its addressable TV platform – and in the last 5 years has gone-on to transform who and how TV advertising can be used. A major technical achievement able to seamlessly, with frame by frame accuracy, replace ads in live linear content across millions of homes simultaneously based of almost unlimited audience and location attributes. Effectively turning set-top- boxes into local ad servers, this massively complex project would level the playing-field without anyone really noticing.

Addressable TV has democratised the advertising landscape. This year Sky released the collective findings from nearly 20,000 campaigns - from reducing channel switching in ad breaks by nearly half, increasing ad engagement & enjoyment by a third, and with 70% of brands using the platform ‘new to TV’ it’s delivered on its promise to make TV advertising available to businesses of all shapes and sizes. And attracting new money into TV the virtuous circle of investment means more money into producing world class UK content and shows.

Not only Is this ground-breaking in the UK but leading the way globally – Comcast, Sky’s new owner have now adopted the AdSmart brand and it’s recently been announced both Channel 4 and BBC will be using the technology too.

The winner of this year’s Lifetime Achievement award has an incredible ongoing career, from working as staff at the BBC at the dawn of Television Centre’s construction, to many years since as an incredibly popular freelancer, witnessing, and surviving, many changes within the industry.

It is a career that has spanned 6 decades, the list of incredible shows he has helped bring to life is endless and many of you in this room will have worked with him, I guarantee all of you will have seen his work.

When we asked for a few lines from some of the people he has worked with, we were inundated. So much praise for his professionalism, for his willingness to make things work with the minimum fuss. They say He’s the best of the best, an absolute legend, the ultimate professional……..the Peter Pan of Sound Designers, and to this day, thankfully, he still has a hand on the sound of Saturday Night Television.