Oscar-nominated sound designer Julian Slater speaks about new ways of editing sound and why the term ‘immersive’ can be a red herring.

Julian Slater’s star was already rising before he set to work on Edgar Wright’s Baby Driver, but the high-octane soundtrack of the musical heist film shot his profile about as high as it gets for the ‘below-the-line’ craft of sound editing. 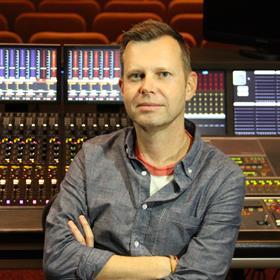 “For lots of people to pick up on the sound of a movie in this way is just amazing,” says Slater.

“It’s a career highlight for me. But I’m only as good as the director. They have to be open to new directions as much as I want to explore new directions.”

Slater’s already impressive career has seen him work on BBC TV drama Life on Mars, blockbusters such as Mad Max: Fury Road and for A-list filmmakers Tom Hooper (The Danish Girl), Martin McDonagh (In Bruges) and most famously collaborating on all Edgar Wright’s features.

“To run a team of other editors in order to give the director the sonic soundscape they envision and also the responsibility for controlling the budget.

“Sound designers on the other hand are generally tasked with creating weird and wonderful bespoke noises perhaps by manipulating completely unrelated sources.”

You might not think the doppler effect of a racing engine and a lion’s roar might go together but Slater combined both to form the unique sound of Baby’s car in Baby Driver.

“I discovered on Mad Max that just because you have a recording of the cars you actually see, they may not sound particularly great. In Baby Driver we used six different cars to compose one car’s sound.”

He explains that a re-recording mixer would traditionally prepare all the sounds required for a project some months before blending them in a final mix. “These days it’s a bit of a rolling process,” he says. “For Jumanji: Welcome to the Jungle I was mixing the sound FX while sound editing. A fair amount of this made it into the final picture.” 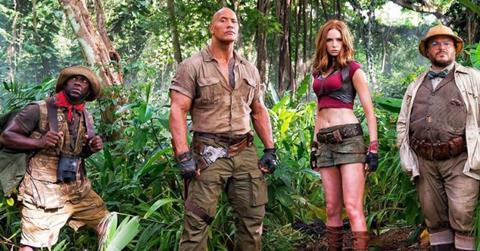 Jumanji: Welcome to the Jungle

For some projects Slater is the common thread throughout the process, asked for his input into selecting a production mixer on the shoot, ensuring everything required from principal photography is recorded, then coming in for the director’s cut and seeing it through to the finish.

He is just as happy performing the sole function of re-recording mixer, which he has just done for Emilio Estevez-directed feature The Public: “At least as soon as you pull your fingers away from the faders your job is done for the day,” he says. “If you’re supervising then there is always more prep to do.”

Just as important is the ability to dial into the vision of the show’s main creatives, the director and their editor. “You have to tap into that as soon as possible and do your best to service their concept. If you don’t, it’s not going to end well.”

Slater always knew he wanted to do something with sound. “Aged seven you couldn’t detach me from my Sony Walkman,” Slater recalls. “I’d tape [DJ] Tommy Vance doing the top 40 and then tape to tape record it again editing out his voice.”

It was the sight of a mixing console in the video for Police single Every Little Thing She Does Is Magic that set him thinking about audio production. A course at the School of Audio Engineering (now SAE Institute) in London included two-week work experience at music library DeWolfe. They were so impressed they offered him a position once he’d finished studying. He moved up from the transfer bay (“transferring a CD to 35mm or quart inch reel to DAT”) to the sound FX department, in the course of which he met Nigel Heath, co-founder of Hackenbacker Audio Post.

A year after joining the team in Soho, the company was dissolved but he and Heath became business partners and reformed the company trading as Hackenbacker Ltd. Slater was just 21. 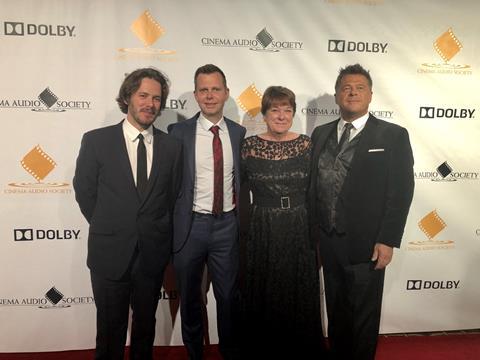 The sixteen years he spent there saw him handle TV projects like Animal Country (with zoologist Desmond Morris), a string of commercials and animated idents to feature films including two for avant-garde director Peter Greenaway (The Baby of Macon, The Pillow Book) then wider exposure for Mike Figgis’ Oscar nominated Leaving Las Vegas.

“The variety of things coming through gave me a really full education on different styles and workflows,” he says. “But it was really luck that I fell into TV and film rather than music. I’m glad because the budgets kind of fell out of big music studio recordings and picked up in movies.”

Working for Chris Morris on The Day Today and Brass Eye Slater gained a reputation for comedy which piqued Wright’s interest ahead of his debut feature Shaun of the Dead in 2004.

“Chris and Edgar are very similar in that they are very into sound and if it’s not right they will push you to get it right and then they go even further in another direction,” he says.

“Chris wrote a sketch about kids in the 1960s being sent to school to take as many drugs as possible in order to build their resistance up. He shot on 16mm film from which we took the audio file and spun it out to 16mm mag, we then pulled the mag off the machine and literally stomped around on it to put audio ‘drop outs’ in it to age it before turning it back into digital media. It was this cool, aged sound - just for one sketch.”

Similar attention to detail is evident in Baby Driver in which sound design, mix and music not only drive the score but also the characters and plot. Slater describes the effect as a “symphonic cacophony”.

He says: “We had to come up with new ways to edit the sound that I don’t think has been done to this degree before. Instead of timecode we were working in musical notation, in bars and beats.”

The opening sequence, for example, was syncopated to Bellbottoms, a track by The Jon Spencer Blues Explosion. Working in Avid Pro Tools, Slater took the sound of the police sirens and tempo-map each one to the music.

“Then we’d pitch-correct them. What that means is that in some places they sound musical and completely great but in other places, they sound totally unrealistic as a police siren. So, the sirens and every single sound in the movie is pitched up or down, to work with the piece of music it was up against. What you end up with are sounds that work both musically and cinematically. For me, that’s the crux of the sound challenge: if they didn’t work both ways, we don’t have them in the mix.”

Slater has yet to produce for the medium of virtual reality but thinks this could be the next cross-roads of storytelling and cinematic experience.

“I feel like the term immersive audio is a bit of red herring,” he says.

“I could put headphones on and watch a film on an iPad and still feel immersed. Any technology that helps push and pull an audience through a story is great, just as long as it doesn’t add a huge amount to your workflow. Good technology should tick both of those boxes – to enable the creative process not bog it down.”

Around 12 years ago he visited Los Angeles at the invitation of editor Carol Littleton (E.T: The Extra Terrestrial). “She showed me round the studios and I realised that the opportunities there were rather better than in London.”

So as soon as Marvel’s Ant Man was greenlit for Wright to direct in 2015 Slater jumped at the chance to relocate to LA. Although Wright’s take on the tiny super-hero ultimately failed to make it to the screen, it served its purpose for Slater who subsequently worked at Formosa Group and later at Technicolor on the Paramount lot in Hollywood before going freelance.

“If I can do it, anyone can do it,” he says. “I was sitting in the Cary Grant Theater [Sony Pictures recording stage] with Kevin O’Connell (veteran sound artist with credits stretching from The Empire Strikes Back to Top Gun] and pinching myself that a chap from a small town in Suffolk got here. I’d say to anyone who wants to work in sound, work hard and treat everyone around you with respect. I’m a believer in karma like that.”