The FA 96DNT, an optional Dante audio networking interface for the FA-9600 multi-purpose signal processor, is new from FOR-A. With its new I/O card, the FA-9600 is said to be the only video processor with integrated embed and de-embed support for 32 I/O channels of Dante audio. 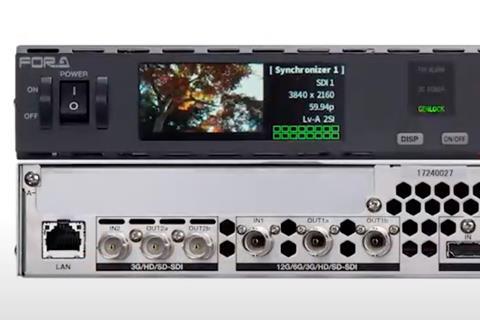 Available for pre-order, the FA-96DNT includes individual mapping to Dante output and gain adjustment for each channel. Its primary and secondary RJ45 terminals provide redundancy or daisy-chain connection; when there is a problem on the primary line, the FA-96DNT offers automatic changeover to the secondary line. When equipped with the FA-96DNT, the FA-9600 offers inter-conversion among Dante, AES, HDMI and SDI embedded audio sources.

“Developed by Audinate, Dante has become an industry standard for delivering multiple channels of lossless audio over a standard IP network,” explained Ken Truong, president of FOR-A. “With the new FA-96DNT, we can manage the most popular audio formats within a single FA-9600 unit.”