Scorpio, a 32-channel, 36-track portable mixer-recorder, is making its IBC debut and is the “most powerful product” so far designed by Sound Devices.

Launching earlier this year, the first production run of Scorpio sold out on the day of its announcement. 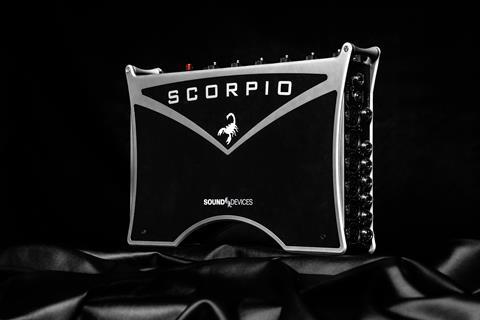 Compact: The mixer is equally at home over-the-shoulder or in a mobile rig

Scorpio sports 16 mic/line preamplifiers, 32 channels of Dante I/O, AES I/O, 12 analogue outputs and multiple headphone outputs. A fully customisable routing matrix enables sound professionals to send any input to any channel, bus, or output. Up to 12 buses may be individually mixed. Due to its compact form factor, the Scorpio is equally at home over-the-shoulder or in a mobile rig.

The Scorpio engine is comprised of three FPGA circuits with 64-bit data paths and six ARM processors to deliver the horsepower needed for complex tasks. The Scorpio also features Sound Devices’ latest and best in analogue microphone preamplifier design. These preamps have the smoothest sound and lowest noise of any preamp in the company’s 20-year history according to the company, and include built-in analogue limiters, high pass filters, delay, 3-band EQ and phantom power.