Studio Technologies has unveiled the enhanced Model 5422A Dante intercom audio engine. Like the original Model 5422, the new design is a high-performance solution for creating party-line intercom circuits when used with Dante-compatible products. 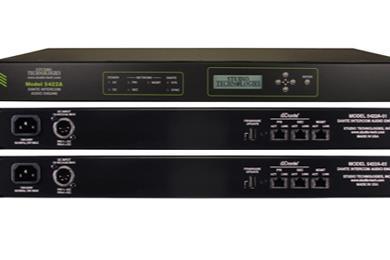 The Model 5422A uses Dante audio-over-Ethernet technology to support a variety of broadcast, production and related applications. In addition to creating ‘virtual’ party-line intercom circuits, the unit can provide many other Dante-based on-air, talent cueing (IFB), audio mixing and specialised interfacing resources. It features low-latency 32-bit digital processing and is available in two versions – one with 32 input and output channels, and the other with 64 input and output channels.

“With the Model 5422A, we’ve made significant improvements in both audio performance and application compatibility,” said Gordon Kapes, president of Studio Technologies. “With Auto Mix we feel that users will experience an increased level of satisfaction with party-line intercom audio. And larger or more sophisticated installations can benefit from the ability to maintain separate Dante audio and management networks. Finally, with support for firmware updates using a USB flash drive, a facility’s network security restrictions will no longer interfere with the ability to keep units up-to-date.”

The Auto Mix function helps to ensure that all party-line users contribute an equal audio level to an intercom channel. This enhances intelligibility and reduces listener fatigue. In addition to being part of the Model 5422A’s party-line capability, Auto Mix can also be used when using the unit’s audio mixing (summing) mode. The Model 5422A also features an audio control mode that allows multichannel switching functions to be easily implemented. High-frequency audio tones provide control of Dante audio input channels that are routed to normally-active and normally-inactive audio output channels.

The Model 5422A offers three Ethernet network connections as compared to the two provided by the Model 5422. Providing three independent GigE ports allows two to be designated for Dante redundancy while the third can be used to access the unit’s management port. This allows independent networks to support dual Dante audio paths and the unit’s monitoring and configuration web pages.

The ability to update a Model 5422A using a standard USB flash drive helps support personnel work successfully within the requirements imposed by contemporary installations. This is unlike the Model 5422 whose firmware update method utilises the file transfer protocol (FTP) method. Compatibility between Model 5422A and Model 5422 units ensures that applications can use a mixture of both units without issue.