Opened at the end of 2017, Media City Bergen (MCB) is the headquarters of the Norwegian Media Cluster and home to anchor tenants, Vizrt, Vimond, TV2 and NRK, a number of technology companies and startups, a Media Lab, and 220 students from the University of Bergen Media Studies Department. 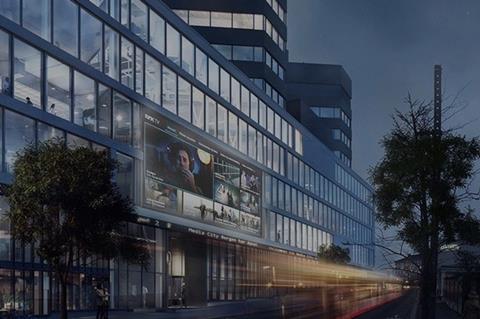 Media City Bergen and NCE Media Chief Executive Anne Jacobsen says: “The idea began four or five years back. We needed a co-location to enhance cooperation. You cannot do innovation by email – people need to meet to work together.

“We moved in last year. It’s been great,” she continues.

“It’s not only the planned activities, it’s also all the informal things – you meet people in the restaurants and walking around. And there’s the 200 students in the mix as well.

“The University of Bergen was the first to move in,” adds Jacobsen, “[It was] followed by Vizrt and a lot of the other cluster companies, then the Media Lab and Startup Labs were established. The studios came online in October and November. Later, IBM moved in and finally Deloitte Digital moved in last week.”

Situated in the largest industrial park in Bergen, MCB is housed in a 45,000 sqm facility that was the former regional headquarters of DNB, Norway’s largest financial services company. “It took a couple of years to build the facility,” says Jacobsen. “The old building was totally renovated. The building is owned by Entra OPF Utvikling which works closely with the tenants to make sure the cluster has everything it needs at any given time. It’s not a prominent role, but they have done a very good job.”

Jacobsen says that apart from broadcasting, the core focus of the work at MCB is in visualisation, immersion and AR. “But there is also work being done in film production, game development, drones, IoT, and AI as well as journalism.” 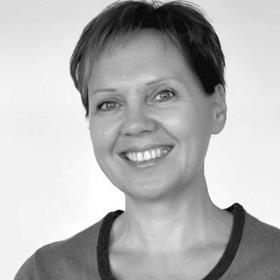 “When TV2 started, they really needed to do something different from NRK, who are really good at creating content,” says Jacobsen. “TV2 decided to compete in the areas of technology and graphics. For example, Vizrt began with a few guys from TV2 who were focussed on weather graphics.

“Additionally, TV2 was one of the first European broadcasters with programmes available online,” Jacobsen says, “The company Vimond was a spinout from this”. There has been around ten such ‘spinouts’ from Bergen over the past decade.

Broadcaster TV2’s operations are fully IP-based. It has an SDN core network for all live production and broadcast routing requirements, with multiple vendors providing a mix of standards-based native IP and existing baseband equipment. The MCB facility is connected via IP to another new all-IP facility located in Oslo allowing any control room to be used with any studio across both locations.

“The media cluster companies work very closely on a daily basis, mostly on the technology side,” she continues. “They are working on projects in AI, immersive graphics, how blockchain can be used in journalism, 360 video, VR. There is very high development activity here, with 82% of the companies launching new innovations every year.”

Building the MCB
The redevelopment of the 1980s building was carried out by Mad Artktitekture and real estate firm Entra OPF Utvikling at a cost of NOK 1billion.

Mad Arkitekter took an approach of adaptive reuse by maintaining the original form and character of the existing building. It gave significant attention to green operating procedures and managed to reduce the CO2 emissions by more than 6,242 tons, which corresponds to 48,000 flights between the Norwegian cities Oslo and Trondheim.

This resulted in an energy class certification change from E to B. The building’s large floor plan allows the mixing of open office space, studios, technical features and social meeting places. The project has also helped revitalise Bergen city centre, connecting to a city square that has been upgraded with new cover, lighting and furniture. The ground floor is a host to commercial spaces on street level.

Both facades and the octagon-shaped towers of MCB are a landmark for the city, and a massive digital screen is mounted on the exterior of the building.

The complex is also meant to connect with the general public; the internal atrium is intended to function as meeting place for the people of Bergen, with live broadcasts, debates and interviews, as well as for the building’s tenants.

The building also plays host to media industry conferences such as Vizrt Days and the newly launched mcb tech.18, a joint initiative between MCB, NCE Media and the newly established FinTech cluster in Bergen.

Common ground
“This environment has attracted a lot of startups,” adds Jacobsen. “Many of the people have worked in more than one of the companies, and this has helped to create a [growing] community based on trust and cooperation. Vimond and Vizrt have competitive products but they can still sit round the same table and work on new solutions together. We need to collaborate, the ecosystem and value chain all working together, otherwise Norway would be too small and too expensive.”

The Norwegian Media Cluster is made up of 100 members across Norway with MCB as the headquarters, hub, and heart. It has been awarded a Centre of Expertise status from Innovation Norway, and has its own cluster organization, NCE Media (Norwegian Center of Expertise in Media).

This organisation is run by five people who work solely to enhance innovation with the members. “They run workshops and seminars, help with funding, help start-ups with pitching,” says Jacobsen. “They work very broadly with the cluster to be its innovation engine. That way it makes it easier for things to happen.”

The NCE operates a Media Lab for testing and prototyping. “It [offers] three things,” explains Jacobsen. “First, a physical space of 500 sqm which our members can use for free for prototyping, testing and product developement. It’s fully staffed and facilitated for workshops. Members can also have seminars, breakfast meetings, and geek talks in the Media Lab.

”Second, it is a toolbox - the Bergen Media Platform, which is made up of open data, APIs and technical platforms from cluster companies and international tech partners.

”If you want to develop a third-party application that works with Vizrt for example, you can work with the lab to do that. We can provide a testing platform for all these environments. It makes your solutions part of the same value chain.

”We also have a collaboration with IBM’s Watson AI system [the lab is one of the IBM Watson test facilities]. Deloitte Digital and local bank Sparebanken Vest are also supporters of the Lab.

”Third, it is also a set of services offered to the members of the cluster. For example, to support companies who want to launch a product internationally, we work with the global network of Innovation Norway, as well as other Media Labs and accelerators around the world to provide a market introductory service. We can also help with funding and training. This is a great tool for the companies to drive innovation in a quicker and more streamlined way.”

Looking back at the first nine months in the facility, Jacobsen says: “It’s an open building – anyone can come in to have lunch or a meeting. And it’s opened up to other sectors in the city – seafood, oil, gas, and transportation, for example. Every industry today needs AI, visualisation, communication, and data visualisation. That’s a good and very positive thing that we didn’t fully understand beforehand. I expected that we would fuel innovation and the building would create activity, but it’s been even more substantial than I thought.”