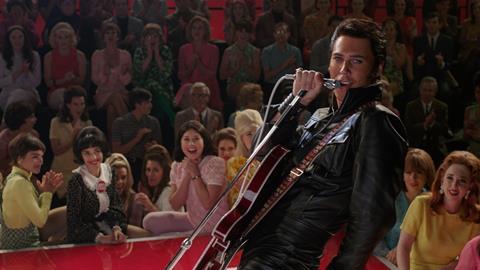 Behind the scenes: Baz Luhrmann’s Elvis

“He is an entertainer. Everything is made for audiences to experience larger than life,” Mandy Walker ACS ASC, the director of photography, is talking about Baz Luhrmann, the director of Strictly Ballroom, Moulin Rouge and Romeo + Juliet but Elvis is now in the building.

“The discussion I had with Baz really early on was about the emotion of Elvis’ journey which has incredible highs and deep lows. It’s at once epic and intimate,” Walker says. “We also wanted to portray the impact that Elvis had on American culture at different periods.” 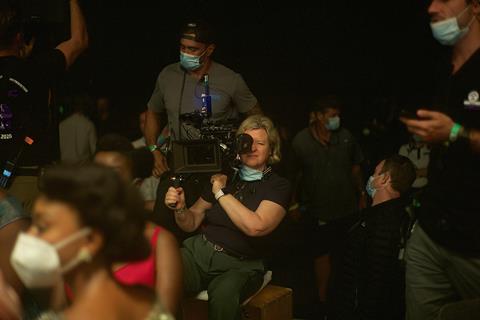 Luhrmann had been planning the biopic for a decade and compiled a reference book of images, documentary footage and home movies for production/costume designer Catherine Martin and fellow production designer Karen Murphy and Walker to draw on.

“The costume, colour palette and texture were very specific for every sequence. For instance, once Elvis got to Hollywood, he had this motorhome outfitted in red velvet and gold and shiny black so we used that as cues for colour tests.”

“Elvis is kind of the original superhero,” says director of photography Mandy Walker. “He rises so high, then finds his kryptonite and falls so low.”

Elvis is played by Austin Butler whose vocals are on the soundtrack (and recorded live for some scenes) in a story told through the prism of Tom Parker, Presley’s colourful manager-cum-promoter, played by Tom Hanks. 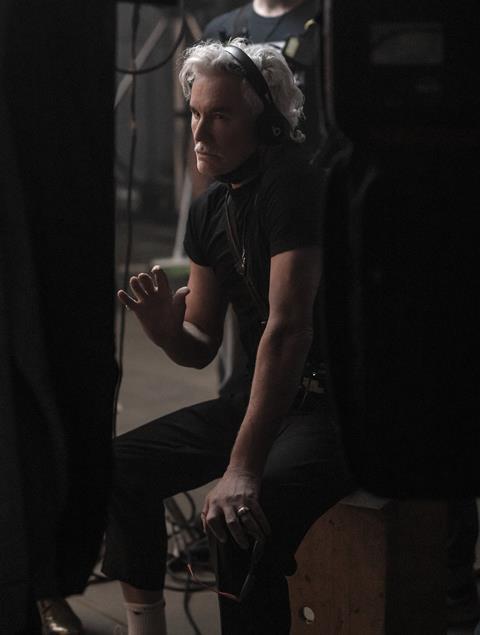 “A large chunk of the film is reality,” the director declared at CinemaCon in April, an event fittingly held in Las Vegas. “But there’s a touch of the film that’s a morphine dream from Tom Parker. Elvis is kind of the original superhero. He rises so high, then finds his kryptonite and falls so low and then a beautiful, powerful tragedy ensues.”

Getting to the emotion of a story

Walker, who previously lensed Luhrmann’s biopic of Australia (2008) joined the project in mid-2019 on the back of shooting Disney’s Mulan. She began by writing detailed notes as the director talked her through every scene.

“Baz is great at taking you to the emotion of the story. I knew when there’d be a dramatic moment or when we want to move the camera and be frenetic and chaotic.”

A scene set in the International Hotel, Las Vegas, where Elvis realises that he can’t rid himself of manager and Tom Parker, is particularly poignant. 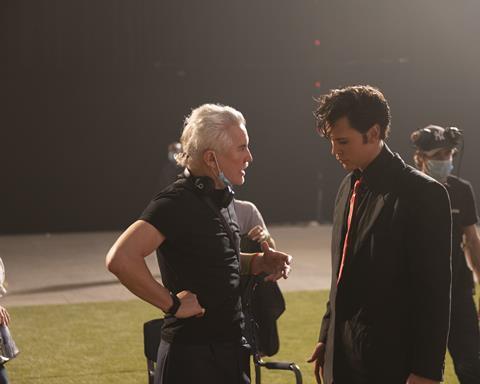 “We went really dark in that scene, the curtains are closed, it became almost black, until the light from the television comes on,” she tells IBC365. “Elvis watched television almost 24 hrs a day in this period. He had a TV with him wherever he went and would have it on multiple stations. That was one of the saddest moments in the movie. He’s been shut in, trapped in a cage.”

He can’t walk out, you want to say.

From Memphis to Las Vegas

The film arcs his childhood in Tupelo, Mississippi to his rise to stardom starting in Memphis and his conquering of Vegas, all of which was shot in Australia. Huge sets were built at Village Roadshow Studios near Brisbane for Tupelo and Shake Rag, an African American community in Tupelo where young Elvis discovers the blues and exteriors of Beale Street and Graceland in Memphis. Interiors including the International (later name changed to Hilton) on stage sets, about 80 of them in total. 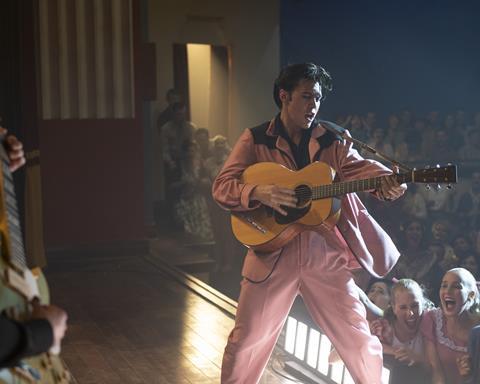 “Vegas and Memphis have changed so much there really is no Memphis or Vegas left from that period,” explains Walker of the reason not to travel to location. The same rationale was used by director Jane Campion and DP Ari Wegner to shoot The Power of the Dog in New Zealand rather than Montana.

The epic/intimate nature of the story leant itself to telling in the widescreen shallow depth of field 65mm format, mainly Alexa 65 and some high-speed shots on Alexa LF, running at least three and sometimes five cameras at a time.

Lenses were crucial with Walker choosing Spherical for the first half of the story in the ‘50s and ‘60s switching to anamorphic for 1970s’ Vegas. Specifically, these were Sphero 65s of the type originally used on Lawrence of Arabia and T series Anamorphic with 11:1 and 3:1 zooms and a 55mm Petzval.

“We went through three different series of lenses that Dan tweaked and tuned to end up with two full sets. We tested every iteration with costume and with mock-ups of sets. Baz is meticulous about testing and planning and that meant that by the time we came to shoot everyone was on the same page.”

The colour treatment in the film alters with the period. The Tupelo and Memphis sections are keyed into the evocative look of contemporary stills photographers Saul Leiter and Gordan Parks in particular. 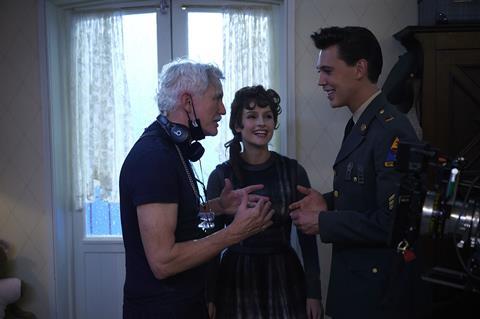 “Gordon Parks used to shoot with a very soft colour palette that shows some colours popping out and some fade. It’s like a hand-coloured look. We called it ‘black and white colour’ and thought that a good inspiration for the look of the poor neighbourhood where Elvis grew up.”

“It was important to Baz that we reproduce the concerts as Elvis had performed them, including the first two Vegas shows,” says Mandy Walker.

For the 50s and 60s eras, Walker leant into simulations of Kodachrome stock and then changed to a glitzier and more saturated feel for Vegas.

“By the time we got to Vegas we used T-series lenses that Dan had modified to make them less visually pristine. If left unmodified these lenses typically produce a horizontal blue flare but he changed the optics so that we saw other colours like magenta, green and sometimes yellow flares.”

“I’d go through dailies on set every night with the dailies colourist and tweak scenes and ensured there was a consistency of look across each era.”

In 1968 Presley made a televised concert aired by NBC to mark a return to live performance after seven years during which his career had centred on the film industry. Later known as the ‘Comeback Special’, it re-launched his singing career and is recreated in the film sometimes shot for shot.

“We actually did this for a lot of the concert scenes where we had doc footage available,” Walker says. “It was important to Baz that we reproduce the concerts as Elvis had performed them including the first two Vegas shows. Baz called these our ‘Trainspotting Scenes’, meaning that we’d be very particular about matching the lighting and camera angles, even down to the dimmer board operators who would change the lights to the music just as in the original. We studied this footage meticulously to reproduce the shots.” 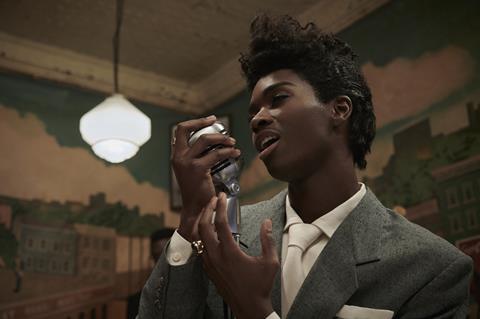 This included rounding up as many old rock and roll light sources they could find across Australia. They appear in shot for the earlier concert scenes (and where Elvis is at the Louisiana Hayride TV show wearing a pink suit) augmented with hidden fixtures like ARRI orbiters for better control of colour temp.

For the ’68 TV special they used TV studio lights with LEDs to fill in the shadows. In other scenes she placed Fresnals for a harsher light and 20k Mole Beams for directional light with softer more subtle edges. These were contrasted with the more dramatic scenes for which Walker and her Gaffer Shaun Conway used 8x8 LED softboxes.

Variety has called the film a “fizzy, delirious, impishly energized, compulsively watchable fever dream — a spangly pinwheel of a movie that converts the Elvis saga we all carry around in our heads into a lavishly staged biopic-as-pop-opera.” 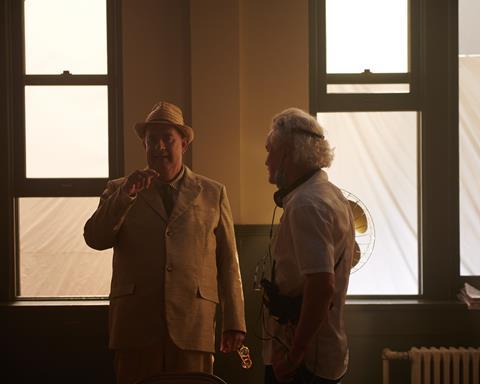 For such a high energy 159-minute montage you would think that work on set would be equally frenetic but not so according to Walker. Principal photography lasted 83 days, not extravagant for an $85m budget film. Even the split screen sequences were planned well in advance.

“The film has ended up looking just like we envisaged very early on,” she says. “I’d walk with Baz around the sets used for the Hilton ballroom and we’d talk about the approach to the sequence from every angle. Because of all the prep for visual language we all did everyone was in harmony with those ideas.”

Go behind the scenes of the best TV and film productions with IBC365. From Avatar 2 and Top Gun: Maverick to The Wimbledon Championships, browse the Behind The Scenes archive.