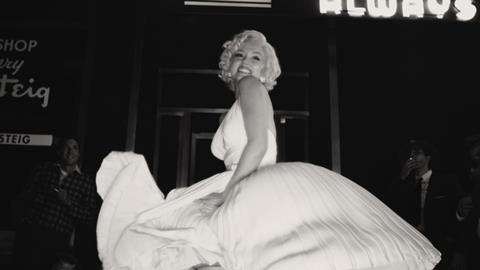 Behind The Scenes - Blonde

Cinematographer Chayse Irvin, ASC, CSC talks about the pleasure and the pain of shooting the story of Marilyn Monroe and the creative choices that shaped this powerful biopic.

The swirling kaleidoscope of a mind that perhaps never had a grip on reality is at the heart of Blonde, the new tour de force biopic of Marilyn Monroe produced by Brad Pitt’s company Plan B for Netflix. 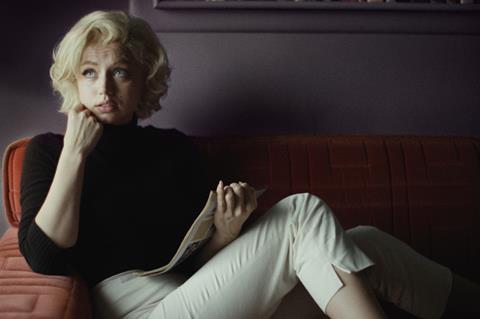 Blonde: the biopic of Marilyn Monroe

Writer director Andrew Dominik, who adapted the script from Joyce Carol Oates’ novel, calls it “a story of a person whose rational picture of the world [is] being overwhelmed by her unconscious.”

While the film restages Monroe iconography, Canadian cinematographer Chayse Irvin, ASC, CSC says he studied the star’s psychology rather than documentary and feature film footage and that this informed a lot of his creative choices.

“I remember Andrew saying in interviews before we’d shot anything that he wanted the film to be an onslaught of images and that really helped me key into his approach to Norma Jean’s story,” Irvin says. “He produced a 750-page document containing images from her life in story order. It started with images of Hollywood when Norma Jean is a little child in the 1930s and then we see images of the Hollywood hills on fire, then Monroe as a model pinup before film stardom.” 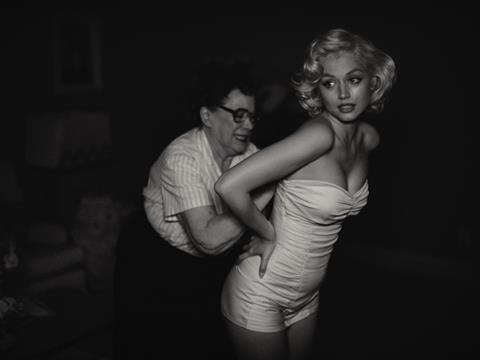 Blonde: Dominik, Director, wanted the film to be an onslaught of images

Many of these posters are meticulously recreated exactly down to the 1.33 aspect ratio that was favoured by stills photographers of the time. Irvin specifically relied on T1.0 50mm, a focal length often used in stills photos of the period which also had the effect of blurring the background.

Not a by-the-numbers biopic

Where the film departs radically from a by-the-numbers biopic is in the fluidity of the camera work and editing style that reflects Monroe’s increasingly chaotic inner-state (the result, the film suggests of childhood trauma and repeated failure to find a family in adult life).

“Andrew had a real understanding of what he was trying to do emotionally but he would take it multiple directions during a scene,” explains Irvin. “He was always searching. He didn’t necessarily know the answer. So, in one scene he might give a direction [to the actor] that is quite alienating and judgemental of that character, and in the next take he’d give another direction to the same actor saying the same dialogue but now the message is compassion. He would do this on almost every single scene.”

This meant that Irvin had to be ready to respond instinctively rather than slavishly adhering to a preconceived idea of what the film would be. 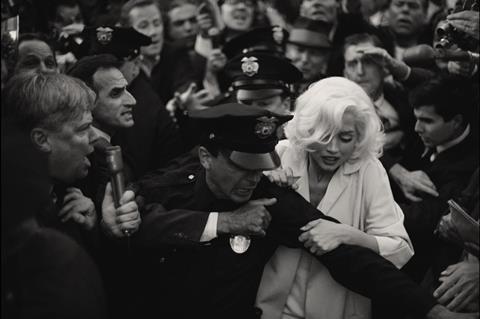 “Andrew and I never shot listed the film except for the first three days of preproduction,” he says. “He’d say something like ‘at the premiere I want the camera to attach to the car’. There was no discussion about close up or mid shots. My approach was to come up with a strategy that supported us to adapt to whatever would come up in the moment. So, we would shoot the scene one way but be able to shoot it differently the next take.”

The cinematographer’s feature work also includes the 2017 drama Hannah, as well as director Spike Lee’s Oscar-winning drama BlacKkKlansman, based on the true story of a black police officer who infiltrated the KKK.

He elaborates: “Sometimes working on a film, I feel I am speaking a message. But when you work this way it’s more like you are receiving. It’s like you have to access the vulnerability in yourself to be able to let go of thought, to admit that you don’t know the answers but to be alert enough to capture the moment.”

Irvin also describes the effect that they were trying to achieve as “a séance” – as if resurrecting Monroe’s spirit from the dead. That may sound hokey, but the filmmakers do seem to be on the same wavelength, since Blonde does conjure something peculiarly ethereal about a subject we think we know so much about.

Not so black and white

Irvin describes the look of the film – greys, whites, pastel shades – as “delicate” to reflect the character’s vulnerability as if she were “teetering on the edge of falling apart.”

“A lot of that fragility was created in mis en scene by production designer (Florencia Martin) and costume (Jennifer Johnson). We worked closely on set, testing different colours to see how the LUT would react.” 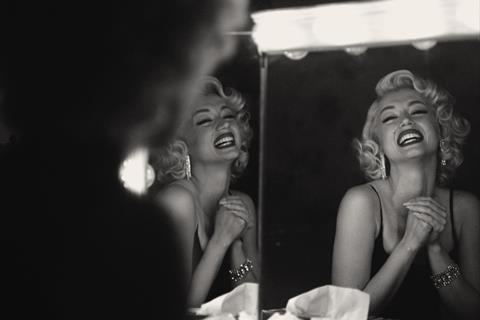 Blonde: most of the film is shot in black and white to reflect the character’s vulnerability

Much of the film is shot in black and white and for a period piece that ranges from the 1930s to the 1960s would seem an ideal vehicle for 35mm. Irvin initially thought so too but the need to shoot multiple takes made them pivot to digital. Multiple takes were in support of Dominik’s aesthetic approach to ‘finding the moment’ on set as well as supporting the lead performance of Ana de Amas who had a voice and dialect coach helping her convincingly portray Monroe’s breathy tones.

The final scenes of Marilyn’s death were shot in the actual apartment and bedroom where she had lived and died.

“Andrew asked for the Pepsi challenge. I basically staged multiple scenes with stand ins, my focus puller and DIT and shot Venice and Alexa XT in monochrome, day and night, interiors and a Technicolor scene.

“On the first test the winner was Alexa. On the next test it was the Sony. We couldn’t decide and each leant a different quality to certain scenes, so we used both.”

The Alexa XT has a modified sensor (no Bayer mask, optical low-pass filter, or IR block filter) and is capable of producing images that look much like 35mm panchromatic film. It was used to shoot infrared scenes, including one startling one in which Monroe appears to have a waking nightmare in her apartment surrounded by secret service agents. Irvin operates Steadicam in pitch dark following Monroe “who is blindly looking through the house and the camera illuminates the blood in her neck.”

There is no male hero

A repeated motif in the film likens Monroe to meat. Indeed, at one point she is manhandled by agents to the President’s bedroom. She says, “I’m meat being delivered. Am I room service?”

At one of her film premieres, the banks of braying fans and photographers outside have their mouths widened with VFX and slow motion.

“There was an ideology behind the extras who are mostly male,” Irvin says. “The idea was to show that men, from Marilyn’s point of view, were trying to devour her. The extras in the background are staring at her with aggression. They are dismissive of her as a person. They are ravenous.” 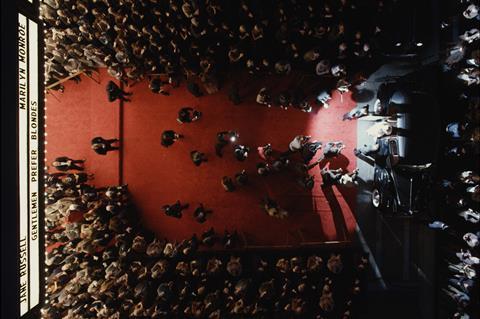 Blonde: a large amount of male extras were used to portray the agrgression and dismissivness of Marilyn Monroe as a person

He adds, “Andrew has done this before in films like Chopper or Killing Them Softly where the idea is that there is no male hero. He’s more interested in making men look like assholes.”

The film portrays Monroe’s descent into drink and drug addiction by blending several scenes into one another. She might be storming off stage of a film set one moment and waking up in her apartment the next, or falling asleep on a plane only to wake up and find herself in a cinema seat at one of her film premieres.

“We shot that at the same location where we were shooting the medical facility where Marilyn has an abortion, an abandoned place outside of LA with lot of offices and a big gymnasium. We built the plane in that gymnasium for which Flo had designed the interior and in the middle of shooting it Andrew said he want to segue the sequence into the movie theatre. We weren’t even sure if Flo would be able to do that in terms of resources and cost but she did. Turned out to be one of my favourite moments.”

The most painful part of the shoot

The final scenes of Marilyn’s death were shot in the actual apartment and bedroom where she had lived and died. It’s another instance where the filmmakers were instinctual rather than calculated.

“The whole crew paused and thought of her,” Irvin says. “This was the most painful part of the shoot. It was like we could feel her presence and how she must have been grieving (for the loss of another child) at that time before her death.”

After all the film’s stylistic flourishes, the final shots are quiet and simple. 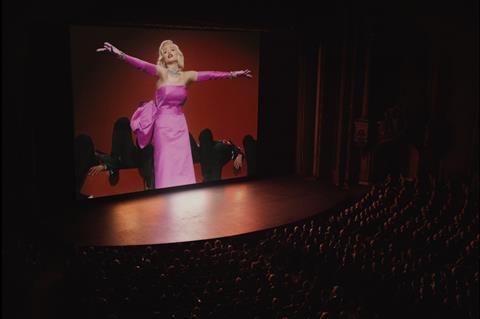 Blonde: the final shots are quiet and simple

“Originally Andrew had wanted the camera to ‘walk out the door of the house’ but it didn’t seem as interesting when we shot it live,” Irvin explains.

“The dog in the scene is called Elvis and it’s Ana’s own dog. At one point it got onto the bed as if protecting Ana. I started shooting then walking away from Elvis to come around to the side of the bed. I put the camera on the ground, waved to my DIT to come closer with the Cinefade and slowly we dialled it down and down until Andrew called Cut. That’s the ending we used.”

For more interviews and insight into the making of the world’s best TV and film productions, check out IBC365’s Behind The Scenes archive.