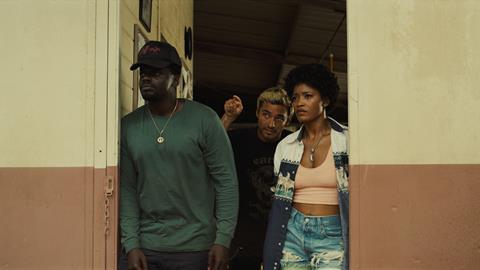 The working title for Jordan Peele’s new movie was Little Green Men. This nods to the film’s close encounter with a UFO and the central character’s quest to capture undeniable proof of aliens on camera - the money shot they can sell to Oprah. 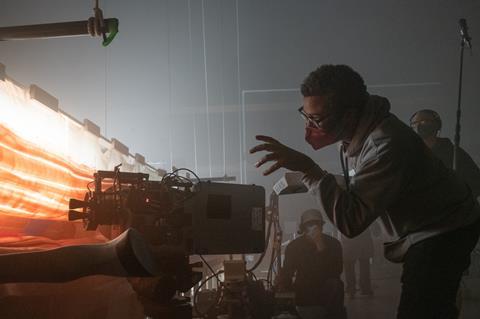 Writer/producer/director Jordan Peele on the set of Nope

But it’s also about society’s troubling relationship with the ‘other’.

“This is really about all kinds of spectacle from media celebrity and fame to the kind of deeply disturbing psychological spectacle that sticks in your mind,” says Nope’s editor Nicholas Monsour who cut the director’s previous satire US.

“Jordan’s films always have an analysis of power and a critique of society running through them,” he tells IBC365. “The dynamic in this story is we have Black owners of a horse stunt training ranch seeking fame and recognition in [white dominated] Hollywood so there is this inherent ‘us’ and ‘them’. Then we’re extrapolating that to humankind and whatever else is out there. What’s the power dynamic then? To me, that’s the big theme.”

Peele is certainly making a movie for cinefiles like himself who want to make cinema for theatres to celebrate the big screen experience which for Peele range from The Wizard of Oz to Alien and Point Break. 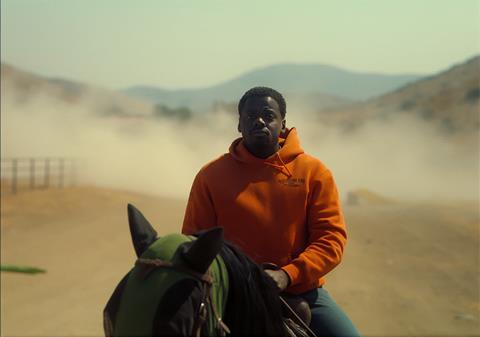 Nope is filmed in large-format 65mm and IMAX and given a Western style location in Southern California’s arid and rambling Santa Clarita Valley.

“The other part of the equation is that we foreground characters that have not traditionally been in movies of this scale of pop cultural spectacle,” says Monsour.

Daniel Kaluuya plays OJ and Keke Palmer is Emerald, siblings who own the Haywood ranch and, as the film makes explicit, are direct descendants of the very first film star. 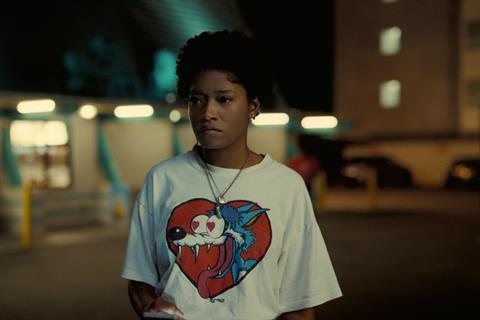 “Did you know that the very first assembly of photographs to create a motion picture was a two second clip of a black man on a horse,” explains Emerald in the movie. “Since the moment motion pictures could move we had skin in the game.”

“You don’t have to be a cinefile or an intellectual to be involved in the story,” says Nicholas Monsour.

Yet Black talent has been excluded from the movie making industry until very recently. That idea is encapsulated in a famous series of 16 sequential photographs depicting a Black jockey on a horse, shown in the film. Created by Eadweard Muybridge in 1887, the loop of cards, known as Animal Locomotion, Plate 626, is one of the earliest examples of chronophotography, which established the foundation for what would become the bedrock of the entire film industry. 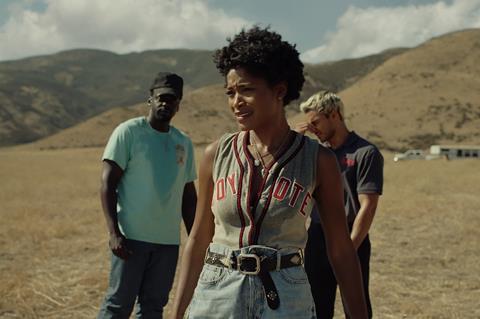 While we know the name of the horse (a mare called Annie G) the identity of the rider is lost to history. Peele moves this beyond a binary racial critique. 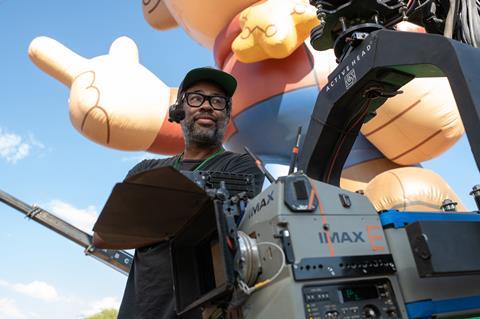 Writer/producer/director Jordan Peele on the set of Nope

“I set out to design something that criticised what we do as much as it honours it,” Peele says in production notes. “It reveals the lives of the skilled, below-the-line crew —the animal wranglers, cinematographers, technology experts—who create the indelible images we see on screen but who are never seen themselves. And it shines a light on the realities of discarded actors, particularly child actors, who are abandoned by the industry once they cease to be adorable bankable assets.”

“You don’t have to be a cinefile or an intellectual to be involved in the story,” says Monsour. “It can be funny and scary and, if looked at from a sideways angle, a social commentary.

“To me it’s a sci-fi horror as much as a documentary, and a dramatic and comedic project. There’s not really anything off the table.”

Editors face the same challenge on every movie which Monsour likens to putting together a jigsaw. “You start with a huge pile of pieces that someone has thrown in the air. Sometimes you have too few to make the puzzle, other times you have too many. We could have made 100 puzzles from what Jordan wrote and shot. 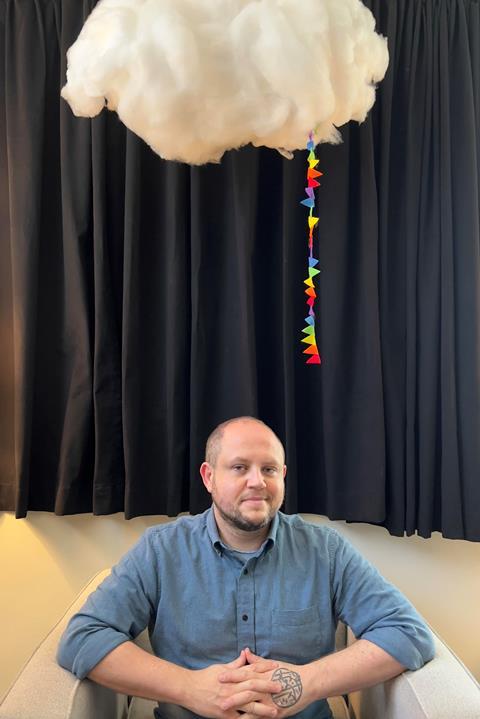 “Based on that, my process is to look at each beat, asking what is scary and which bit of the performance is funnier, and whether that performance would hit harder if we placed it an hour earlier. You’re constantly zooming in and out. It wasn’t a challenge to convey the film’s ideas other than to hone in on which ones we wanted to layer in more.”

Peele’s challenge to himself was to bring something impossible to the big screen, like King Kong or Oz. Part of the solution was sound design, on which Monsour worked with supervising sound editor Johnnie Burn (Under the Skin).

“While I was doing paper edits of a scene, Johnnie was sound designing using a library of wind effects to give Jordan every tool to help realise his vision,” Monsour explains.

“We are imagining abstract sounds for things that don’t exist but equally challenging is the creation of a reality in which, when the extraordinary happens, it is believable. That means paying attention to detail so you understand the sound of the location and to the sounds that might be heard subjectively in a character’s head.”

Another part of the solution was the camera work of DP Hoyte van Hoytema FSF NSC ASC (Dunkirk, Tenet) who was tasked with filming several sequences in the valley at night.

Shooting day for night is a classic cinematographic problem usually overcome by placing actors at a very specific direction into the sun, preferably backlit, and then darkening the image so that it looks as if the scene is lit by the moon.

The character of Antlers Holst is apparently based on Robert Shaw’s grizzled ‘Quint’ in another Spielberg classic Jaws.

However, after testing this option Peele and van Hoytema were not satisfied with the result. “We wanted to create nights that felt spacious, epic and grand and gave us the possibility to peer into the night. Yet at the same time, we didn’t want those nights to look fake in any way,” says van Hoytema.

They built a special rig which combined a variety of cameras (principally Alexa 65 with an infrared enabled chip) all perfectly aligned without parallax. 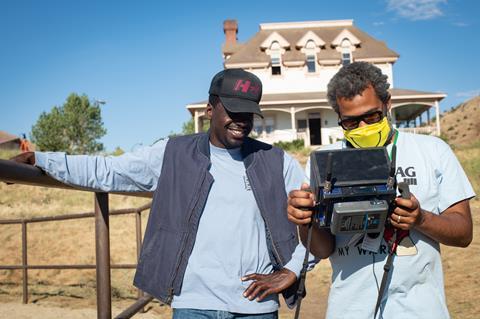 VFX supervisor Guillaume Rocheron enhanced the process for an effect that van Hoytema feels obtains “a magnitude that I haven’t really seen before unless it’s pure CGI. But CGI never looks as close or as tactile as these images do.”

Just as Steven Spielberg cast French director François Truffaut in Close Encounters of the Third Kind, so NOPE gets meta with the inclusion of a character who is a cinematographer. Antlers Holst (Michael Wincott) is a reclusive DP asked by OJ and Emerald to film a mysterious phenomenon that seems, in fact, to be unfilmable. 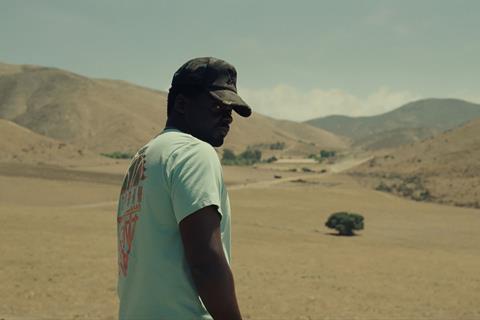 The character is apparently based on Robert Shaw’s grizzled ‘Quint’ in another Spielberg classic Jaws – a Captain Ahab obsessively pursuing the perfect shot.

Wincott shadowed van Hoytema to pick up some tips and the camera department supplied Holst with plausible equipment. This included an IMAX Mark II camera which had been into space aboard the Space Shuttle. The camera was re-engineered by Panavision with a hand crank so that it could be used without electricity - an important script element in the movie.

“Kitted out, [Holst] was even nerdier than most cinematographers I know in real life,” observes van Hoytema. “I wear a scarf as part of my day-to-day kit. And in the movie, you’ll see that Holst is wearing a scarf as well. It’s actually one of my scarves. Authenticity is very important.” 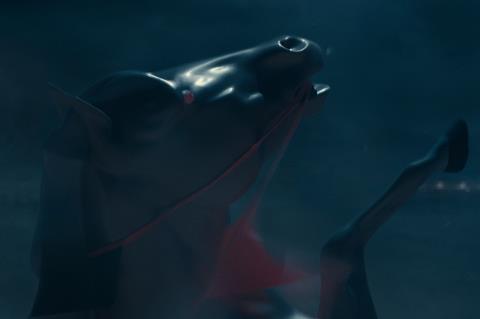 About 40 percent of the film is shot with IMAX cameras and nearly all the film is shot on Large Format 65mm, 5-perf film, with the exception of some 1997 sitcom footage which was shot on 35mm film, as would have been used at the time, and footage from the hand-cranked IMAX 35mm. Security footage depicted on monitors was shot with Blackmagic cameras.

To pull off “the quintessential flying saucer horror film,” the filmmakers had to take into account the huge canvas of the sky.

“Close Encounters is a huge influence of mine in its scope and in its vision,” explains Peele, “but more than anything, in Spielberg’s ability to make us feel like we’re in the presence of something from another world. That immersive experience was something I desperately wanted to chase as well.”

This required clouds to be in the exact same formation for three straight days of shooting or more, which is obviously impossible. Instead, the VFX team created a CG cloudscape system to art direct the composition and speed of the clouds. They spent nine months implementing this system which contributed the majority of Nope’s 700 VFX shots.

An engineering professor at CalTech helped conceptual artists to imagine how the alien entity would move and behave. They discussed ion propulsion and underwater animal biology (like jellyfish) as well studying origami for clues as to how the ‘creature’ might reveal its inner self.

Another inspiration was the hyper minimalism of ‘90s Japanese anime, Neon Genesis Evangelion, which has a “biomechanical design flair.”

One of the film’s most striking visuals features miles of brightly coloured sky dancers, a detection system for the alien entity. Gaffer Adam Chambers (Tenet, Ad Astra) and lighting console producer Noah Shain (Tenet) were responsible for programming and controlling the sky dancers, up to 70 of which featured in one scene.

Production designer Ruth De Jong adds another layer of thought: “There’s an underlying theme we’re addressing there—exemplified by the colour palette, like a bag of Skittles—that the sky dancers are in of themselves a representation of mass consumerism.”

Nope features a Gold Rush theme park called Jupiter’s Claim that is intended by Peele as an allegory for capitalism. It contains a gold-panning station, a sheriff’s office, and a Sea World-esque stadium, all built by De Jong at three-quarters scale. 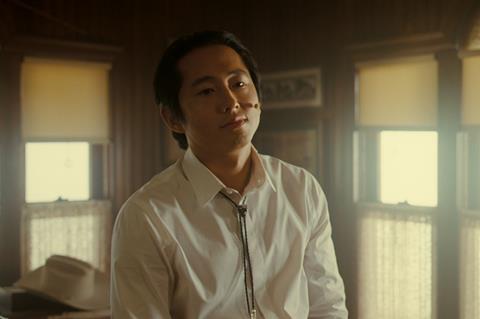 In the film, ‘Jupiter’s Claim’ is run by a former child star exploited and then discarded by Hollywood.

Now – and you really can’t make this up – the set for Jupiter’s Claim has become a permanent attraction on the world-famous studio tour at Universal Studios Hollywood opening day and date with Nope.

The teasing marketing campaign for Nope has kept audiences in the dark about what the movie is about and that’s a good thing, says Mansour.

“This is unlike anything I’ve seen before but there’s also a familiarity with great cinema of the seventies to the 2000s, and an organic poetry that originates from being shot on film,” he says.

“I like going into a movie not knowing all that much or being told what to think about it. I want to make up my own mind.”

Go behind the scenes of the latest TV and film productions with IBC365. Browse the Behind The Scenes archive